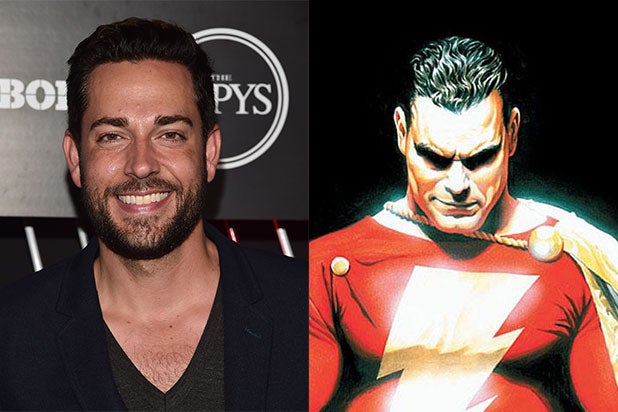 “Shazam” star Zachary Levi has sort of revealed the first official look at the costume for his superhero upcoming movie courtesy of a photo posted on his Instagram account Monday.

“This is what dreams are made of. Complete and total wish fulfillment, plus a beverage!” wrote Levi from the floor of the Las Vegas Licensing show.

This! This is what dreams are made of. Complete and total wish fulfillment, plus a beverage! ??’? All the squeees. #LicensingShowLasVegas #SHAZAMmovie #FirstLook? ????‍♂

“Shazam” is directed by “Lights Out” filmmaker David F. Sandberg from a script written by Henry Gayden and Darren Lemke. Production wrapped this month in Toronto.

Shazam, who was first introduced into DC Comics in 1939, is an acronym of the ancient world gods and historical figures — Solomon, Hercules, Atlas, Zeus, Achilles and Mercury — from whom William Joseph “Billy” Batson’s alter ego derives his heroic attributes when in adult form.

The film will also star Jack Dylan Grazer, Asher Angel, Grace Fulton, Cooper Andrews and Ian Chen. TheWrap exclusively reported last year that Mark Strong was in talks to play DC Comics villain Doctor Sivana in the New Line film. Sivana is known as Shazam’s archenemy and most frequent foe. TheWrap also exclusively reported that “This Is Us” actor and theater vet Ron Cephas Jones is in talks to play the Wizard in the film. The Wizard bestows all the powers on a teenage Billy Batson (Asher Angel) so that he can magically transform into a fully adult-size superhero (Zachary Levi).

DC will first release “Aquaman,” which is set for release Dec. 21 of this year. “Aquaman” stars Jason Momoa, Amber Heard, Nicole Kidman, Patrick Wilson and Willem Dafoe, and is directed by James Wan.