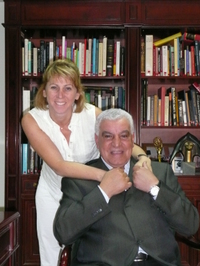 Here we are in Zahi’s office. (My new camera! Nice, right?) I sat for no fewer than six hours watching him work, an unbroken stream of letters, calls, signatures, meetings, convocations. No lunch break. One bathroom break. He called it the calmest day he knew in his office yet. I wanted a medal by the end of the day. Unfortunately, it was Zahi who got the medal, which was the Officer of Commander of Arts and Letters at the French embassy, followed by a cocktail party. The medal was green grosgrain with a bright enamel green star, bestowed by the ambassador. Zahi said the medal was nice, but he still would not drop his demand that the Louvre loan him the Zodiac ceiling of the Temple of Denderah. Then off he went to dinner somewhere, before leaving to the States tomorrow. I, on the other hand, will go to Luxor. (Also a useful evening, because I snagged an invite to the gala Bastille Day extravaganza on July 14 at the stunning French Embassy, a reconstructed Islamic-era palace.)