"I personally believe that (3D) is the future," director Robert Zemeckis told an audience that had waited all night for Comic-Con’s first-ever 3D presentation. "I’m excited about it because I think it’s a totally immersive way to see movies."

Kicking off the convention’s first event in Hall H at Con on Thursday, filmmakers Zemeckis and Tim Burton and the cast and crew from Disney’s "Tron" remake gathered to unveil previews from their new films. 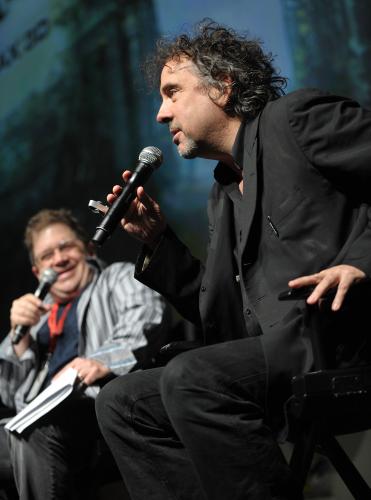 As everyone clutched their 3D glasses, Zemeckis took the stage, claiming the technology is the next big thing for the film industry. However, he was careful to note: "Not all movies should be in 3D. It’s another storytelling tool."

He said he wanted to retell the classic holiday tale of Ebenezer Scrooge because the original novel was "trippy and very cinematic" and "we now have the tools to pull off what Dickens originally wrote."

He presented a visually stunning, crisp clip in which Scrooge is haunted by the familiar ghosts of past, present and future — and the haunting figures pop out transparently into the audience. The actors in the film had to wear four high-definition video cameras on their faces that marked the mirror of the eye and the pores of the skin for movement, Zemeckis said..

In the film, Jim Carrey has a whopping eight roles. "The thing that’s great about Jim is that he’s a great actor," Zemeckis said. "And all great actors have a very keen sense of comedic timing … Of anyone working in the business today, I thought he’d be the perfect performance-capture actor. He can do absolutely perfect accents and create a character from inside of his entire being."

Next up was Burton, presenting the trailer from his "Alice," which panel moderator Patton Oswalt prompted him to play twice.

"Looks like a freak show, doesn’t it?" Burton said, looking up at the images of the characters on screen.

"Johnny (Depp) and I had worked together many times, but he’d never done a character with orange hair, so we scalped Carrot Top and took his hair," Burton joked — adding that Depp helped create his character’s wardrobe.

The director said he attempted to take the traditional fairytale and Jabberwocky poem and turn it into a moving story that was "not just a series of weird events."

But with a green screen, Burton said "speed and energy" was important because the screen "can start to freak you out after a while, and you don’t know where you are or who you are."

To the audience’s surprise, at the end of his Q&A segment, Burton brought out  Depp, who plays the Mad Hatter. (See video below.) The crowd erupted as Depp flashed his winning grin and waved for a few moments before departing the stage.

After Depp’s quick yet dramatic entrance and exit, the cast and crew of "Tron: Legacy" took the stage, including Jeff Bridges and Olivia Wilde.

When the first "Tron" was made back in the ’80s, Bridges said, the film seemed "new and fresh" because there wasn’t technology like cell phones or the Internet. "This film will have that same kind of effect," he said. "Everything will be superized."

A new clip from the film depicted Bridges’ son uncovering an original Tron video game from the ’80s. The crew also showed images of the updated machines, like "The Recognizer," the futuristic Tron City, the fifth generation Light Cycle and the Disc Wars game from the Gladitorial Games.

Back in 1982, the film was the first to use computer graphics. Nearly 30 years after the original debuted, Steve Lisberger was brought back to help maintain the original vision of the project.

"They’re making this cyber western world real … And it’s almost like the world of ‘Tron’ has become real. We didn’t go to space, there hasn’t been an apocalpyse and aliens didn’t show up."