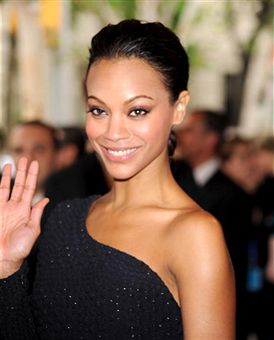 When I think of the Top 5 toughest women in post-1990 movies, the following come to mind. Linda Hamilton in "Terminator 2: Judgment Day"; Uma Thurman in "Kill Bill"; Angela Bassett in "Strange Days"; Juliette Lewis in "Natural Born Killers"; and Carrie-Anne Moss in "The Matrix." That’s pretty much The List.

However, Zoe Saldana’s triumphant turn as Neytiri in James Cameron’s "Avatar" has had me reconsidering those choices lately (being 7 feet tall helps), and the actress’s next project could cement her status as a woman who may be hazardous to your health should you cross her.

Saldana is in early negotiations to star in "Colombiana," an action-heavy drama that Luc Besson is producing through his EuropaCorp for Olivier Megaton ("Transporter 3") to direct, according to the Hollywood Reporter.

Saldana will play a young woman who grows up to be an assassin after witnessing the murder of her parents as a child in Bogota. By day, she’s a "hit girl" for her uncle; by night she’s a vigilante after the mobster responsible for her parents’ deaths.

The logline may sound very O-Ren Ishii-ish (Lucy Liu’s character in "Kill Bill"), but no one knows how to do bad-ass babes better than "La Femme Nikita" director Besson (except "Aliens," "T2" and "Avatar" director James Cameron, of course), whose past collaborations with "Colombiana" co-writer Robert Mark Kamen have yielded "The Fifth Element," "The Transporter" and "Taken."

While this announcement would be 10 times cooler if Besson were attached to direct instead of Megaton, Besson’s influence will no doubt be felt in every frame. With the exception of this year’s "From Paris With Love," I’ve enjoyed all of the films that Besson has only written and not directed, including Louis Leterrier’s "The Transporter" and "Unleashed" and Pierre Morel’s "Taken" and "District B13."

Saldana most recently starred in "The Losers" and "Death at a Funeral," and she next appears in the male-dominated action film "Takers."

"Colombiana" is set in the U.S. and Latin America, and production is scheduled to begin later this summer.