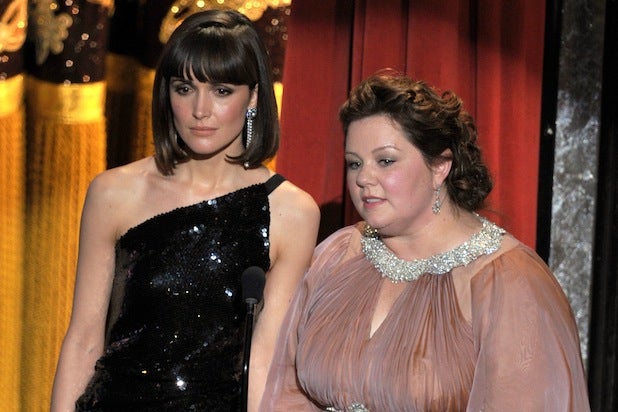 After working with Melissa McCarthy and director Paul Feig on “Bridesmaids,” Rose Byrne is in early talks to reteam with the duo on 20th Century Fox’s spy comedy “Susan Cooper,” an individual familiar with the project has told TheWrap.

“Susan Cooper,” which is being developed as a potential franchise in the same tone as “The Heat,” will be a realistic comedy about a female James Bond-type.

The two-hander project will shoot while McCarthy is on hiatus from her hit CBS series “Mike & Molly.”

Feig wrote the script and will produce through his Feigco Entertainment banner along with Jessie Henderson. Fox exec Daria Cercek will oversee the project for the studio.

There’s no deal in place, but should one close, “Susan Cooper” will put Byrne back in business with 20th Century Fox, which cast her as Moira MacTaggert in “X-Men: First Class,” as well as the female lead in “The Internship.”

Feig has publicly lamented the lack of female-driven projects in Hollywood, particularly after the surprise success of Universal’s hit comedy “Bridesmaids,” which grossed $288 million worldwide. His production company, which recently signed a first-look deal at Fox, is tasked with finding edgy R-rated comedies and other commercial properties in the vein of “Bridesmaids.”

Coming off the critical hit “The Place Beyond the Pines” and the commercial success of “Insidious: Chapter 2,” Byrne is poised for a big year in 2014. She stars in Universal’s comedy “Neighbors,” WB’s comedy “This Is Where I Leave You” and plays a key supporting role in Sony’s “Annie” reboot

The “Damages” veteran is represented by CAA.