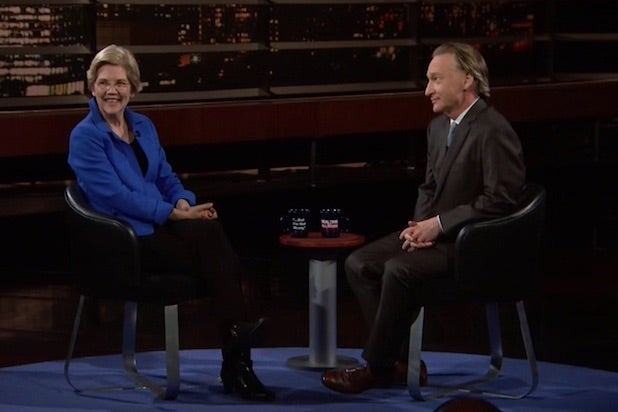 Bill Maher caught some side eye from Sen. Elizabeth Warren for calling her “Pocahontas,” President Trump’s favorite nickname for the Massachusetts Democrat.

The host of “Real Time” welcomed Warren on Friday night to talk about her latest book, “This Fight Is Our Fight: The Battle to Save America’s Middle Class,” but he couldn’t help but sneak in reference to Trump calling her “Pocahontas” earlier in the day while speaking in front of the NRA.

Maher and Warren were talking about the tax plan the GOP presented Friday morning. “I’ve seen Republican tax plans like this but not quite as brazen because this one doesn’t even pretend. It’s just about, ‘wouldn’t it be great if rich people didn’t pay taxes?'” Maher said. “But he’s going to go to a rally in Harrisburg, Pennsylvania tomorrow and tell his fans all about this and how his kids are going to have to pay taxes because he got rid of the estate tax and they’re still with him. They’re not with you. Explain to me what that disconnection is.”

Warren pushed back, saying she disagreed with Maher’s take. And he, in turn, playfully shoved back.

“Oh, come on. They don’t like you, Pocahontas,” he laughed, as did the audience. Warren broke a slight grin, but remained silent, gave him “side-eye” and continued her train of thought.

Warren went on to say she attended Trump’s inauguration because she “wanted it burned into my eyes.” But it wasn’t the day he was sworn into office that Warren believes will be remembered — it’s the days that followed.

Maher concluded the interview by saying, “Donald Trump today was talking about running against you next time. No pressure!” to which Warren responded with a smile… and the audience responded with a cheer.