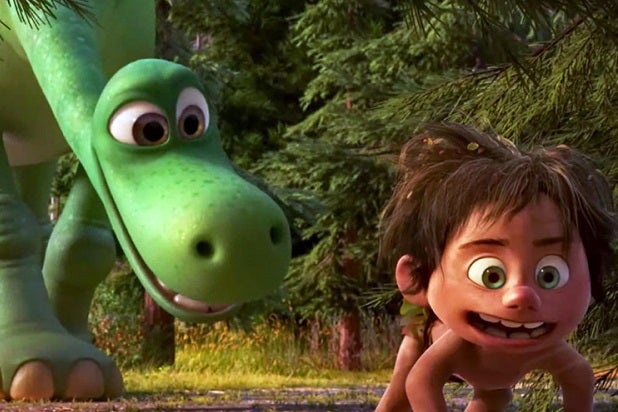 “The Good Dinosaur’ shows they’re human over there at Pixar Animation after all. The 3D family film is pacing to be the first loser at the box office for the company, which has had an all-but perfect record over nearly three decades.

“The Good Dinosaur” is the Pixar’s 16th release and could be the studio’s lowest-grossing ever. It has taken in $118 million since opening domestically on Nov. 25, and with $149 million from overseas its worldwide haul is $266 million. That’s not terrible, but it doesn’t offset the movie’s $200 million budget or measure up to Pixar’s unparalleled box office track record. The previous low-earner was the $362 million global haul of the original “Toy Story” in 1995, so it’s in some pretty good company.

Pixar movies have brought in more than $6.9 billion and averaged more than $600 million in global grosses since 1986. They’ve also picked up 12 Academy Awards along the way, including Best Animated Feature seven times for “Finding Nemo,” “The Incredibles,” “Ratatouille”, “WALL-E,” “Up,” “Toy Story 3” and “Brave.”

“The Good Dinosaur” took a rocky road to its release. Production began in 2009 with Bob Peterson and Peter Sohn as co-directors and targeted a Thanksgiving 2013 release. That date was pushed ahead one year in 2012, and the following year, story problems prompted Pixar President Ed Catmull to make Sohn the director and bring in Denise Ream as producer.

In the summer of 2014, Disney pushed the movie to its current date, giving Pixar two releases in one year for the first time. The original voice cast was replaced about five months before its release, and Sam Elliott, Anna Paquin, A.J. Buckley, Steve Zahn and Frances McDormand were among those who came aboard. The critics were OK with it (76 percent positive on Rotten Tomatoes) and the fans that did go gave it an “A” CinemaScore.

“It’s not like they didn’t see this coming,” said Exhibitor Relation media analyst Jeff Bock, referring to the director switch and a storyline shift. “It didn’t seem to have the creativity or gravitas of previous Pixar releases. But in the long run they may learn something from this experience, and they’re going to be fine.”

Pixar began as the computer division at Lucasfilm and was spun out in 1986 with funding from Apple Inc. co-founder Steve Jobs. When Disney acquired Pixar in 2006 for $7.4 billion, Jobs became Disney’s biggest shareholder and a board member.

Currently headed by Catmull, Chief Creative Officer John Lasseter and President Jim Morris, Pixar is back to a single release in 2016 and it looks like a box office whopper. “Finding Dory,” a sequel to the 2003 blockbuster “Finding Nemo” returns director Andrew Stanton and voice cast including Ellen Degeneres and Albert Brooks. It debuts on June 17 and could wind up as 2016’s top-grossing film.