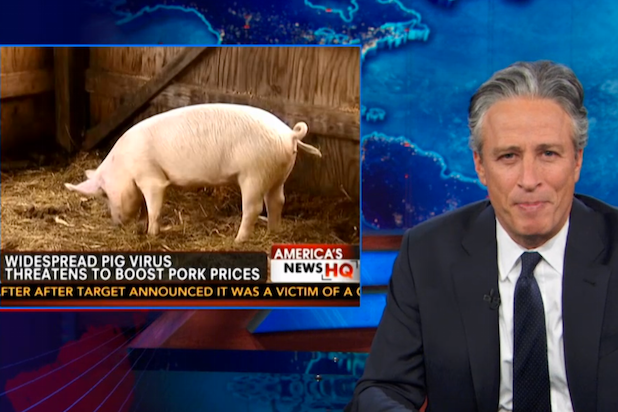 Bad news snacking Super Bowl lovers, a number of food shortages across the country could impact football fans with a case of the munchies, Jon Stewart told “The Daily Show” viewers on Monday’s program.

“This year, the match-up is between the Seattle Seahawks and the Denver Broncos, two teams hailing from states that have legalized marijuana,” Stewart said. “Which makes this year’s shortage all the more tragic.”

However, some reporters are getting to the bottom of claims by Velveeta that there may be not enough of the processed cheese on store shelves to meet consumer demand. One newscaster noted that a visit to area supermarkets revealed that there was plenty of the gooey stuff to go around.

“Are you implying that the makers of Velveeta would attempt to pass off as real some sort of blatantly artificial, clearly unnatural, synthetic creation?” Stewart asked. “You sir, clearly don’t know Velveeta.”

Threats to Super Bowl cheese dips everywhere aren’t the only food-related danger to the big game. An outbreak of porcine epidemic diarrhea virus has been reported in several states, potentially making pigs in a blanket a dicey proposition.

“Porcine diarrhea virus, we’ve all been there,” Stewart said.

Yet Stewart was able to find the bright side to the possibility that pork might be a no-show at Super Bowl parties.

“It means America has less of the thing that is killing us,” Stewart said. “Oh no a bacon shortage, but that means type 2 diabetes rates could fall dramatically, extending our lives and saving us billions in healthcare. Why, God, why?”

“If there’s one risk America’s not running, it’s not eating too little bacon,” Stewart said.