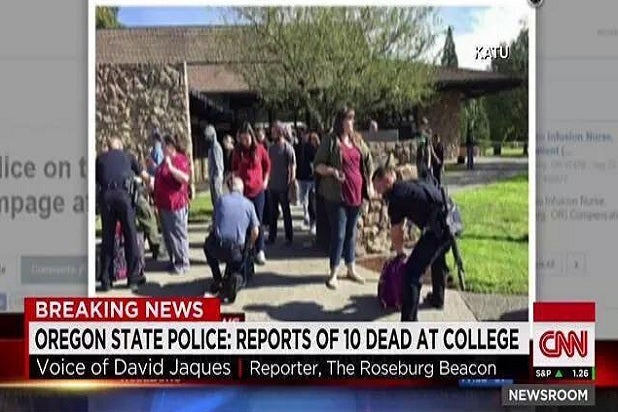 The gunman who killed nine people during a deadly rampage at Oregon’s Umpqua Community College on Thursday took his own life after the killing spree, authorities said Saturday.

The Oregon State Police are conducting the investigation into the death, characterizing it as an “officer involved shooting.”

See video: Stephen Colbert on Oregon School Shooting: 'I Honestly Don't Know What to Do or Say'

Douglas County District Attorney Rick Wesenberg said that he will review the case when the police investigation is completed, which he said should be soon.

“It is my understanding that the officer-involved shooting investigation being conducted by the Oregon State Police is nearing conclusion. I expect to be presented with the case early next week,” Wesenberg said. “Once I receive the case, I will do a thorough review and make a determination on whether the use of force was justified.”

During a press conference Thursday, Douglas County Sheriff John Hanlin said that “at least two heroic officers” exchanged gunfire with the shooter. While Hanlin declined to name the suspect, saying, “I will not give him the credit that he probably sought prior to this horrific and cowardly act,” he has been identified as 26-year-old Chris Harper Mercer.

During a press conference Saturday, Hanlin said that the suspect was reported down two minutes after police reported exchanging gunfire with the suspect.

Mercer’s family said in a statement that they were “shocked and deeply saddened” by the shooting.

“We are shocked and deeply saddened by the horrific events that unfolded on Thursday, October 1,” the family said. “Our thoughts, our hearts and our prayers go out to all of the families of those who died and were injured.”