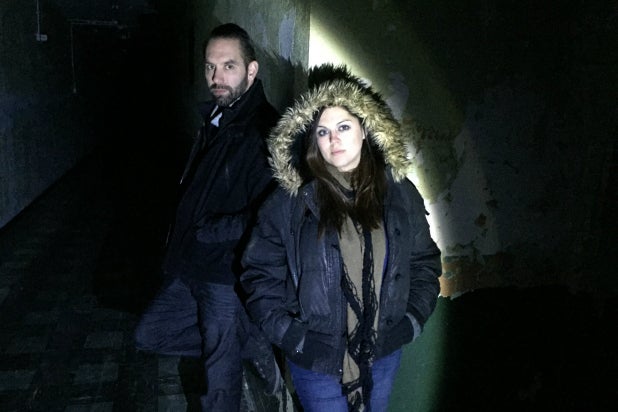 Destination America has ordered six-part ghost-hunting series “Paranormal Lockdown,” which will be hosted by Nick Groff and Katrina Weidman.

The series will follow the two as they confine themselves to America’s most terrifying places for an unprecedented 72 hours straight, per the Discovery Communications cable channel. Living at haunted locations, many of which have never before been seen on television, with some being investigated for the first time ever. Groff and Weidman believe that the longer they stay, the more the spirits will communicate with them and the more information they can gather about the unknown.

“As valued fixtures of the paranormal community, Nick and Katrina have years of thrilling investigation under their belts and join the Destination America family with huge support from their fans,” said Jane Latman, general manager of Destination America. “Overnight explorations are a staple of ghost hunting, but “Paranormal Lockdown” supersizes the suspense in a round-the-clock, multi-day investigation that has never been conducted before on a paranormal TV series.”

“Living with the dead was a whole new experience for me and Katrina, giving us the opportunity to  document some incredibly enticing evidence about the afterlife that we can’t wait to reveal to ‘Paranormal Lockdown’s’ viewers,” added Groff, who also serves as an executive producer on the show.

“Paranormal Lockdown” debuts Friday, March 4 at 10 p.m. ET Destination America. Below is some more information about the hosts and producers, in the cable channel’s own words.

Nick Groff has been fascinated with the paranormal ever since surviving a near-death experience as a child. Now, he chases ghosts full-time with the goal of finding new evidence of the afterlife and discovering a breakthrough in paranormal research. After graduating from the University of Nevada with a B.A. in Film, Groff made his big break when he co-wrote, co-produced, co-directed, co-edited, and co-starred in “Ghost Adventures: The Original Documentary,” which aired on the SciFi Channel in 2007. The film was a winner at the Los Angeles Film/Video Festival and was nominated for “Best Feature Film” at the Eerie Horror Film Festival. The documentary served as a pilot for the Ghost Adventures television series that debuted in 2008 on Travel Channel. Groff was an executive producer, co-host, and investigator on Seasons 1-10. Groff is also the author of the book “Chasing Spirits: The Building of the Ghost Adventures Crew.”

Katrina Weidman is paranormal researcher and investigator, host, producer, and lecturer. She’s best known for her role on A&E’s hit series “Paranormal State,” in which she worked on hundreds of cases of unexplained supernatural phenomena and interviewed thousands of witnesses with the world-renowned Paranormal Research Society (PRS) from 2006-2011. A graduate of the Pennsylvania State University, Weidman has been working professionally as a paranormal researcher and investigator since 2006, but her passion for the supernatural began when she was a child living in historic Bucks County, Penn., where many locations are said to be haunted. Weidman also hosted Chiller’s “Real Fear: The Truth Behind the Movies,” following Weidman and her team as they travel the country looking for the real-life stories that inspired some of the world’s most iconic horror films.