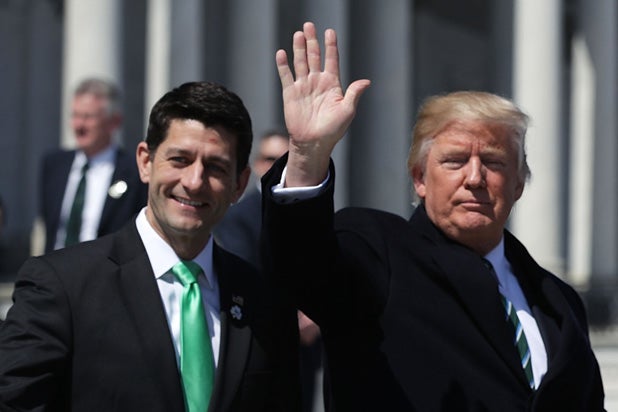 In an embarrassing setback, House Republicans abandoned a health care bill on Friday that would have repealed and replaced the Affordable Care Act. It happened after GOP Speaker of the House Paul Ryan informed President Trump that he was unable to whip up the number of Republican votes necessary for the bill to pass.

The bill’s extreme unpopularity (it was polling at 17 percent on Friday morning) was bad enough, but the failure to get it passed exposed deep divisions within the Republican party. As a result, detractors of the repeal-and-replace strategy are having a field day on Twitter, mocking both Trump and Ryan for failing utterly to achieve a goal Republicans have considered a top priority since 2010.

In the world of politics, Democrats and their allies were ecstatic. Like New Jersey Senator Bob Menendez, who came at Trump and Ryan with an oldie but goodie burn unit joke.

Hey Republicans, don't worry, that burn is covered under the Affordable Care Act

Planned Parenthood was similarly thrilled. After all, the GOP bill was designed in part to gut the organization’s funding (and deny women affordable coverage for everything from mammograms to maternity leave).

The good news is: They can still come to Planned Parenthood. #IStandWithPP https://t.co/2NixyI1Rq9

Meanwhile, Pete Souza, White House photographer under Barack Obama, posted this photo, taken during the effort to pass the Affordable Care Act in 2010, to his Instagram account.

Before voting on the Affordable Care Act in 2010, President Obama met with many members of Congress on both sides of the aisle over the course of many months. This picture was taken at the end of a multiple hours-long meeting with the entire Republican House caucus in which he responded to dozens of questions and critiques. It was carried live on cable TV.

But of course, many, many people laughed and laughed.

I'm starting a new wine label called "Chardonnfreude": a crisp white that pairs perfectly with watching the implosion of your foes. Cheers! https://t.co/S1K7Ag9o41

Speaker Paul Ryan says the nation will be ‘living with #Obamacare for the foreseeable future.’ #AHCA #RyanCare #ACArepeal #TrumpCare pic.twitter.com/oHWsJ8rkj8

"Hey everyone look at me, I'm Donald Trump, I wrote the Art of the DEAL!, We'll get it passed!" BWAAAAAAAAAAAAH AHAHAHAHAHAHAHA#KillTheBill pic.twitter.com/NXgYF0GBBc

Donald changing his Facebook status with healthcare to "it's complicated" pic.twitter.com/5VxOGLRBxG

Lol when you pull out cause you don't have a plan B pic.twitter.com/vMCSahyPtr

Trump will want to pass the blame, as if #Trumpcare wasn't his even though he campaigned for it. Ryan will be the scapegoat. Popcorn please.

Congratulations @realDonaldTrump on your complete and utter failure on repealing ObamaCare. #Loser pic.twitter.com/FEyziQo6RL

Even though they made their bill even meaner and more hateful toward women and kids, it wasn't anti-woman enough for the Tea Party Reps.

Trump has blinked. So much for the Art of the Deal. #loser @realDonaldTrump

Speaker Ryan had +44 Republicans and still couldn't get healthcare passed. Just goes to show what happens when you give a man a woman's job!

Naturally, Netflix’s “House of Cards,” which has had a lot of fun at Trump’s expense over the last year, joined in the fun.

But it wasn’t all mockery of course. Democratic Presidential candidate and popular vote winner Hillary Clinton, for example, celebrated the defeat of Trumpcare, calling it “a victory for all Americans.”

Today was a victory for all Americans. pic.twitter.com/LX6lzQXtBR

Some, like actor Mark Ruffalo, congratulated those who worked to defeat the GOP bill.

Congratulations to the #Resistance for win on Health Care. Decency won, driven by you! Humbled to stand shoulder to shoulder with you!

Other well meaning people thanked members of the GOP who opted to oppose it, even if in doing so, they politely ignored that GOP opposition stemmed largely from thinking the bill didn’t go far enough in reversing Obamacare.

Thank you to those house republicans who were brave enough to know that party line isn't an excuse for bad legislation for all Americans.

As for Republicans — Ana Navarro aside — let’s just say many of them were open about being disappointed that 24 million people didn’t lose access to health care.

Unfortunately, Paul Ryan didn't give him that bill. https://t.co/oIdLXtN1wY