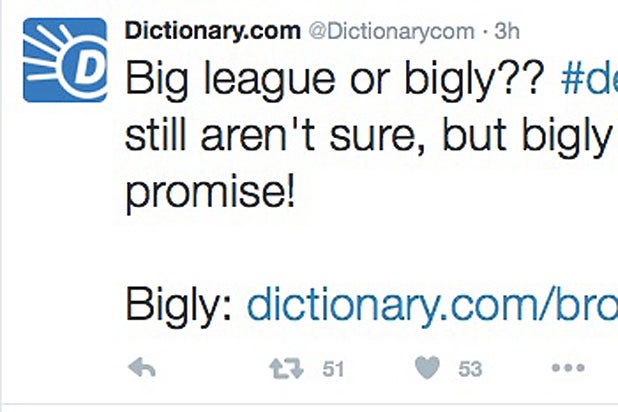 Donald Trump and Hillary Clinton battled it out in the final presidential debate on Wednesday night and as usual, the GOP nominee made waves, this time for using a word that is now sweeping the nation: “Bigly.”

“We’re going to speed up the process, bigly,” Trump said when referring to immigration. We Think.

Dictionary.com chimed in, verifying that “bigly” is an actual word. However comedian Bill Maher disagrees, tweeting, “Is ‘bigly’ a word? No, its not. That should be disqualifying itself!”

We’re going to believe Dictionary.com on this one, but the word will continue to get mocked and will probably have a mention on “Saturday Night Live” soon, especially as at one point, 64 percent of people on Dictionary.com were looking it up.

The website says “bigly” is a adverb meaning “biggish.” It lists synonyms as huge, immense, bulky, capacious, voluminous and extensive. Who knew?

Big league or bigly?? #debatenight We still aren't sure, but bigly IS a word, we promise!

64% of our users are looking up "bigly" right now.

("Big league" is only 0.04% of our active lookups, to put that in perspective.) #debate

"Bigly" is still overshadowing all other lookups, but we also see "condemn" in our top 5 searches right now from the #debate

Our closing remarks: Very interesting words spiked in our searches tonight from the #debate:

Well. . . . .I think someone lost the #debatenight BIGLY!

What's a nasty woman to do? We'll vote in numbers so huge. Bigly. #debatenight

I am concerned with the outcome of this election….bigly???? #debatenight

3rd debate. And I still dont know. Is it #bigly or #bigleague?! Goddamit man, enunciate. #debatenight

Okay I missed bigly tonight and saw it trending, thought it was an album or something. Nope just #Trumpism #debatenight

I tried to type "bigly" and my iPad autocorrected to "bigot."

Is "bigly" a word? No, its not. That should be disqualifying itself!