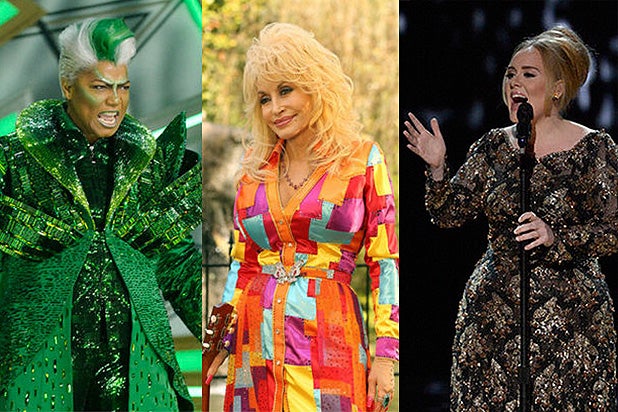 NBC’s “The Wiz Live!” eased on down the road to ratings gold last week. The special  drew 11.5 million total viewers and was the most social live entertainment program ever, according to Nielsen. Thursday night, the network will premiere an original film, “Dolly Parton‘s Coat of Many Colors,” built to capture some of the same excitement.

“Coat of Many Colors” is a faith-based film inspired by the country singer’s song about her childhood. It’s also a far less ambitious production than “The Wiz,” unlikely to draw as many viewers. But NBC hopes that it will pull in an audience the same shape, if not the same size, as the one that tuned in to “The Wiz.” It hopes the same for specials “Michael Buble’s Christmas in Hollywood,” also scheduled for Thursday, and “Adele Live in New York City,” slated for Monday. Such programming events meant to make viewers watch in real time with loved ones instead of alone in bed on their laptops have become key to NBC’s strategy, and it’s a tactic being emulated elsewhere.

“It’s hard to come up with things that are great and high quality and don’t feel old fashioned or syrupy when you go into family programming,” NBC Entertainment Chairman Bob Greenblatt told TheWrap. “We do a lot of 10 o’clock dramas. We do a lot of sophisticated stuff. But there’s a place for more of this family-friendly programming.”

As more cable and streaming brands dive into original scripted programming, broadcasters have embraced the darkness pioneered by their competitors. Limited series, anthologies and morally gray dramas populated by anti-heroes — ingredients employed liberally at HBO, FX, Netflix and the like — have now become popular with free TV networks.

NBC is no exception. But its efforts have been less successful than ABC’s Golden Globe-nominated “American Crime” or Fox’s just-renewed “Wayward Pines.” Miniseries “The Slap,” about white-people problems in tony Brooklyn, was low-rated and widely panned. Serial-killer drama “Hannibal,” though critically acclaimed, was canceled in August, having never connected with big audiences or awards voters.

But NBC has fared far better with brighter, splashier fare. The network’s first live musical under Greenblatt, “The Sound of Music Live!” was mocked by critics and social-media users for its stunt casting of country-music star Carrie Underwood in the role of Maria Von Trapp. Last year’s follow-up, “Peter Pan Live!” drew similar criticism thanks to Christopher Walken‘s weird turn as Captain Hook. But whether they were hate-watching or not, viewers tuned in.

“The Sound of Music” drew 18.6 million viewers in live-plus-same day ratings. “Peter Pan” drew 9.2 million. Despite the ratings drop off between the two, NBC doubled down on family-friendly events post-“Peter Pan,” announcing plans to make “The Wiz” its third live December musical, signing a deal with Parton for multiple movies, and leveraging Adele’s appearance on “Saturday Night Live” into a Radio City Music Hall performance that was her first concert in four years.

That those efforts are all bearing fruit in December telecasts is no coincidence.

“December is filled with specials,” Bill Carroll, vice president and director of programming for Katz Media Group, told TheWrap. Where NBC stands out is in its approach to those specials, which emphasizes programming events. “Live is important and family is important. That’s what differentiates them.”

December also presents scheduling challenges for broadcasters, with holidays disrupting the calendar and viewers traveling. As in olden times, broadcasters still suspend new episodes of most drama and comedy series in response. But viewers now have a multitude other original-programming options on cable and streaming. A month given over to reruns would be a lost month for broadcasters.

NBC would have more to lose than most in such a month. It’s coming off two consecutive seasons as the No. 1 rated network in Nielsen’s advertiser-coveted 18-49 demographic. It enters midseason with a healthy lead on its competitors, averaging a 2.9 demo rating, four tenths of a point ahead of No. 2 CBS.

A strong performance through the December holidays would help NBC carry its momentum into January and February, when series will return from midseason hiatus and CBS will host the Super Bowl. And with kids off school and families spending more time together, increased co-viewing — industry speak for household members watching TV together — becomes more likely, thus making a strong performance more achievable. Sort of.

“What I mean by co-viewing is kids are watching and adults are watching,” Greenblatt said. “If you went into everyone’s house with a secret spy camera to see how people are really watching, I don’t know if they’re necessarily in the same room together or on the same device.”

Regardless, NBC has a long history of holiday event programming meant to appeal to family members in any room of the house. The Macy’s Thanksgiving Day Parade and the Rockefeller Center Christmas tree lighting ceremony had each been on the network for decades when Greenblatt took over in 2011. They provided a scheduling foundation on which to build more such programming.

“Maybe we’ve just had them in our DNA more,” Greenblatt said of the family-themed specials. “Or maybe I just like them.”

Although NBC has pursued a family-event strategy more aggressively than its competitors, the network is leading by example. Having just aired a holiday special hosted by “Empire” stars Terrence Howard and Taraji P. Henson Wednesday night, Fox will debut its first live musical, “Grease Live,” on Jan. 31.

“I’m rooting them on,” Greenblatt said of Fox’s musical. He also noted that ITV in the U.K. is now planning its own live version of “The Sound of Music.” “We’ve turned this into a thing, and that makes me really happy. I think it’s great if it’s a new genre of programming.”