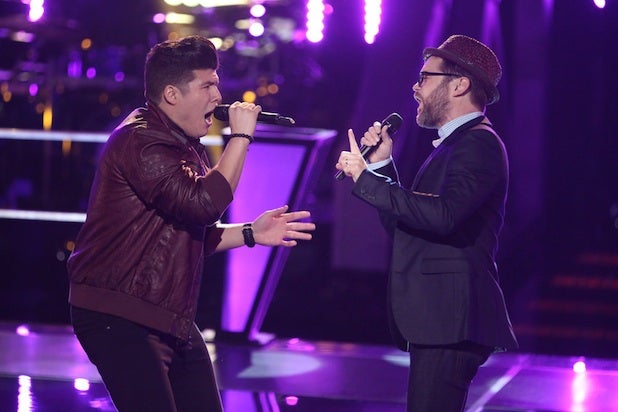 This was the last wave of Battles: Round 1 on season 6 of NBC’s “The Voice,” so let’s gather around the campfire and chat my favorite and least favorite moments from this week’s episodes.

1. Words with friends like Shakira
Nobody wants to play scrabble with Shakira, because she’ll hit you with a high point word like “oscillating,” and you’ll never see it coming! She can even use it in conversation, so watch out, y’all.

2. Favorite battle
My favorite battle this week would have to be Team Adam’s Austin Ellis versus Josh Kaufman. Coach Adam Levine‘s pairing of the two on “Happy” produced the most genuinely fun duet all week. Austin came armed with a gravelly tone, an imaginary microphone and energy to burn. However, Josh’s voice continued to amaze, and Adam had no choice but to hold onto the 38-year-old father of three.

3. Most nonsensical mentor advice
Team Adam mentor Aloe Blacc gave Austin and Josh the following pre-battle advice: “You’re battling against the old you…you’re gonna go out and present the new you; make yourself proud.” This makes no sense, you guys. Is he flying over ideas from Matthew McConaughey‘s Oscar speech? Is Aloe 10 years from now sending us a coded message? Future Katrina is confused.

4. Us against the world
Two sets of duos competed against solo artists this week with very mixed results. The two against one scenario served Team Adam’s Dawn and Hawkes well in their battle against Josh Murley. Their chemistry during the low key “Stuck in the Middle with You” gave them enough of an edge to win, while Josh aka “The Third Wheel” also won a steal via Shakira. The duo dynamic didn’t deliver the same happy ending for Team Blake’s Alaska and Madi. Their aggressive, precise vocal style worked well for “When Will I Be Loved,” but Audra McLaughlin’s more honeyed tone cut through their harmonies and earned her the battle win. Duos: 1. “The Voice”: 1.

5. Potential vs experience
Team Shakira’s 16 year old Deja Hill has all the potential in the world but very little experience. At 28, Music Box (let’s call her MB) has tons of experience, but isn’t necessarily as adaptable. Put them together, and you get what was easily one of the most underwhelming battles of the week. Deja was too tentative on “Eternal Flame,” while MB was too over the top, but ultimately both artists were saved – deja via coach Shakira and MB via a steal by coach Usher. Now that everyone’s safe, can we just take a moment to reflect on the fact that someone chose to take the artist name “Music Box?”

6. A tale of two teenagers & one fair city…
Two teenagers, one city (Provo, Utah), one song and lots of feigned affection equaled one adorable duet for Team Usher. After pairing Madilyn Paige and Tanner James on “Everything Has Changed,” Usher immediately encouraged them to dig into the romantic nature of the song. He had them sing to each other from across the room like star-crossed lovers and talk about their feelings in an effort to amp up the warm and fuzzy feelings. These unconventional methods paid off when they gave a gorgeous performance that Adam compared to “watching golden retriever puppies frolic through fields of wheat…” Usher chose the lithe-voiced Madilyn, but I’m sure viewers at home were sad to see Prince Charming go home.

7. Best mentor advice
Team Usher mentor Jill Scott gave some of the best advice of the week when she instructed Madilyn and Tanner to “Be starry-eyed. Be in love. Be an actor as well as a singer.” Truth, Jill. Truth (call me??).

8. Time for Buble!
There’s no time like the present for a little Michael Buble, and Kaleigh Glanton and Noah Lis were the only Team Blake members lucky enough to get a solid dose of Buble. Their duet of “Everything” was clearly more geared towards Noah’s vocal style, but Kaleigh put her own distinctive stamp on it, at times singing circles around Noah, and winning the battle for coach Blake Shelton’s favor.

9. Guts and glory
Team Shakira’s Cierra Mickens and Emily B. are both very brave ladies – Cierra for living in the unforgiving tundra that is Alaska and Emily for surviving potentially catastrophic brain surgery…it was only natural that Shakira would pair the two on “Brave.” While Emily’s lovely vocal presence lends itself more readily to the song, Cierra’s power gave it the “guts and glory” that mentor Miranda Lambert recommended. Despite a shaky start, both girls ended the song with a bang, and the individual performances were pretty evenly matched. Shakira, inspired by Emily’s story and range, kept her in the competition, leaving Cierra available for a steal via Usher. Happy endings all around!

10. Battles: Round 2?
Does anyone actually understand the point of a second round of battles, beyond Chris Martin coming on to make a few ladies swoon? And when I say “a few ladies,” I mean ME.

Coming up: Usher wears a furry creature on his head, and Adam’s sweaters all look the same.

If you’re in the L.A. area, join for a show at The Hotel Café Thursday, April 10th (tickets available here!). And don’t forget to check out my album “In & Out of the Dark,” which is available on iTunes NOW. For more updates, follow me on Twitter at @katrinapmusic and visit my website, katrinaparker.com.