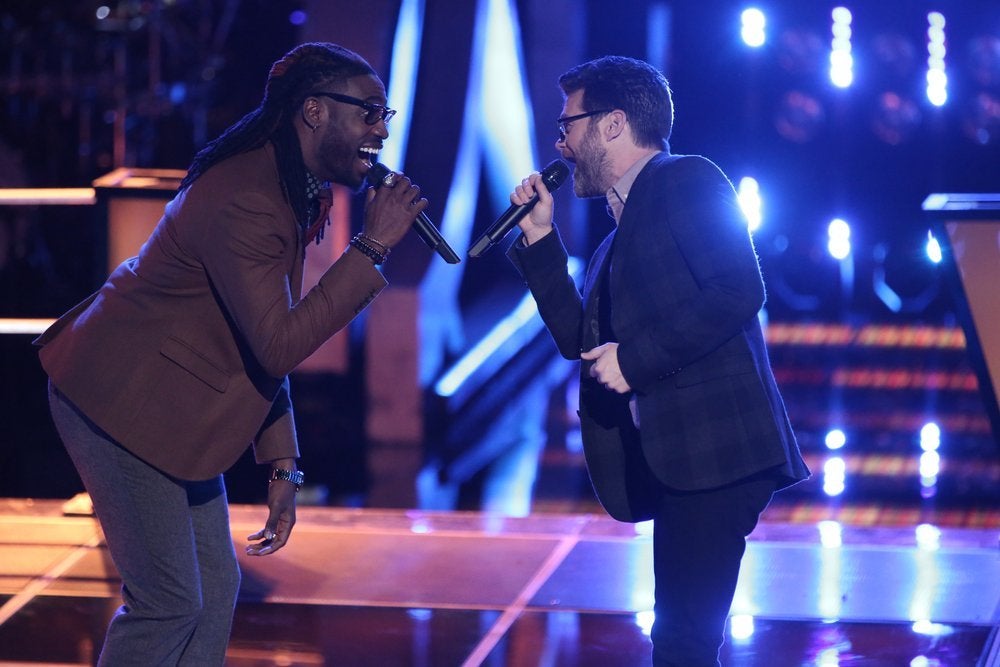 This is the first week of Battles: Round 2, a new addition to NBC’s “The Voice” format. The only things differentiating it from the previous round are 1) duos pick their own song (from a short list), 2) there is only one steal per coach left, and 3) Coldplay’s Chris Martin. Let’s have a cup of PG Tips (in honor of Mr. Martin) and chat my highlights from the last two episodes.

1. Unofficial theme song of “The Voice”
The week kicked off with coach Blake Shelton’s pairing of country balladeer Audra McLaughlin with rocker Megan Ruger. While Megan’s more precise approach worked well for “The Climb,” it quickly became clear the song was better suited to Audra’s honeyed tone. Blake gave Audra the win, noting “The Climb” could easily be the theme song for everyone on this show.

2. Oh hey, Chris Martin!
The most exciting aspect of a second battle round is the addition of Chris Martin as mentor to all four coaches. Not only did he send the contestants into fits of fan girling, but he was also incredibly charming this week – asking “Does she twerk in that song?” in response to Miley Cyrus‘s “The Climb” and suggesting Harry Styles as a romantic motivation for Deja Hall. Most importantly, I think we all enjoy hearing Blake say, “This is my new friend Chris Martin,” because how weird is that??

3. Windsurf into my life…
Coach Usher called his pairing of Cierra Mickens and T.J. Wilkins “the battle of the soul singers,” and their song choice (my go-to karaoke jam “Get Here”) delivered one of the best duets of the week. It also gifted us with the sight of T.J. giddily recounting how he and mentor Chris Martin bonded over the line “You can windsurf into my life.” Both contestants did a beautiful job, but ultimately T.J.’s more pliable voice earned him the win.

4. Feel-good battles
Some of the best battles on this show are the ones that are the least cutthroat, where contestants seem to genuinely like each other and enhance their partner’s strengths. Jake Worthington and Tess Boyer are a perfect example. The Team Blake duo merged Jake’s country style with Tess’s pop style and gave a connected and engaging performance of “Have A Little Faith In Me” that allowed them both to shine. Blake awarded the win to Jake for his fierce rendition, but the surprising Tess also won a steal via Shakira after all three coaches turned their chairs to fight for her.

5. When Battles: Round 2 falls flat
One problem with repeating the basic conceit of the last round is that battle fatigue has already set in. The show’s attempt to squeeze human drama out of the lackluster performances of Team Shakira’s DDendyl versus Deja Hall and Team Adam’s Christina Grimmie versus Sam Behymer might have worked last week, but now we’ve been there and done that. If the battles aren’t excellent or close to excellent, they just fall flat like these pairings.

6. They came two by two
Coach Shakira is a little like Noah, taking fleeing Team Adam members onto her arc in groups of two. This week’s two consisted of Josh Murley and Patrick Thomson. While Josh’s voice was more technically impressive on “Run to You,” Patrick won the battle with his distinctive tone and expressive performance, earning himself a spot in coach Shakira’s Top 5.

7. Drop the mic!
In the best and most evenly matched performance this week, Team Adam’s Delvin Choice and Josh Kaufman tore through “Signed, Sealed, Delivered” like their lives depended on it. While Josh was the more obvious choice to win, Delvin shocked everyone (including coach Adam Levine) with his powerful, roaring vocals, showing clear improvement since the last round and meeting Josh note for note. Both had some fantastic moments, but Adam chose the infectious Delvin, leaving Josh available for a steal via Usher.

8. What planet did you come from, and can I go there?
Team Blake’s Sisaundra Lewis has an incredible voice that is not of this earth, and Biff Gore has a jaunty sidekick that makes the world go round. Their duet “It’s a Man’s, Man’s, Man’s World” was my personal favorite this week. It gave Biff the chance to demonstrate his lived-in style while allowing Sisaundra to do what Sisaundra does best – blow everyone away with her stunning vocal prowess and range, earning herself a spot in Blake’s Top 5.

9. My buddy
What’s the deal with that furry creature sitting atop Usher’s head this week? Is it an old childhood friend? A talisman that gives him good luck? Who knows, but he’s making it work.

10. Most satisfying steal
Team Usher’s Stevie Jo rightly won his battle against Morgan Wallen after their duet “The Story of My Life,” giving a strong performance that showed off his vocal dexterity. However, the real story of their battle was watching Morgan discover parts of his voice he didn’t even know existed. That was irresistible to Adam who gestured him over to do a fist pump on his way out, then pressed his button for a heartwarming, last minute steal.

Who were your favorites this week? Also, how do you feel about the news that Pharrell Williams will be taking CeeLo’s place next season? One of our faithful commenters suggested this weeks ago (good call!). This is a HUGE catch for the show, but will Arby’s let Pharrell borrow his hat back for this special occasion? Leave your predictions in the comments.

If you’re in the L.A. area, join for a show at The Hotel Café Thursday, April 10th (tickets available here!). And don’t forget to check out my album “In & Out of the Dark,” which is available on iTunes NOW. For more updates, follow me on Twitter at @katrinapmusic and visit my website, katrinaparker.com.