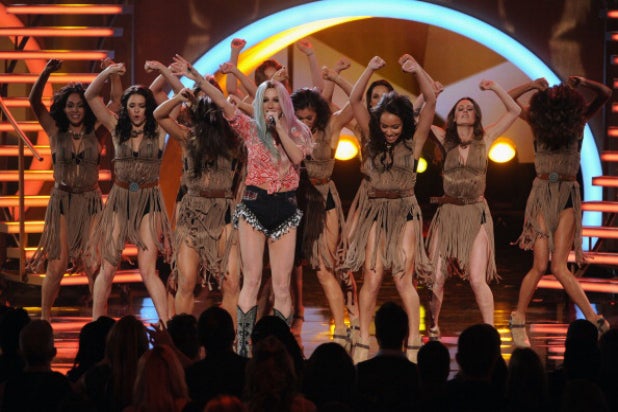 The 2013 American Music Awards are in the books, and from what viewers saw, the night was a particularly successful one for Taylor Swift, Justin Timberlake, Macklemore & Ryan Lewis, Rihanna and other celebrated artists.

But those watching the three-hour long telecast at home — live on ABC — did not see everything.

No, between the red carpet, commercial breaks, camera cut-aways and an after-party, there were plenty of moments that you had to be there to see — and perhaps even believe. Fortunately, TheWrap was in the house and did not go to the bathroom once.

Here are 10 things that you would have caught at the 2013 AMAs had you been in the Nokia Theater audience:

1. The red carpet was a family affair
Rosie from “Real Housewives of New Jersey” was “representing” and co-hosting stars in the Samsung Galaxy stage. There, she had the support of fans, but also family members in the bleachers of her mini-audience. Sister Kathy Wakile and brother-in-law Rich from the Bravo show were decked out and front-and-center to support the reality show cast member-turned-red carpet-interviewer.

2. Ariana Grande is adorable
Following the young singer’s room-silencing (and filling, which is saying something for the Nokia Theater) performance, the producers of the ABC awards show cut to commercial. What viewers at home didn’t see is just how cute the award-winning newcomer (she would win New Artist of the Year) truly is. Grande celebrated her impressive effort by jumping up and down in her heels and gown, high-fiving her four back-up singers as she bounded off the stage, as excited as a kid on Christmas. Cue spontaneous “aww”‘s from the standing-and-applauding crowd.

3. Turn it up to “11”
Another top performance Sunday night was the drum-tastic show that Imagine Dragons gave the downtown Los Angeles theater. The stage itself was heavily smoke-filled for the band’s hits medley, perhaps too smokey. At one point, a guitarist in the band must have stepped on his own cord running from his electric guitar to one of many amplifiers, unplugging himself. While the cable was lost briefly in the smoke, a helpful stage-side P.A. saved the day in time for his big solo. Whew!

4. Beautiful, like diamonds in the sky
If you thought Rihanna and her mom sharing the stage for the pop star’s reception of the AMAs inaugural Icon Award was touching, then you may have shed a tear watching their embraced exit. The two women walked arm-in-arm, leaning their heads on each other as they savored a truly unforgettable family moment. No word on whether or not they were talking about how short and weird the Jay Z presentation clip was.

5. Crowd work
The Nokia Theater show-goers were treated to some of the top moments from AMA’s past (this was the 41st awards) on large screens stage right and left during the commercial breaks. (During a three-hour show, it’s easy to get antsy.) Some clips got a strong, positive reaction (Beyonce), others earned a “Oh wow, remember them?” response from the crowd (The Pointer Sisters), and still additional snippets just received automatic laughter (Justin Bieber dong the running man as LMFAO chanted, “Go Bieber! Go Bieber”).

Some random other ones from prior AMA telecasts: Bon Jovi, Shania Twain, Cher, Rick James, Janet Jackson, Rihanna, Taylor Swift and so on.

6. The other way people stayed occupied during commercials
This one pretty much depends on age and gender. If you are a pre-teen girl, you screamed and screeched and shrieked (and screeched some more) in a desperate attempt to get the guys from One Direction to turn around. If you were not a tween girl, you pretty much just covered your ears as this went on. When one of the young Brits did turn around and wave, if you were sitting near a shrieker, you would have paid top dollar for the ear plugs worn on stage by the night’s performers.

7. Veni, Vedi, Avicii
Swedish DJ Tim Bergling, better known as Avicii, won Sunday’s award for tops in Electronic Dance Music. Following the briefest acceptance speech of the evening, Avicci could not quite figure out where to exit the stage. (The answer: directly behind him, where the other people were walking.) Perhaps there was a language barrier. Or you know, that other thing that people really into EDM do that might affect cognitive skills. Just saying, it’s possible.

8. Please sir, may I have Shemar Moore?
Shemar Moore from “Criminal Minds” was in the house Sunday night to take in the American Music Awards. If you don’t believe us, just check the Instagram pages of every single person who was confirmed there, because he ended up taking a photo with just about everyone in attendance. While Moore was beyond gracious with the fans, it probably didn’t help that ABC didn’t quite give the CBS star the best seats. Weird …

9. Goo-Goo for Gaga
The standing/sitting option was mixed for most performances on the night if you sat on the wings (the center pretty much was made to stand the whole evening). But there was no question for Lady Gaga and R. Kelly’s performance — everyone was up and on their feet in anticipation alone. And Gaga gave the audience their feet-hurting’s worth. As a matter of fact, the “ARTPOP” artist was so into her own show-stopping performance that after it concluded she had to be chased off stage for loitering and congratulating her crew.

10. Miley’s Mini-Twerk
In a move that surprised no one who pays attention to media trends, Miley Cyrus used the platform to remind everyone that she can flat-out sing. And she literally used a platform to do that. Cyrus climbed a ladder to a maybe six or seven foot high riser above her band, so that it was just her and a microphone when the lights hit. Oh, and there was also a weird adorable cartoon kitten mouthing the words to “Wrecking Ball” and crying along. But after the somber song ended and the camera cut away, Cyrus turned her back to the crowd and give everyone a little booty shake, as if to say: “Baby steps.”