The “Plan 9” remake trailer wasn’t anything like anyone expected. While the radio playing Criswell’s legenday “future” speech was a throwback to the 1959 anti-classic, this week’s clip looked more like Zack Snyder than anything Ed Wood did.

2. "Plan 9.0" Still Going Strong After 50 Years
Meanwhile, the original is still packing them in at cinemas across the country, albeit with live comic commentary from the Mystery Science wags at RiffTrax. An encore performance has been scheduled for October 8. Info here.

3. Variety Likes to Kill the “Dead” 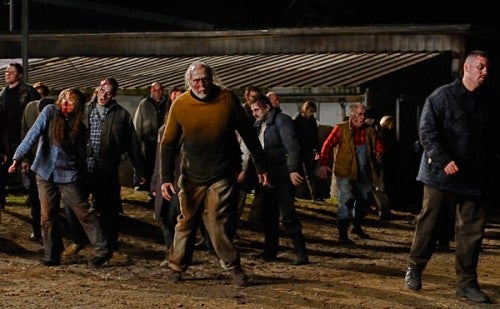 The first review for George A. Romero’s “Survival of the Dead” — premiering this weekend at Toronto — came from Variety. They didn’t like it at all. (Full disclosure: I’m friendly with Mr. Romero and did a cameo as one of his zombies, so I’m somewhat biased and hope it’s good.) I thought it’d be interesting to see what the trade paper had to say about the original, “Night of the Living Dead," now recognized as a classic, on its initial release just over 40 years ago. “Although pic's basic premise is repellent — recently dead bodies are resurrected and begin killing human beings in order to eat their flesh — it is in execution that the film distastefully excels,” the review read, before reciting a litany of gore and noting “a climax of unparalleled nausea." The review continued: “The rest of the pic is amateurism of the first order. Pittsburgh-based director George A. Romero appears incapable of contriving a single graceful set-up, and his cast is uniformly poor.”

4. Eli Roth Kisses the Snake
Last week I told you Eli Roth was doing a PETA commercial. Here are the results, and they’re more romantic than anyone might expect.

5. Josh Olson Will Not Read Your F—ing Script
In the Village Voice, screenwriter John Olson, Oscar-nominated for his adaptation of “A History of Violence”, told everyone that under no circumstances would he read their f—ing script. (Damn, I wish I could recall that DHL courier!) Olson made many reasonable points, but I have a question: Did he ever himself make such a “dick move” in the decades he spent working below-the-line in Hollywood? How would you not, working with Dolph Lundgren on 1987’s “Masters of the Universe”? 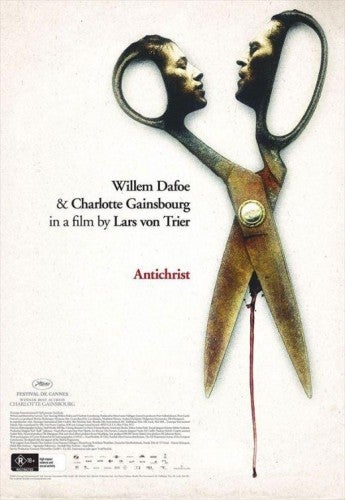 Now here’s a poster you can’t help but notice. Australia’s key-art wizard Jeremy Saunders tells me that his appropriately controversial design for Lars Von Trier’s controversial horror film has already had some of his fellow Aussies apologizing to the world on his behalf. As for how he came up with it, Saunders says: “Well, it's taking the one thing that everyone knows about ‘Antichrist’ and using that as a sell. I got called on Friday morning by Andrew Mackie at [distribution company] Transmission and he knew I was going on holiday the next day. He just said: 'We want something, you know, Polish'.” Saunders laughs. “Which is the kind of direction you dream of. The design took me about an hour and a half and then I got a bit excited and tingly about the whole thing and had to go for a walk. Then I got on a plane and went on holiday and two days later it's all over the internet.” Check out Saunders’ other designs, used and otherwise.

7. Manilow Mania? More Like Barry, Actually
I’m pretty sure that before today the names Michael Stipe, Tom Hanks and Barry Manilow have never been uttered in the same sentence. But now the REM frontman’s Single Cell company have joined forces with Tom Hanks’ Playtone to make a romantic comedy that’s based on the songs of the feathery-haired crooner. Supposedly, it will be less “Mamma Mia” (the characters won’t burst into song) and more “Love, Actually” (Manilow fans arrive in Vegas to see his show and their stories intersect). Either way, it sounds more gruesome than “Sorority Row." But let the title-guessing games begin! “Mandy”? Too specific. “Weekend In New England”? Kinda counterproductive. “Copacabana”? There’s a Copa Cabana Grill in Vegas but I think the Hilton, where Manilow has headlined since ’05, might not appreciate that. “Can’t Smile Without You”? Ah, as Colonel Landa might say, “That’s a bingo.”

8. Disney and Del Toro Double Dare Us
I’m more excited by this than by Disney swallowing Marvel. Guillermo del Toro, man behind the awesome “Pan’s Labyrinth” and “The Devil’s Backbone” and the upcoming “The Hobbit,"has teamed up with the Mouse House to create a label called Disney Double Dare You. Their remit is to “create new animated films full of chills and thrills for audiences of all ages."

9. Fight Smack in "The Orphanage"
This is a real problem, folks. Be aware. Make a difference. Join FSITO today.

10. "Pirates 4" Gets Stranger
Okay, so the next “Pirates of the Carribbean” movie has the subtitle “On Stranger Tides." The web is awash, me hearties, with speculation that Disney is adapting a 1987 novel of the same name, which is about a puppeteer bound for Jamaica who’s forced to become a pirate and is whisked away to dreamlike lands where the Fountain of Youth awaits. Just so long as they improve on “Pirates 3," which sucked harder than a CGI whirlpool. Two resonant anagrams of “On Stranger Tides” to describe how I felt about the franchise after the last effort — “Dearness rotting," “Restated snoring."