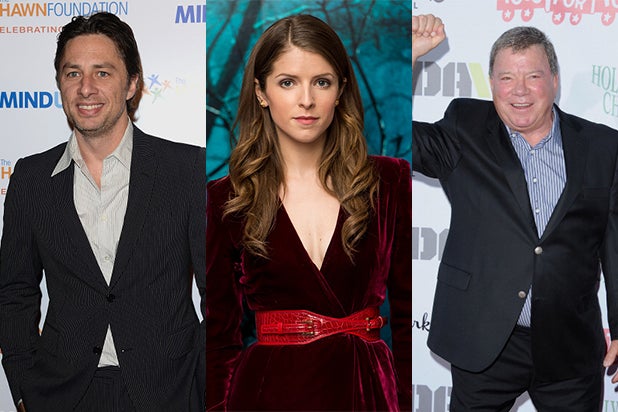 These days, it would be hard to find an actor with a Twitter handle who doesn’t live tweet his or her own TV show, guest appearance or streaming movie. It’s practically part of their contract to gather with castmates, tweet with one hand, and clink drinks with the other — selfies optional.

That’s what makes the following celebrities so interesting: they watch and tweet other people’s projects. From weekly series to TV specials, these are the Twitter power users of 2014 who couldn’t resist sharing their reviews, 140 characters at a time. Besides being fun to follow, their tweets are the digital equivalent of a what-to-watch. Even when the snark level is set to “High,” these verified handles are real-time TV tune-in alerts to the water cooler shows everyone’s going to be talking (and tweeting) about.

Look #Defiance & #Dominion fans. The easiest way to kill your show is to focus on other tags. If you don’t stick with these 2 tags you fail — William Shatner (@WilliamShatner) August 4, 2014

WILLIAM SHATNER
The onetime Captain Kirk is just as likely to be found live-tweeting CW or SyFy dramas as engaging in Twitter feuds or railing over his pet peeve: Twitter’s verified accounts. But when Shat’s on your side, he’s a one-man social media machine. He’ll vouch for friends. He’ll organize fans around the appropriate hashtag. He offers up tune-in details and even leads the charge to save shows on the bubble.

Me too! Rt @zachbraff: I want Allison Williams as a boy to take my gay virginity. #PeterPanLive

MIA FARROW
“Sharknado” may have trended on its own merits last year (Flying sharks! Chainsaws! Tara Reid!) but tweets from the “Rosemary’s Baby” star helped turn the SyFy movie into a bonafide TV event. Since then, Farrow’s just as likely to tweet about the “Sound of Music Live” and “Peter Pan Live” as she is about civil rights, global injustice or tune-in alerts for son Ronan Farrow’s MSNBC show.

RETTA
“I real time tweet my favorite shows: #YouveBeenWarned” reads Retta’s Twitter bio. And the “Parks & Recreation” star doesn’t mess around — a quick scroll through her timeline looks like a tweet-cap of your local TV listings: “Sons of Anarchy,” “The Walking Dead,” “Scandal,” “How to Get Away With Murder,” “Transparent,” etc. In case you’re wondering how Rhetta manages to watch so much TV, she ‘live tweets’ taped shows hours or days later.

Say what you will, but I’m loving that live tweeting a yearly staged-for-tv musical is becoming a national tradition. #drinkyourovaltine

JOSH GROBAN
In between concert updates, a lot of dog tweets and flirting with Twitter friends like Anna Kendrick and Michael Buble, Groban spoke for us all when he praised staged-for-TV musicals as a great American holiday tradition. Hashtag: Blessed.

JUDGE REINHOLD
The “Fast Times at Ridgemont High” star can’t seem to post enough #TBT (Throwback Thursday) snapshots. But he gets a special mention for pulling this 1982 headgear shot out of the archives and comparing himself to Christopher Walken during NBC’s live musical event, “Peter Pan Live.”

Stand By Me Under The Mistletoe #XmasAMovie @midnight

WILL WHEATON
Comedy Central owes the “Star Trek: The Next Generation” star a paycheck, benefits and a yearly bonus. When Wheaton isn’t guesting on friend Chris Hardwick’s internet-themed improv show “@Midnight,” he’s racking up points and retweets playing the show’s hashtag games like #XmasAMovie or #StonerSports. Wil gets our vote as a very punny guy.

ZACH BRAFF
Things you can’t miss if you follow Braff on Twitter: There isn’t a selfie he doesn’t like, “Scrubs” lives on and the bromance with Donald Faison will last forever. And, like so many stars, he loves a live musical TV event. In fact, his “Peter Pan Live” tweet begging Allison Williams to take his gay virginity was so good, it earned him a retweet and coffee date with Mia Farrow.

RT if you’ll be watching #PeterPanLive unironically. Favorite if you’re dead inside.

JOSHUA MALINA
The entire “Scandal” cast deserves credit for raising the live tweet bar, but Malina’s gone even further. Despite the snarky, Scott Foley-mocking persona he maintains on Twitter, there’s no masking the man’s enthusiasm for pop culture. Whether he’s tweeting about “Survivor,” “MasterChef Jr,” “The Sound of Music Live” or “Peter Pan Live,” this is one guy who really enjoys tweet-capping his TV habits.

OMG what if Carrie Underwood hate-tweets the whole thing

BILLY EICHNER
Narrowing it down to just one comedian (hello Michael Ian Black, Patton Oswalt, Rob Delaney, Jenny Johnson, etc.) who geeks out over their favorite TV show on Twitter is tricky, but when Debra Messing tweets “OMG you’re so funny,” it narrows the category. In one subtweet, Eichner manages to skewer the entire TV musical genre and pin it all on “Sound of Music” sweetheart Carrie Underwood.