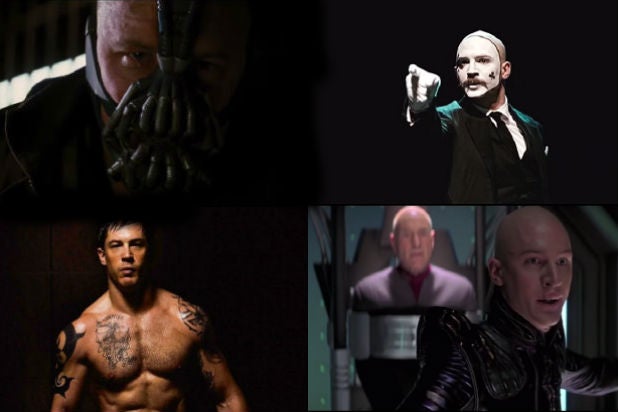 Like fellow outspoken actor Sean Penn, there is almost nothing Tom Hardy could say in a movie that would rival his amazing real life quotes, but we’re still going to give it a shot in honor of “Mad Max: Fury Road.”

There were some tough omissions from early Hardy movies such as “Layer Cake,” as well his recent turn on the British series “Peaky Blinders,” but in the end, we were limited to 10 quotes from 10 different movies, not counting our exceptionally quotable top choice.

If there’s a line we missed, let us know in the comments section below. And if you haven’t seen some of these movies, be sure to catch up on Hardy’s catalogue of classics.

1. THE DARK KNIGHT RISES – “We will destroy Gotham. And then, when it is done and Gotham is … ashes … then you have my permission to die.”

Hardy’s villainous Bane provided many tasty bon mots, even if you couldn’t always hear them through his face mask. He sure did know how to taunt Batman though.

2. INCEPTION – “You mustn’t be afraid to dream a little bigger, darling.”

Hardy played Eames in Christopher Nolan’s trippy blockbuster, and here he encourages his co-conspirators to maximize their imaginations.

3. BRONSON – “You don’t want to be trapped inside with me, sunshine. Inside, I’m someone nobody wants to fuck with. Do you understand?”

Hardy’s breakout role came in this prison drama in which he played notorious prisoner Charles Bronson. Hardy is virtually unrecognizable in the role, but you’ll know it’s him because the performance is dynamite.

4. TINKER TAILOR SOLDIER SPY – “She told me she had a secret, the mother of all secrets…”

Hardy’s title character is a man of few words. A man of action. We can’t wait to check out the eye-popping world that director George Miller has created with updated technology.

6. WARRIOR – “I think I liked you better when you were a drunk.”

Hardy plays a military veteran who comes home to fight his own brother and train under his alcoholic father, played by Nick Nolte. He delivers this cutting line of dialogue in the midst of a brutally emotional scene.

7. THE DROP – “People like this, they take something from you, and you let them, they just act like they can keep coming back and you still owe them something and they never, never change. You can never change their mind.”

Hardy’s Bob appears to be a harmless bartender on the outside, but we know better than to mess with him. Unfortunately, Matthias Schoenaerts learns the hard way…

This was one of Hardy’s earliest movie roles, and while it isn’t a particularly memorable appearance, we totally agree with him about the danger of rooftops in a war zone.

9. LAWLESS – “It is not the violence that sets a man apart — it’s the distance he is prepared to go.”

Hardy played one of three bootlegging brothers alongside Jason Clarke and Shia LaBeouf. At one point, he’s nearly decapitated, but he holds his head onto his neck and walks miles home. That’s a real man for you.

Many people forget that Hardy played the villain in this mid-90s “Star Trek” movie. I haven’t seen it, but I also imagined that Picard would be a little taller. Oh well… chalk it up to movie magic!