#OscarsSoWhite has been trending (again) since the Academy announced their nominations for this year’s Oscars without including a single person of color — and users have taken to social media to post as many memes, GIFs and photos about the issue as they can.

One user took Matthew McConaughey‘s chest beat from “The Wolf of Wall Street” and simply photoshopped an Oscar statue into the video. The famous “Danny DeVito, I love your work!” clip from “Mean Girls” was used in response to the actor speaking out on the diversity issue.

The Academy of Motion Picture Arts and Sciences announced what it referred to as “a sweeping series of substantive changes” to its rules on Jan. 22 to promote diversity in Academy membership in response to the #OscarsSoWhite outrage that has caused many actors and filmmakers to speak out and even call for a boycott of this year’s ceremony.

Also Read: Here's Every Change Hollywood Has Made Since #OscarsSoWhite

AMPAS also pledged to add minority members to its executive and board committees. Typically, the identity of members on those committees has been kept secret by the Academy.

See a collection of some of the best #OscarsSoWhite memes below.

We all remember this famous chest thump song from “The Wolf of Wall Street:”

Those who have seen Spike Lee‘s “Do the Right Thing” will  understand this one:

And in response to Danny DeVito‘s comments, obviously this is the appropriate GIF:

Danny DeVito has spoken out on #OscarsSoWhite: "We're a bunch of racists" https://t.co/VRUKxjP7Bv pic.twitter.com/UDYBHpRmOm

Whoopi Goldberg apparently appalled fans when she said, “I won once, so it can’t be that racist.”

When you see Whoopi Goldberg said Oscars aren't racist because they gave her one… #OscarsSoWhite pic.twitter.com/9avKJqVllD

They're really trying to drag us down before our month tho ???? #NotToday #OscarsSoWhite pic.twitter.com/6blyLqiIp6

Also Read: Who's Boycotting Oscars So Far - And Who's Just Mad (Photos)

Many actors and filmmakers have done the complete opposite of what is proposed in the following GIF:

REPORTER: What are your thoughts on diversity and #Oscarssowhite ? Actor: pic.twitter.com/c2RJiWtpkD

“SoPOPular” host Janet Mock tweeted out what’s possibly the best meme of them all: 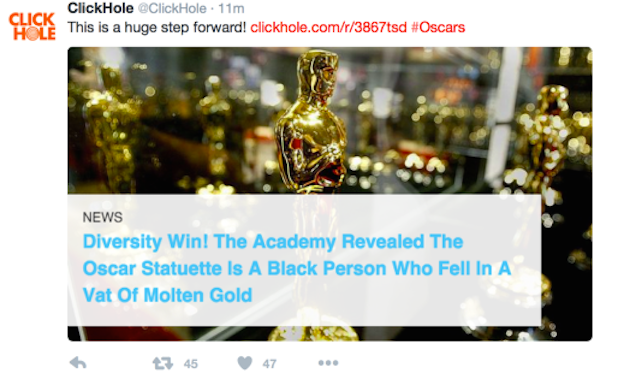 This one is just shocking:

An anomaly of an animal was used to further the #OscarsSoWhite outrage: