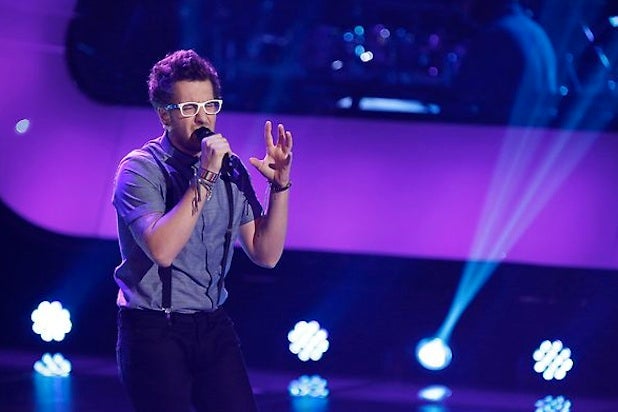 Hello kids! It’s Week 2 of NBC’s “The Voice,” and we have another four hours of blind auditions, so just sit back, relax, and let me love you.

Here are my highlights from this week:

1. Swampy is a good thing, right? Ray Boudreaux’s indie pop appearance belies his soulful delivery, and his daughter kicked off a week of some of the cutest kids I’ve ever seen on this show (somebody get that girl a pilot!). While I don’t know that his voice is necessarily “swampy,” I do think Team Blake was lucky to get him onboard.

2. Don’t funk with my heart. OMG, “The Voice,” what are you trying to do to me? You present me with the compelling Malford Milligan – an African America albino who grew up working in cotton fields and struggled all his life due to people’s reactions to his appearance – and then you take him away from me? Did I mention he’s legally blind and remains upbeat despite his troubles? Are you trying to break my heart with this sh-t? Malford – you are wonderful, and I hope to buy your autobiography one day.

3. Just give me three reasons. It was inevitable Blake would pull out an award at some point, but he one-upped previous seasons by pulling out not one, not two, but THREE awards when fighting for the fiery 15 year old powerhouse Timyra-Joi. While Christina won her, you have to give Blake points for effort.

4. So many electric feelings right now. Preston Pohl is adorable. His parents are adorable. His dad cried which made me cry, and then he sang “Electric Feeling,” and boy did he SING. His tone is undeniable (as is his charisma onstage), and this was one of my favorite auditions so far this season. I’d call this a win-win for Team Adam.

5. Best glasses since Michelle Chamuel. Will Champlin doesn’t smile much, but he wears the hell out of a pair of glasses and sings with a laid back delivery as cool as his taste in glasses. His voice is fantastic, and this was yet another win for Team Adam.

6. My new favorite grandma. Do we have a new FAVORITE GRANDMA?? Freddie Mae once played blues on the weekdays and gospel on Sundays, and now she is plucky and cute and my hero. Luckily for us, Stephanie Anne Johnson gave a great performance that lived up to Grandma’s hype. Stephanie’s voice is quirky, lovely and a little weird. Freddie Mae summed it up best when she said “The whole world is gonna hear her – oh how wonderful!” Right on, Grandma. That’s a voice that needs to be heard.

7. Pass the tissues. Sam Cerniglia has a heartbreaking backstory – two sisters with devastating health diagnoses and a family that encourages him to pursue his dreams despite that. My waterworks show started when Sam tearfully talked about his story and then intensified to waterfall status when they played a recorded message from his mother and older sister. How does Carson Daly hold it together when this stuff happens? Is the man made of stone? Thank God, Sam was good, landing on Team Blake, because I couldn’t have handled another Malford moment. “The Voice” can only toy with my emotions so many times.

8. Best unintentional innuendo. This would have to be Cee Lo with his response to the beautiful Olivia Henken – “I will put you in some different positions – professional positions.” This might clue us in to why Olivia chose Team Christina.

9. This should have been four chairs. Sometimes, I wonder if the judges are wearing earplugs or napping or making their grocery lists during some auditions. R. Anthony sang the hell out of “Hall of Fame” and barely got two chair turns when I thought he was one of the best performances of the week. It makes no sense to me, but I’m just happy he’s moving on. This was a great catch for Team Cee Lo.

10. Everyone loves a second chance. James Irwin auditioned last season, broke our collective hearts with his back-story, but didn’t make it onto a team. This season, he was back with a secret weapon (his sweet wife and toddler) who brought him the mojo he needed for a four chair turn (a first for a returning contestant). His rendition of “Losing My Religion” secured him a spot on Team Adam and gave everyone a much needed happy ending (for now).

11. Shine bright like a diamond. Ashley DuBose shined brightly this week with her version of “Diamonds,” delighting me and getting all four coaches very excited. Not only is she beautiful, but her tone is really unique and layered. I am definitely a fan, and so was Adam who managed to snag her for his pool of contestants. Is it just me, or was this Adam’s week??

Leave some of your favorite (or least favorite) moments in the comments! Also, go check out my new album “In & Out of the Dark,” which is available on iTunes NOW: https://itun.es/us/2BjbP.