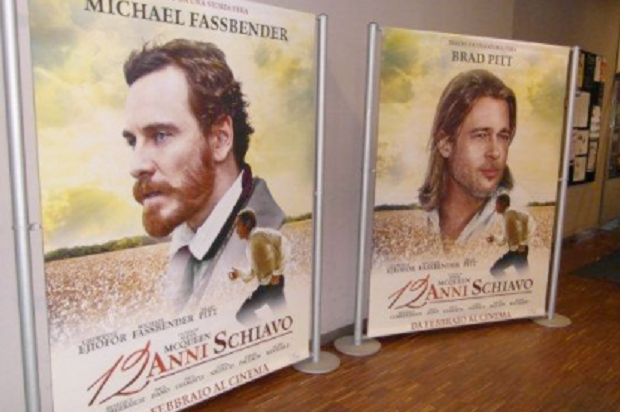 Lionsgate was scrambling Tuesday to take down posters for “12 Years a Slave” from Italian movie theaters, after complaints that they subjugated black star Chiwetel Ejiofor in favor of the better-known and white stars Brad Pitt and Michael Fassbender.

Some of the posters had Pitt front and center, others featured Fassbender; in both, star Ejiofor is pictured much smaller in the lower corner running as the main character, Solomon Northrup.

The misrepresentation of  director Steve McQueen’s brutal slavery saga, a frontrunner for the Best Picture Oscar, set off a storm in the blogosphere, after it was pointed out late Monday by Carefree Black Girl.

When Lionsgate’s Summit Entertainment, which is distributing “12 Years” in Italy, became aware of the posters, it said they “were unauthorized and were not approved by any of the producers or licensors of the film,” in a statement.

Italian distributor BIM Distribuzione wasn’t talking, but most of the offending posters had removed by late Tuesday night, according to a people familiar with the matter.

It’s not unusual for foreign exhibitors to play up the biggest name stars to sell U.S. movies, but this one drew fire because Ejiofor is very much the center of the film as a man kidnapped and sold into slavery.

Pitt, who is a producer on the film, plays a minor role as a Canadian carpenter and Fassbender is a cruel slave master.

“Summit Entertainment, acting as exclusive sales agent for the licensors, is investigating and taking immediate action to stop the distribution of any unauthorized posters and to have those posters currently in the marketplace recalled,” the studio said after reports about the posters surfaced.

The $20 million drama from Regency Enterprises and the U.K.’s FilmFour has brought in more than $37 million at the box office in North America for distributor Fox Searchlight. A re-release is planned after the Oscar nominations on Jan. 16.

“12 Years a Slave” is just beginning its foreign run. Summit has the international rights, with the exception of the U.K., where FilmFour has them.