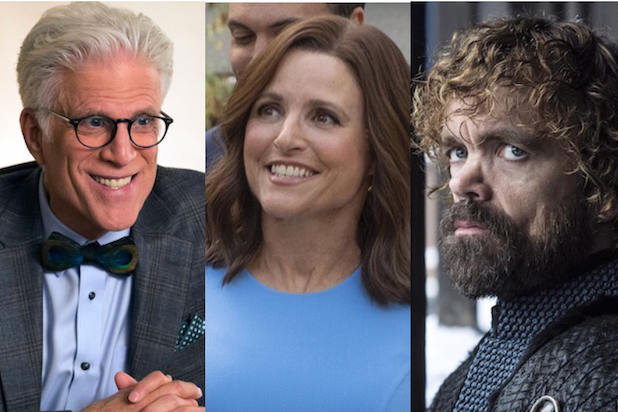 Here’s a list of some of the records that have fallen, with many of them being broken by the individuals or shows who already held those records:

“Game of Thrones” has now set the record for the most nominations in a single year for any drama or comedy series, with 32.

Its nomination in the Outstanding Drama Series category also ties “Game of Thrones” with “Mad Men” for second place all-time with eight nominations in that category. (“Law & Order” is first with 11.)

“Game of Thrones” and “Mad Men” are also now tied as the longest-running shows to have every single season nominated for Outstanding Drama Series.

“Game of Thrones” has also broken its own record to set a new record for the most total nominations ever for a scripted series, 161.

With his nomination for “The Good Place” in the Outstanding Lead Actor in a Comedy Series category, former “Cheers” star Ted Danson has broken his own record for the most nominations in that category with 13.

Julia Louis-Dreyfus’ Outstanding Lead Actress in a Comedy Series nomination for “Veep” is her 12th in that category, which breaks her own record. (She also picked up nods for “Seinfeld” and “The New Adventures of Old Christine.”)

Peter Dinklage’s Outstanding Supporting Actor in a Drama Series nomination for “Game of Thrones” is his eighth in that category, breaking his own record and setting a new record for the most nominations in the category.

“Saturday Night Live” has broken its own record and set a new record as the most-nominated program ever, with 270.

With two nominations, “SNL” producer Lorne Michaels has broken his own record and set a new record as the most nominated individual in Emmy history, with 88.

Also Read: Emmy Nominations by the Numbers: HBO Back on Top, 'When They See Us,' 'Russian Doll' Lead for Netflix

With four of the nominated shows in the Outstanding Comedy Series category sporting casts fronted by women — “Veep,” “The Marvelous Mrs. Maisel,” “Fleabag” and “Russian Doll” — it is the first time that female-centric shows have outnumbered male-centric shows in that category since 1989-1991, when three of the five nominations went to “Murphy Brown,” “Designing Women” and “The Golden Girls.” (You could also argue that a fifth of this year’s nominated shows, “The Good Place,” is fronted by a woman, Kristen Bell.)

With its three nominations, “House of Cards gets” now has 56 total nominations, breaking its own record and setting a new record for the most nominations for an online-streaming program.

Norman Lear, the producer of “Live in Front of a Studio Audience: Norman Lear’s ‘All in the Family’ and ‘The Jeffersons,'” is now the oldest Emmy nominee in history, at 96 years, 354 days. The previous record-holder was Carl Reiner, who was nominated last year at the age of 96 years, 114 days.

HBO’s 137 nominations set a new record for nominations by a network in a single year. The previous high was 126 by HBO in 2015.