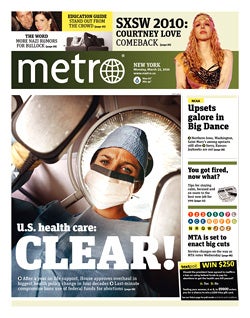 Nearly every newspaper in America devoted at least part of their front pages on Monday to Sunday night’s historic vote on health care.

But not all. Of 406 U.S. newspaper covers uploaded to Newseum.org on Monday, 15 did not mention the health care vote.

For some of them, the vote probably occurred too late for their deadlines. (Others opted to run stories acknowledging a vote was taking place.)

Here are the aforementioned 15, along with the subjects of their top front-page stories:

But just because health care made the front cover didn’t mean it was always the biggest story. Tiger Woods’ first interviews since his sex scandal split some tabloids, like the Boston Herald.

For others, local stories were played just as big. In Duluth, for instance, Obama’s health bill had to fight with the University of Minnesota-Duluth’s triple overtime victory in the NCAA Division I women’s hockey final, and Joe Mauer’s $184 million contract extension with the Minnesota Twins. In the Rio Grande Valley, it was “mutton rides.”

UPDATE: Howard Witt, senior editor at Stars and Stripes, takes issue with their inclusion on "this list of shame":

"We are a newspaper published for U.S. troops overseas, hence our deadline is 2pm EST each day. Which means the health care vote occurred fully 9 hours after our deadline. We are of course putting the story on our front page in the next available edition, namely Tuesday’s."