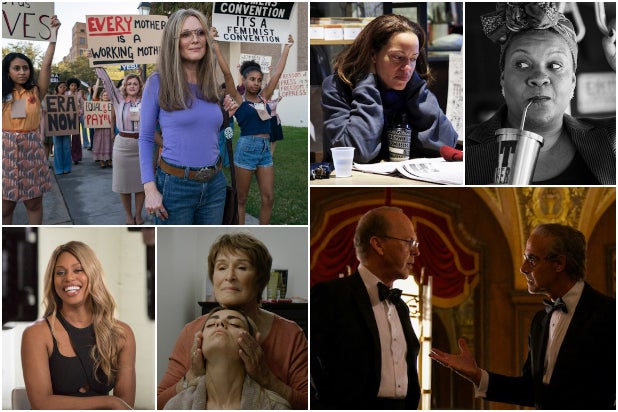 All Photos Courtesy of Sundance Institute
It's another Sundance Film Festival of slopes, snow, stars and sales. That's right, the market at the Sundance Film Festival is gearing up yet again with some buzzy titles among those just premiering at the festival and those in competition. And after last year produced some mega deals for movies like "Late Night," "The Farewell" and "Brittany Runs a Marathon" to name just a few, these are the features and documentaries TheWrap will be keeping an eye on while in Park City. 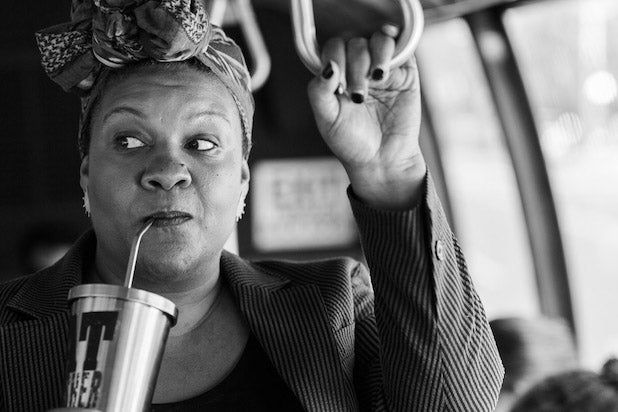 Courtesy of Sundance Institute | photo by Eric Branco
"The 40-Year-Old Version"  No, it's not the Steve Carell movie. Radha Blank wrote, directed and stars in this highly personal film about what it really looks like to be a struggling actress at age 40 when she leaves the world of community theater and records a rap demo track. The film marks Blank's directorial debut and is shot in New York entirely in black and white. "Queen & Slim" scribe Lena Waithe is a producer on the film, and "The 40-Year-Old Version" is playing in the U.S. Dramatic Competition. 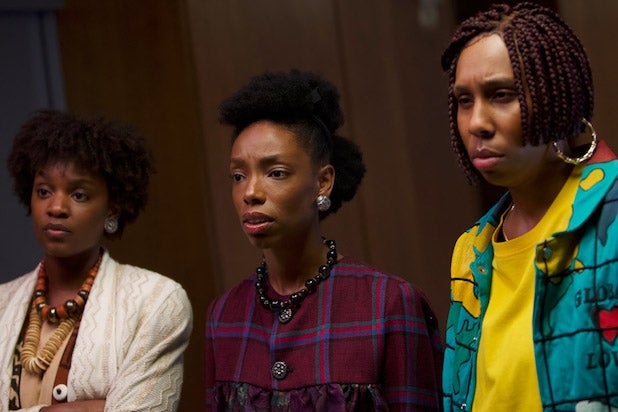 Courtesy of Sundance Institute
"Bad Hair"  Justin Simien's follow-up to his thought-provoking conversation piece "Dear White People" is set in LA in 1989 about a group of enterprising women trying to climb the ladder and be the next star of a music video TV show, all while battling in a war of words and dreadlocks. Elle Lorraine, Vanessa Williams, Jay Pharoah, Lena Waithe, Blair Underwood and Laverne Cox all star in this satirical, psychological thriller that's debuting in the midnight section of the festival. 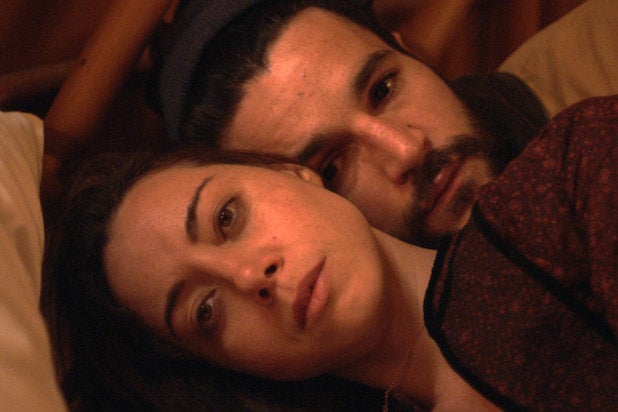 Courtesy of Sundance Institute | photo by Rob Leitzell
"Black Bear"  "Black Bear" stars Aubrey Plaza, Christopher Abbott and Sarah Gadon in a drama about a couple who welcomes an aspiring filmmaker into their remote lake house, only to be wrapped up in a game of desire, manipulation and jealousy in the filmmaker's pursuit of art. The film is directed and written by Lawrence Michael Levine and will premiere in the NEXT section of the festival. 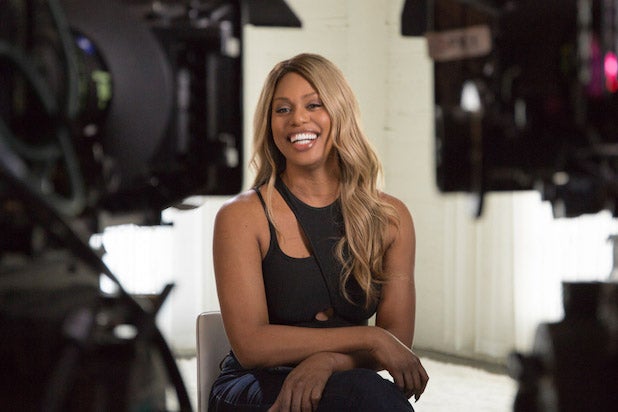 Courtesy of Sundance Institute
"Disclosure: Trans Lives on Screen"  In "Disclosure," filmmaker Sam Feder sits down with Hollywood's leaders and thinkers in the trans community like Laverne Cox, Lilly Wachowski, Yance Ford, Mj Rodriguez, Jamie Clayton and Chaz Bono. The documentary grapples with the history of trans characters in TV and movies, going way back to "Dog Days Afternoon" and "Boys Don't Cry" up through FX's "Pose." 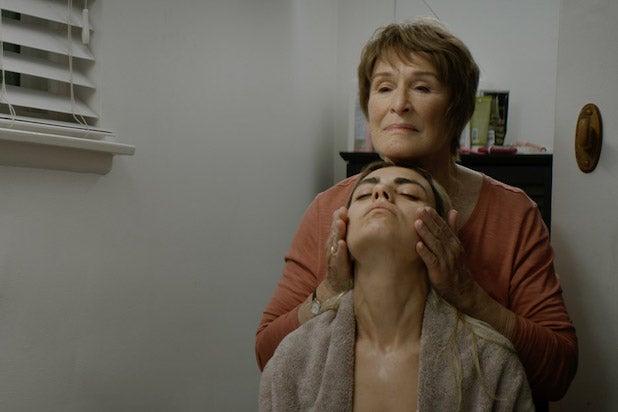 Courtesy of Sundance Institute | photo by Igor Jadue Lillo
"Four Good Days"  Glenn Close reunites with her director on "Albert Nobbs," Rodrigo Garcia, for this drama in which Close plays a mother who gets a surprise visit from her estranged, drug addict daughter (Mila Kunis). Close's character is resistant to give her daughter another chance after years of failed rehab and lying, but something about this time feels different. 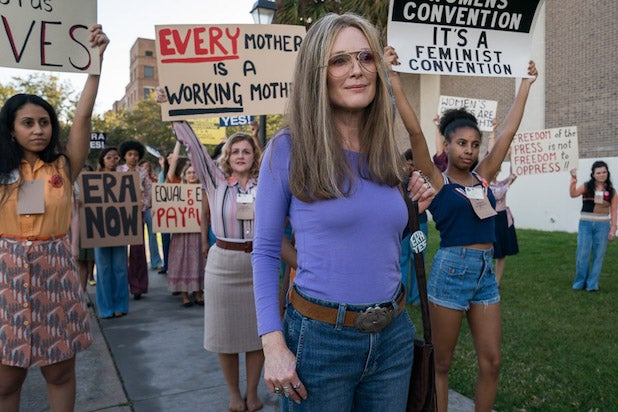 Courtesy of Sundance Institute
"The Glorias"  Julianne Moore stars in Julie Taymor's biopic "The Glorias" about the journalist and feminist icon Gloria Steinem. But she's just one of five women playing Steinem at different stages of her journey in Taymor's unconventional approach to adapting Steinem's memoir "Life on the Road." Alicia Vikander, Janelle Monáe, Timothy Hutton, Lulu Wilson, Lorraine Toussaint and Bette Midler all star in the film. 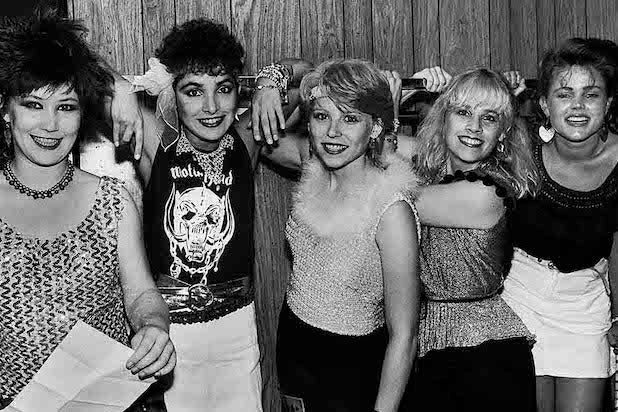 Courtesy of Sundance Institute | photo by Paul Natkin
"The Go-Go's"  This documentary's got the beat as it goes behind the scenes of one of the defining pop punk girl groups of the 1980s, The Go-Gos. The film from director Alison Ellwood reunites founding band members Belinda Carlisle and Jane Wiedlin during their early days in the Los Angeles punk rock scene up through their hit-making, MTV success and turn to fame, drugs and alcohol. 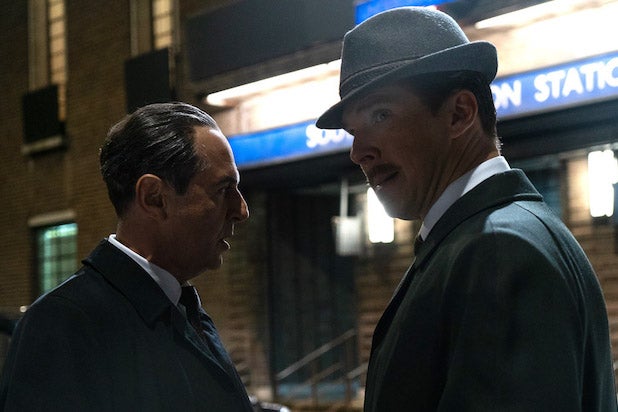 Courtesy of Sundance Institute
"Ironbark"  Benedict Cumberbatch stars in this drama set during the Cold War-era and Cuban Missile Crisis about a mild-mannered businessman called upon by the British government to help uncover a Soviet mole. Jessie Buckley, Rachel Brosnahan and Angus Wright co-star. This is just the second feature film from Dominic Cooke after his 2017 film "On Chesil Beach." 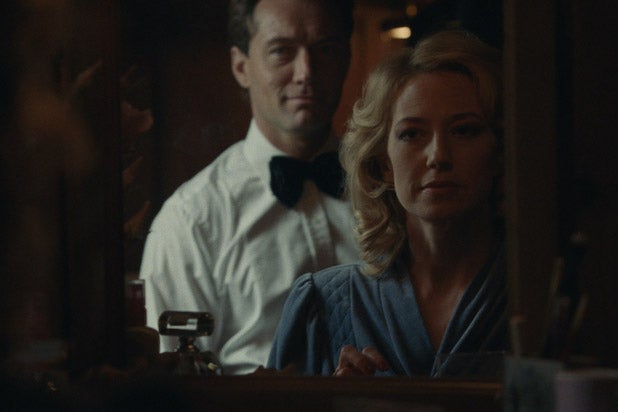 Courtesy of Sundance Institute
"The Nest"  In what is incredibly only Sean Durkin's second feature film since he won the directing prize from Sundance for "Martha Marcy May Marlene" in 2011, "The Nest" stars Jude Law and Carrie Coon as two ex-pats who leave suburban America for London in the 1980s. The two-handed character drama shows how their relationship slowly simmers and boils over as they try to manage their new, lavish lifestyle in England. 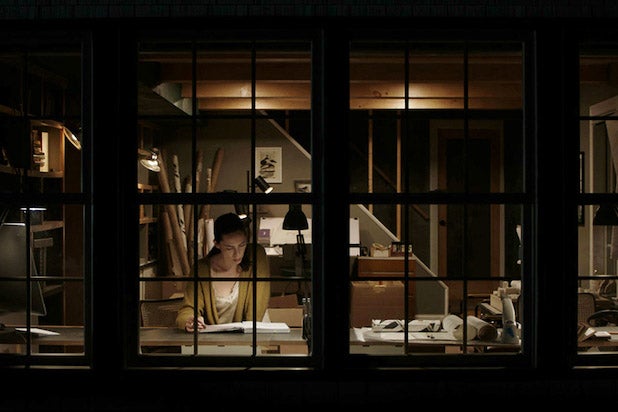 Courtesy of Sundance Institute | photo by Elisha Christian
"The Night House"  Playing in the midnight section of the festival, this horror film from director David Bruckner stars Rebecca Hall as a woman living alone in a lakeside home following the recent death of her husband. The film is an updated take on a traditional ghost story as Hall experiences dreams that drive her to find answers about her husband's past. Sarah Goldberg and Stacy Martin co-star. 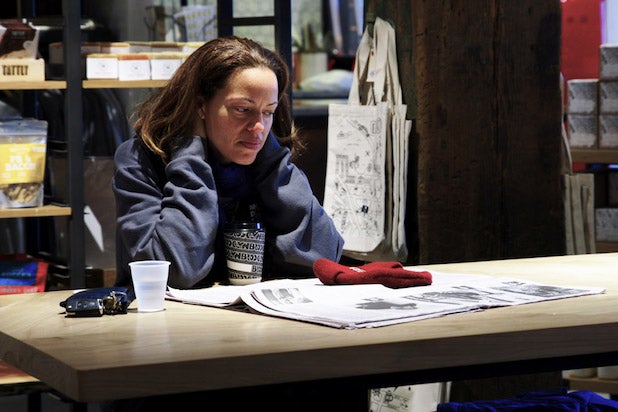 Courtesy of Sundance Institute | photo by Martyna Starosta
"On the Record"  The latest documentary from the directors of "The Hunting Ground" and "The Invisible War" is back on the market after Oprah Winfrey removed herself as an executive producer from the project and pulled the film from debuting on Apple TV+. Winfrey specifically felt the need to step aside from the movie because directors Kirby Dick and Amy Ziering wanted to show the film at Sundance before Winfrey felt it was complete. "On the Record" follows music executive Drew Dixon in the early days of #MeToo as she grapples with the decision to come forward about her her accusations of rape against Def-Jam Records co-founder Russell Simmons. 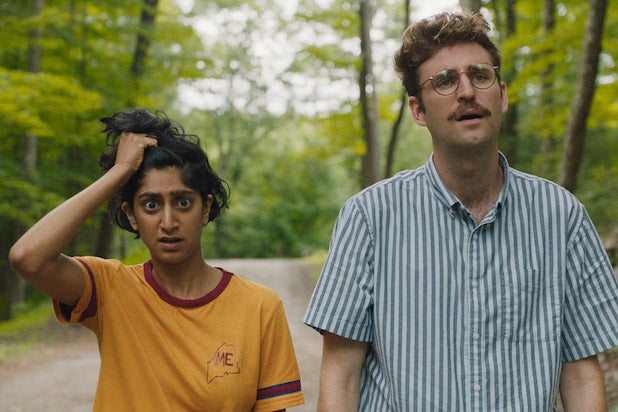 Courtesy of Sundance Institute | photo by Matt Clegg
"Save Yourselves!"  "Save Yourselves" is a zany sci-fi comedy about a Brooklyn couple that retreats to a remote cabin in the woods in order to unplug, only to miss the news of an alien invasion that's destroyed much of civilization. The film from directors Eleanor Wilson and Alex Huston Fischer satirizes millennial culture and modern love. John Reynolds and Sunita Mani star in the comedy that's premiering in the U.S. Dramatic Competition. 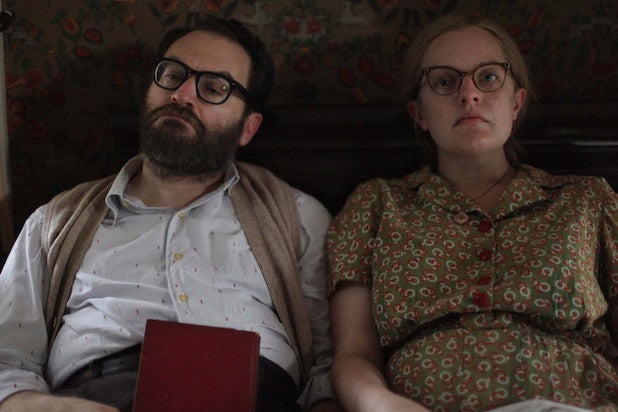 Courtesy of Sundance Institute | photo by Thatcher Keats
"Shirley"  "Shirley" stars Elisabeth Moss as the famous gothic horror author of stories such as "The Lottery" and "The Haunting of Hill House," Shirley Jackson. It's an unconventional biopic about how Jackson discovers the inspiration for her next novel through the eccentric behavior of a young couple she and her husband take into their home. Michael Stuhlbarg, Logan Lerman and Odessa Young co-star in the film from "Madeline's Madeline" director Josephine Decker. The film is playing in the U.S. Dramatic Competition.

Courtesy of Sundance Institute
"Sylvie's Love"  Romantic, elegant and with a jazzy soundtrack, "Sylvie's Love" is a lush love story set in 1957 New York and spread out over years. Tessa Thompson is said to give a powerful performance in the film from writer and director Eugene Ashe, who melds music into his romance for a rich period piece. "Sylvie's Love" is playing in competition in the U.S. Dramatic section. 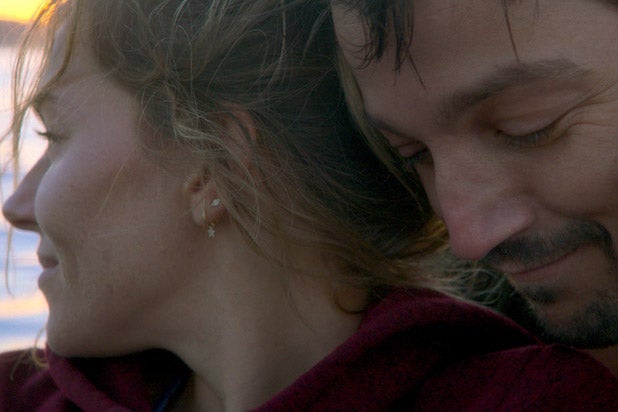 Courtesy of Sundance Institute | photo by Carolina Costa
"Wander Darkly"  Part mystery, part family drama and featuring what's described by Sundance as "demanding tonal shifts," "Wander Darkly" stars Sienna Miller trying to reckon with the future of her relationship with her husband (Diego Luna) and her infant child. At the same time, she's forced to solve the mystery of a recent traumatic accident. Tara Miele directs the film that's playing in competition in the U.S. Dramatic section. 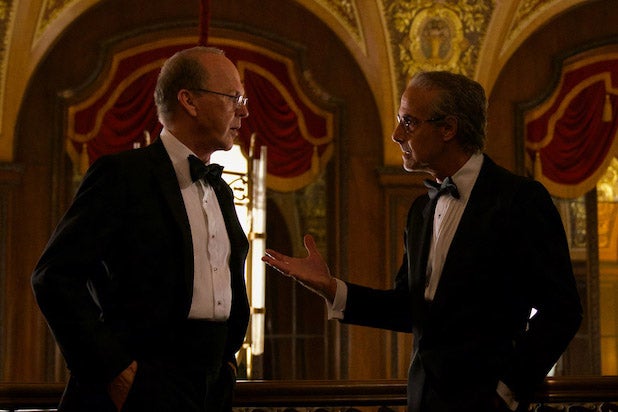 Courtesy of Sundance Institute
"Worth"  "Worth" gives a new perspective of New York post-9/11 by following Michael Keaton as an attorney appointed to lead the 9/11 Victim Compensation Fund. But Keaton's character has a change of heart when he comes face to face with a community leader played by Stanley Tucci who lost his wife in the World Trade Center. "Worth" is director Sara Colangelo's third film, all of which have premiered at Sundance, including her previous film "The Kindergarten Teacher," which won top directing honors at the festival in 2018.
x
Looks like you're enjoying reading