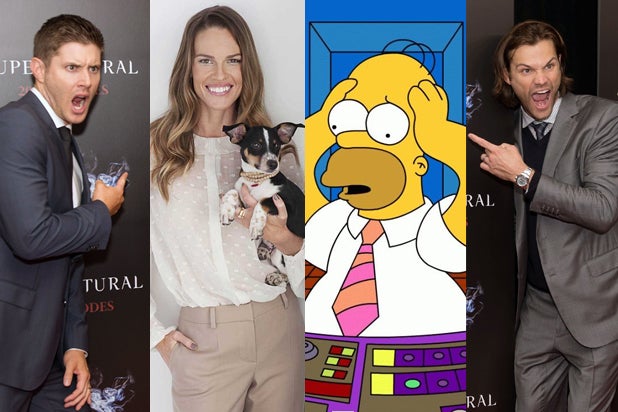 November sweeps has returned, which means broadcast networks will do practically anything in the hopes of attracting viewers and securing the highest advertising rates possible.

Neilsen’s current measuring period runs through Nov. 27 (Thanksgiving), so the next three weeks should be filled with more stunts, crossovers,  and cliffhangers than the rest of the season combined.

From Hilary Swank‘s animal-centered Fox special “The Great American Dog-a-Thon” to the CW’s 200th “Supernatural” episode, which is said to feature singing, there is bound to be a little something for everyone.

TheWrap scanned ABC, CBS, Fox, NBC and The CW’s offerings and assembled the following list of the good, the deliciously bad, and the “let’s just throw this on the wall and see if it sticks” of November sweeps episodes:

ABC
“Once Upon a Time” two-parter
“Smash the Mirror Part 1” / “Smash the Mirror Part 2” – In Arendelle when the Snow Queen (guest star Elizabeth Mitchell) tries to pit Elsa (Georgina Haig) and Anna (Elizabeth Lail) against each other and it proves more difficult than she anticipates, she takes drastic measures. Meanwhile, in Storybrooke Emma’s (Jennifer Morrison) powers are out of control and her fear of hurting loved ones pushes her away from everyone she cares about. In her confusion Emma turns to Gold (Robert Carlyle) for help getting her powers under control, in this special two hour showing.
“Once Upon a Time’s” two-hour special airs Sunday, Nov. 16 at 8 p.m. on ABC.

“Grey’s Anatomy’s” winter finale and a very special Michelle Obama-designed episode
“Risk” – Maggie (Kelly McCreary) and Meredith (Ellen Pompeo) disagree with Derek (Patrick Dempsey) about the best way to approach a patient’s case, which leads to a bigger argument between the couple. Meanwhile Callie (Sara Ramirez) feels responsible when one of her veterans is pushed too far and one doctor’s routine procedure results in a devastating diagnosis on the winter finale of “Grey’s Anatomy.”

“Scandal’s” winter finale
“Where the Sun Don’t Shine” – Command is always two steps ahead and everyone in Olivia’s (Kerry Washington) life is in danger. Meanwhile, Cyrus (Jeff Perry) is forced to face the consequences of his behavior, and Huck (Guillermo Diaz) and Quinn (Katie Lowes) finally figure out just what Elizabeth North has been planning, but they might be too late to stop it.
“Scandal’s” fall finale airs Thursday, Nov. 20 at 9 p.m. ET on ABC.

The CW
“The Flash”
Kelly Frye (“Anger Management”) guest stars as Plastique and Clancy Brown (“Sleepy Hollow,” “The Shawshank Redemption”) as General Eiling on an episode of The CW’s smash freshman hit titled “Plastique.”
“The Flash” episode airs Tuesday, Nov. 11 at 8 p.m. on the CW.

NBC
“The Biggest Loser: Glory Days” gets a visit from NFL superstars
It’s a special week for the “Biggest Loser” contestants when three NFL Super Bowl champs – Donald Driver and NFL Network analysts Michael Irvin and Willie McGinest – arrive to put them through a vigorous NFL-style workout. The visit is even more special for the two former NFL players who are contestants this season, Scott Mitchell and Super Bowl champ Damien Woody, who was a teammate of McGinest’s when they played together for the New England Patriots.
The special episode of “The Biggest Loser” airs Thursday, Nov. 6 at 8 p.m. ET on NBC.

“Chicago Fire” / “Law & Order: SVU” / “Chicago PD’s” crossover
First, a routine house fire reveals evidence that demands the attention of the Chicago PD. Next, a child pornography ring sends the Chicago PD to New York City, where they team up with Sgt. Benson (Mariska Hargitay) and the Manhattan SVU. Then, the SVU travels back to Chicago to help take down a pedophilia ring at its source.
“Chicago Fire” / “Law & Order: SVU” / “Chicago PD’s” crossover begins Tuesday, Nov. 11 at 10 p.m. and runs through Wednesday, Nov. 12 on NBC.