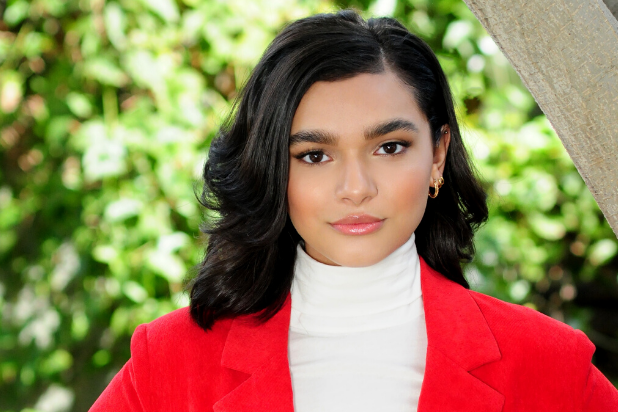 At 17, Paulina Chávez is eloquent and wise beyond her years. The star of new Netflix sitcom “The Expanding Universe of Ashley Garcia” has been tasked with playing a teenage genius who becomes the youngest person to ever earn a Ph.D and lands a dream STEM job at NASA. (As a 26-year-old myself who can barely do long division I can’t help but wonder, where did I go wrong?)

The show, co-created by Mario Lopez with several episodes directed by Eva Longoria, aims to defy stereotypes. And in a recent interview, Chévez proved to be passionate about using the show as a platform to highlight positive roles and opportunities for young women and Latinas both on screen and in STEM.

What about this show called to you that made you want to audition?

When I received the audition for “Ashley Garcia,” I was immediately captivated by the character. To have an opportunity to audition to portray a genius Latina was exciting and I related to her in the fact that we both focused on our career early on and as Latinas have over protecting/loving moms.

Who were your Latinx role models growing up?
There are so many Latino role models. I remember watching telenovelas with my grandma. My first role models were all the telenovela actors. I remember watching Barbara Mori, Jaime Camil, Ana Brenda Contreras, Pablo Montero and so many other actors. The one I will never forget is watching the novela “Rebelde” — I loved the entire cast. My grandma always told me that when I was 3 or 4 years old, I was staring at the TV and I said, “Yo me voy a ver allí.” (“I’m going to see myself there.”)

Do you think Ashley Garcia will promote other Latina/Hispanic girls to go into STEM?
Ashley represents a young Latina who is a genius, I believe it will provide young girls and young Latinos with a vision of the many options of what is possible and by all means show the young audience the careers available in STEM.

Do you see any of Ashley Garcia in yourself?
I relate to Ashley in several ways; I believe we are both passionate and dedicated to work towards our goals. We are both Latinas who have been focusing on training to pursue our dreams. In order to be able to follow my dreams I was homeschooled and did not experience the middle school and high school years. Ashley moved across the country to work as a robotics engineer at JPL in Pasadena. I also moved from Texas to Los Angeles to work on the Netflix series and follow my dreams.

Is your family anything like the family we see on the show?
I believe they are similar. My family is very supportive and we have adjusted to help in pursuing each of our family member’s goals. As a family, we made some moves/changes to support each other’s careers and opportunities that have presented themselves. I have three sisters, so my mom is overprotective of all of us. She always looks out for the best for each of us.

How does this production differ from your other roles?
This show is a multicam and this was my first experience in that type of production. We shot in front of a live studio audience. It brought me back to my theater days where I got to perform in front of an audience. Every week we had a different audience and it was a great way to connect with them.

What do you think this show does for the Latinx community?
I believe this show offers an opportunity for the Latinx community to see themselves in positive roles on TV. I have the opportunity to be part of the movement of showcasing Latinos in Hollywood with the role of Ashley Garcia. I feel very fortunate to be able to represent Latinos and inspire them to follow their dreams.

View In Gallery
BIO Emily Vogel
WrapWomen is a community of ambitious, engaged and connected female professionals, dedicated to leading full, fulfilled and fun lives. We put our thoughts in this blog. You can add yours too.