George Orwell’s “1984” returned to the best-seller lists earlier this year on the . (And no, this production’s Big Brother does not wear a blond wig.)

Icke and MacMillan, who also direct, take a somewhat unorthodox, postmodern approach to Orwell’s story, framing it around a discussion of the authenticity of the text itself. This seems to be lifted from the novel’s appendix about Newspeak, the language of the totalitarian state of Oceania. Is our hero Winston’s account of Oceania’s duplicitous origins and the rebel movement to upend it real? Or the product of a deranged mind?

To be honest, this meta approach makes the production a bit of a slog at first, weighed down by the confusion over the set-up and some overly repetitive scenes. We are meant to both parse the rules and limits of this not-so-brave new world order and to question the reliability of Winston, a lowly clerk at the Ministry of Truth played by the fine British actor Tom Sturridge with surprising expressiveness despite the fact that he’s supposed to pass easily as just another cog in the Machinery of state. 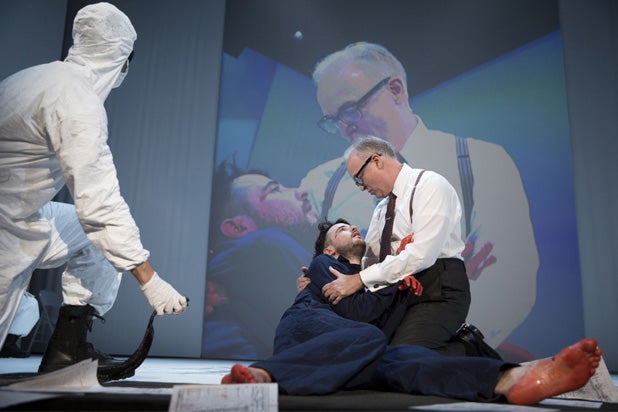 Colleagues may disappear at any moment, social interactions play out with a scripted formality because Love is forbidden and the only expressiveness seems to be the occasional Two Minutes Hate — a group catharsis to jeer at reviled “thoughtcriminals” who merely imagine ill will toward the state.

Even in the early going, the stagecraft impresses. We meet Winston as he is composing an illicit diary — his written words projected by tiny cameras onto giant screens hovering above the stage. And jarring sounds and strobe lighting signals break in scenes — or perhaps in Winston’s rational consciousness.

Before long, Winston begins to push the boundaries of his questioning about his society — even embarking on an affair with a fellow rebel, the forthright but cautious Julia (Olivia Wilde, in her Broadway debut, her relative inexpressiveness a virtue here). They rendezvous in secret — even from the audience — in an upstage space out of view but projected onto those onstage screens because we know what they do not: that Big Brother is always watching.

The production really begins to kick into gear with the arrival of the great Reed Birney (a Tony winner for last year’s “The Humans”) as O’Brien, a party apparatchik whom Winston at first believes to be sympathetic to the rebel movement. Birney delivers a riveting performance of extreme unctuousness, maintaining a veneer of calm rationality that only heightens his sense of menace.

The gripping final third of this “1984” exploits all the modern possibilities in stagecraft. Full credit to the work of designers Tom Gibbons (sound), Natasha Chivers (lighting), Tim Reid (video projections) and Chloe Lamford (sets and costumes) — together they create a memorably squirm-inducing climax.

Even for audiences inclined to feel jaded about revisiting a story from a long-ago school reading list, this “1984” manages to pump new, discomforting life into the mother of all dystopias. Icke and MacMillan also hit on some home truths that feel all too pertinent at a time when so many are called to “resist” authority. “The people will not revolt,” O’Brien notes. “They will not look up from their screens long enough to notice what’s really happening.”

On Broadway these days, we’re lucky if they’ll put down their screens long enough to enjoy the show without Instagramming it.