Last year, they kept it a secret.  This year, they’re letting us know.

Names of the first presenters for the 82nd Academy Awards were announced on Thursday by the Academy, and in keeping with tradition they started with last year’s acting winners: Best Actor winner Sean Penn ("Milk"), Best Actress Kate Winslet ("The Reader") and Best Supporting Actress Penelope Cruz ("Vicky Cristina Barcelona"). 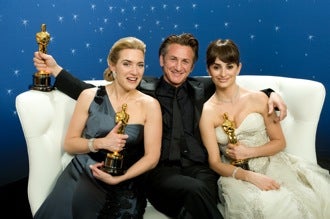 Prior to the 81st Oscar show last February, producers Bill Condon and Lawrence Mark didn’t release the names of any of the presenters, feeling that it’d increase viewer interest if none of the show’s participants were known ahead of time. In the acting categories, the presentation was made not solely by the previous year’s winner, but by groups of five past winners, each of whom extolled the virtues of one of the nominees.

This year’s producers, Bill Mechanic and Adam Shankman, originally said they were not going to bring back that format, although lately there’s been talk that more than one presenter may be used in the acting categories.

Beverly Hills, CA — All three living performers who won Oscars® in the acting categories last year will return to present at the 82nd Academy Awards®, announced telecast producers Adam Shankman and Bill Mechanic. Penélope Cruz will join fellow winners Kate Winslet and Sean Penn as presenters on the March 7 Oscar telecast. (Heath Ledger won the Supporting Actor Oscar posthumously for his performance as the Joker in “The Dark Knight.”)

Last year, at the 81st Academy Awards, Cruz took home the Supporting Actress Oscar for her role in “Vicky Cristina Barcelona.” She was previously nominated for her leading role in “Volver,” and is nominated this year for her supporting performance in “Nine.”

Penn has been nominated five times for Actor in a Leading Role and twice took home an Oscar: in 2003 for “Mystic River” and last year for his performance as charismatic politician Harvey Milk in “Milk.” His other nominations came for “Dead Man Walking” (1995), “Sweet and Lowdown” (1999) and “I Am Sam” (2001).

The Academy of Motion Picture Arts and Sciences is the world’s preeminent movie-related organization, with a membership of more than 6,000 of the most accomplished men and women working in cinema. In addition to the annual Academy Awards – in which the members vote to select the nominees and winners – the Academy presents a diverse year-round slate of public programs, exhibitions and events; provides financial support to a wide range of other movie-related organizations and endeavors; acts as a neutral advocate in the advancement of motion picture technology; and, through its Margaret Herrick Library and Academy Film Archive, collects, preserves, restores and provides access to movies and items related to their history. Through these and other activities the Academy serves students, historians, the entertainment industry and people everywhere who love movies.