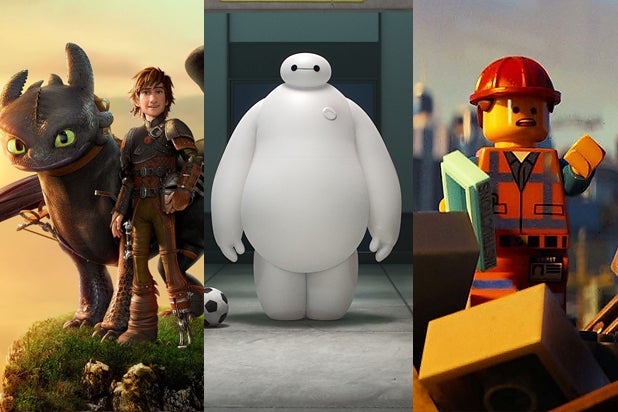 Twenty films have been submitted for the Best Animated Feature category at the 2014 Academy Awards, which should lead the way to a full slate of five nominees for the fourth consecutive year.

The number of nominations in the category is tied to the number of eligible films, with a field of at least 16 required for five nominees. In addition, films must receive an average grade of 7.5 on a scale of 6 to 10 to be eligible for nomination.

The category was created for the 2001 Oscars — and for the first 10 years of its existence, it only had five nominees twice, in 2002 and 2009. The eight other years, it had only three nominees.

The 20 submissions include Disney’s “Big Hero 6,” DreamWorks Animation’s “How to Train Your Dragon 2,” Warner Bros.’ “The Lego Movie,” Laika’s “The Boxtrolls” and Fox’s “The Book of Life.”

Also included are two well-received foreign films from the small GKIDS distributor, which has had good luck at the Oscars: the Irish film “Song of the Sea” and the Japanese film “The Tale of the Princess Kaguya.”

Pixar, which has dominated the category with seven wins in 13 years, does not have a film in the running.

Some of the submitted films must still complete their qualifying runs in Los Angeles, while all must meet other eligibility requirements. The Short Films and Feature Animation Branch occasionally disqualifies films, but the chances are almost nonexistent that they would knock out five entries to drop the category to a potential four nominees.

“Big Hero 6”
“The Book of Life”
“The Boxtrolls”
“Cheatin'”
“Giovanni’s Island”
“Henry & Me”
“The Hero of Color City”
“How to Train Your Dragon 2”
“Jack and the Cuckoo-Clock Heart”
“Legends of Oz: Dorothy’s Return”
“The Lego Movie”
“Minuscule – Valley of the Lost Ants”
“Mr. Peabody & Sherman”
“Penguins of Madagascar”
“The Pirate Fairy”
“Planes: Fire & Rescue”
“Rio 2”
“Rocks in My Pockets”
“Song of the Sea”
“The Tale of the Princess Kaguya”