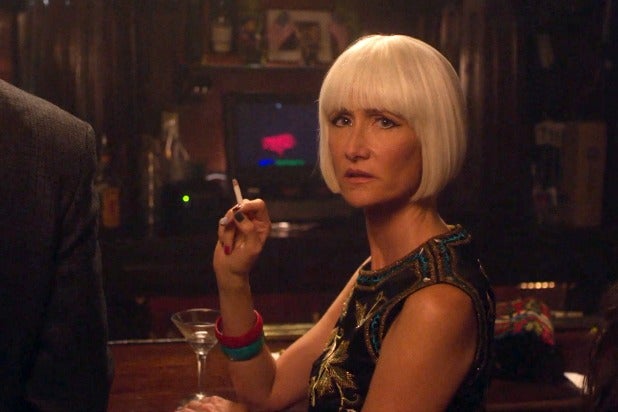 Laura Dern’s career can be summed up just looking at her eyes, whether they’re wide and clean, bulging out of her head, or covered in harsh eyeliner.

We most recently had a good look at them during the “Twin Peaks: The Return” finale, with a nice closeup of her character Diane as she (spoiler) finally has consensual sex with Agent Dale Cooper. There is a bit of focus on her backside, Cooper’s hands on her breasts, and her hands on his face, but most of the scene is told through her eyes. She wavers from looking lost in thought to being on the verge of tears. And in the morning, she is gone, but her essence remains.

But that’s not the only time we’ve seen them. In fact, it wouldn’t be a stretch to call 2017 the year of Laura Dern.

She’s had high career peaks before of course. 1993 for instance, when she starred in “Jurassic Park,” one of the biggest blockbusters of all time. But Dern has been all over the place this year — and her Emmy-nominated turn in the HBO miniseries “Big Little Lies,” and revealing herself as the elusive Diane in “Twin Peaks” are just the beginning.

She appeared in a memorable guest role in “Unbreakable Kimmy Schmidt’s” third season, voiced one of the leads in the Bill Burr-animated comedy “F is for Family,” will appear in Alexander Payne’s upcoming drama “Downsizing,” and is set to make her first appearance in the “Star Wars” universe with “The Last Jedi.”

And that’s not even including the upcoming “JT Leroy” with Kristen Stewart, “Wilson” with Woody Harrelson and a guest role on “Last Man on Earth.”

It truly is a Dernaissance.

It’s appropriate that her big year is centered around collaborations with David Lynch, who helped launch her career more than 30 years go when she played Sandy in “Blue Velvet” opposite Kyle MacLachlan. She continued that collaboration with Lynch, moving directly from Sandy to Lula in 1990’s “Wild at Heart,” where she stars alongside Nicolas Cage, a role she said this was a turning point for her career.

“For me, she was the first opportunity I’d had to play not only a very sexual person, but also someone who also was, in her own way, incredibly comfortable with herself.” she told the New York Times. “She has no fear of anyone else’s judgment. It’s just wonderful to be inside someone like that.”

Three years after that she starred in “Jurassic Park,” which remains one of her defining roles. For a Hollywood action blockbuster in 1993, Dern’s Dr. Ellie Sattler is surprisingly progressive, separated from other female leads of the era by not only digging her arms into a pile of dinosaur dung, but for a lowkey line about women inheriting the Earth. She’s confident, intent, and Dern is able to sell this when she glances at a dinosaur for the first time. It’s wonder but also speculation.

Dern’s career waned somewhat by this point, though she still had highs. In 1997 she guest-starred on arguably the most important sitcom episode of the decade, the episode of “Ellen” when Ellen DeGeneres’ title character came out of the closet. Dern suffered for helping advance the boundaries of broadcast television significantly: she would later reveal that she didn’t work for around a year because people thought she was also gay.

She had no regrets though. “Watching you have this catharsis or ritual and the audience support and a sort of holding, literal holding, I remember we were kind of holding each other up through this very emotional moment,” Dern told DeGeneres. “It was so profound and I feel so blessed that I got to be there and witness that.”

Her career was far from dead at this point, but she was relegated to less prominent roles, minus a return to Ellie in “Jurassic Park III.” Sure there was the Oscar-nominated “I Am Sam,” a number of guest roles on shows like “The West Wing” and a number of indie flicks. Then of course she returned to Lynch with “Inland Empire,” where she starred as Nikki Grace and Susan Blue (because Lynch loves twins more than he loves most things).

Playing the dual role allowed Dern a lot of freedom, as she said in a later Collider interview. It was timely as well that Dern starred as an actress poised to make a comeback. More than anything, most people remember Dern in a scene where her face becomes clownishly disfigured and stretched. In a movie that’s specifically about Hollywood’s affect on people — like many of Lynch’s later works — it packs a powerful punch as her life continues to become distorted. However, like a lot of her most memorable roles, it plays up her physicality, her features, and specifically, her eyes.

Lynch even campaigned to get Dern her first Oscar nomination with the help of a live cow and a lot of cheese, but ultimately it didn’t pan out. However, she did end up making more of a Hollywood comeback with roles in movies like “Little Fockers,” “The Master,” and as the star of the HBO show “Enlightened,” about a woman rebuilding her life and ethical center after a breakdown.

A look at the poster for that show tells you everything you need to know about Dern’s talents; focused on her face, her ambivalent expression is accentuated by smeared makeup. It’s striking and funny, but it’s also her trademark emotional rawness.

But look at 2017. Not only was Dern everywhere, but she was as emotionally raw as ever. She’s a standout in “Big Little Lies,” a miniseries filled with intense standouts like Nicole Kidman and Reese Witherspoon. Her character, Renata, is the most conventionally suburban of the group of women at the show’s core and also the most angry, especially when she screams “thank you” at the top of her lungs. But she’s able to fuse this Stepford stereotype with an authenticity that makes her sympathetic by the end of the show’s run. Then there’s Diane in “Twin Peaks,” who lives on a binary scale between pensive and quietly angry. And in the “Unbreakable Kimmy Schmidt,” she’s a normal woman thrown into an insane relationship that despite all logic, feels right for her.

At their most basic, her characters are “crazy” but they’re also plagued with sadness. So while her actions might be over the top, they still feel familiar and likable. This is true even for Renata, portrayed as a villain at first, but later shown to be motivated by an intense desire to protect her daughter. Dern’s excels when she’s playing these raw characters and a lot of her performance sits a lot in the eyes, so it’s no wonder that in that “Twin Peaks” sex scene, the focus is there, harsh eyeliner and all.

Maybe Dern just got lucky with a glut of roles that highlight her strongest assets and allow her to run free. Maybe there are just better roles now for actors like Dern, who have that extra quirk and sometimes makes questionable choices but nevertheless take risks and commit over 100 percent to anything. But 20 years after “Ellen” and people refusing to work with her, Dern is finally back in full force and we’re glad to be here for it.