The weather outside may have been frightful, but that didn’t stop the 2018 Bridgestone NHL Winter Classic from attracting a sellout crowd, as the New York Rangers and Buffalo Sabres took to the ice at Citi Field in Queens, New York, on Monday.

The temperature at puck drop was 20 degrees — but sunny at least! — as thousands of bundled up fans (41, 841 to be exact) braved the record cold to enjoy the 10th annual New Year’s Day outdoor hockey game.

Just like with Super Bowl LI, the 2018 Winter Classic came down to a thrilling overtime, with the Rangers winning 3-2 thanks to an OT goal from JT Miller. With the win, the Rangers are now 4-0 outdoors, and the Sabres drop to 0-2 in Winter Classic games. Monday also marked the fourth time the Classic went into overtime at Citi Field.

While the Winter Classic aired live on NBC from 1 p.m. ET, there was plenty of action that you couldn’t see on TV. Fortunately, TheWrap was there braving the elements to bring you details from on the (frozen) ground. 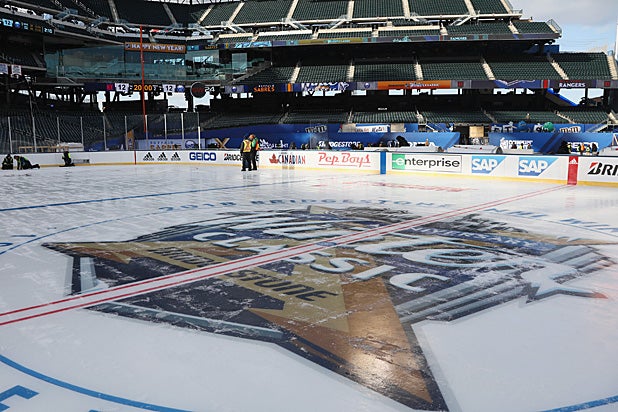 Build-out crew
Long before the puck was dropped, build-out crews were hard at work transforming Citi Field — which has been home to the New York Mets since 2009 — into a professional hockey rink. It took 3,000 gallons of coolant, 243 ice pans and a 300-ton capacity refrigeration trailer to freeze the rink, along with 350 miles of paint to make the ice white. 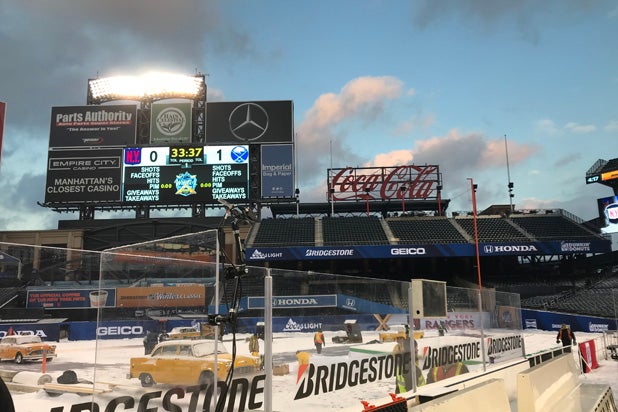 New York State of Mind
With just 372 miles separating Buffalo and New York City, the game had a very local feel. Classic yellow NYC taxi cabs decorated the Mets outfield, while interstate signs were painted on the field directing fans on the I-87 or I-90. For those wanting to take public transportation, subway entrances led to who knows where … The Mets home-run apple also had an NHL Winter Classic logo slapped on it, in case anyone forgot what sport they were watching. 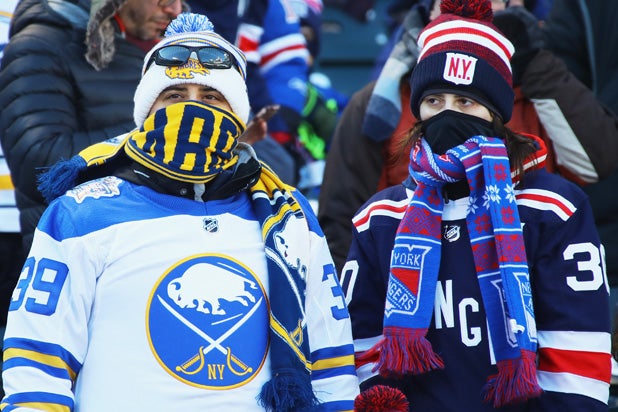 Buffalo Mafia in the house
Buffalo Bills fans are infamous for their crazy (and often drunken) antics during NFL tailgates, and it seems that Sabre fans are just the same. One daredevil jumped off the roof of a bus into a pile of boxes in the parking lot before the game even began! That was one way to keep warm. They didn’t quiet down during the game either, leading the loudest of the chants whenever the Sabres got control of the puck, with shouts of “let’s go Buffalo,” which could even be heard in the press box. A chant of “Bills made the playoffs” sparked a burst of laughter from the media (they’ve not made it since ’99).

Anniversary choir
The national anthem was sung by New York City-based Every Voice Choirs made up of children who were all born the year of the first Winter Classic game in 2008, which was between the Sabres and the Pittsburgh Penguins in what is now New Era Stadium in Buffalo. Their beautiful, melodic performance was joined by members of the NYPD, as the crowd removed their hats in respect (though many left their hoods up!) 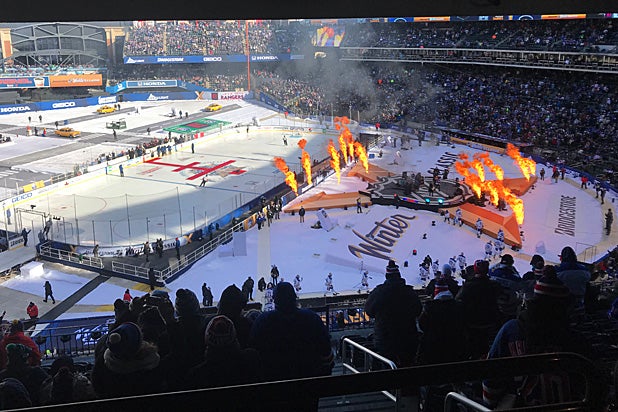 Fiery welcome
Not only were there NHL Hall of Famers playing in the game, but Rock and Roll Hall of Famers Max Weinberg — acting as the house band — and Ace Frehley — added their musical talents. Frehley performed “New York Groove” as the teams took to the ice. The show featured towers of flames that warmed up the chilly air.

Wayward eagle
A majestic  eagle was released during the national anthem and did a number of swooping laps through the air before heading down to rest on the wrong person. Luckily the skilled handler soon got him under control. It was an impressive way to begin one of America’s iconic sporting events. 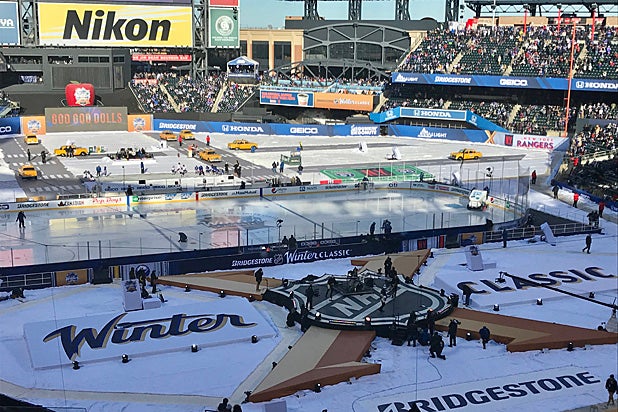 Local act
Buffalo band the Goo Goo Dolls performed a number of their hits, including the aptly-named song “Broadway” in the first intermission. The Grammy-nominated rockers are longtime Sabres fans and were also the headlining act at the official NHL New Year’s Eve party the night before. Frontman John Rzeznik seemed immune to the elements as he flew across the stage in a Sabres jersey (no bias there!) 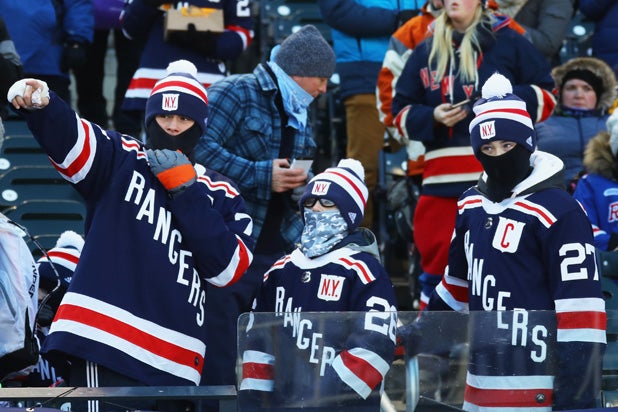 Escaping the cold
Clothing sales must have been through the roof, as many fans gathered in the official merchandise area to keep warm — and shop while they followed the game on various TVs. Many no doubt bought extra layers for insulation for when the sun went down and the mercury dropped even more. 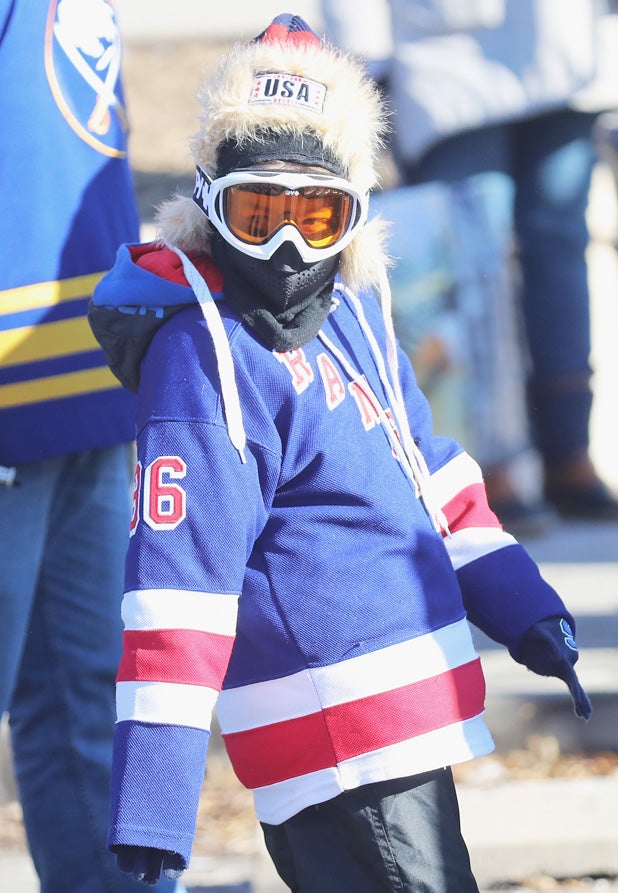 Girl power
Hockey isn’t just for the boys, as 20 girls from the “Hockey Is for Everyone” programs in Harlem, New Rochelle and Westchester participated in shinny hockey on the outdoor auxiliary pond at Citi Field during the Classic. 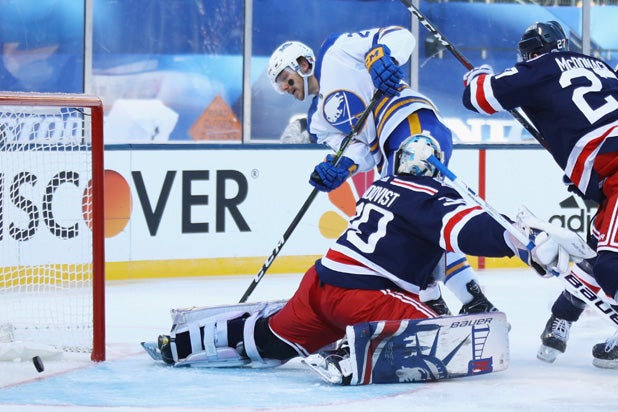 The Tom Brady of the NHL
The crowd exploded in cheers — and a few jealous boos — when Henrik Lundqvist (above), Rangers goaltender and undoubtedly one of the biggest names in the NHL, first took to the ice. The Swedish-born Olympian is the only goaltender in NHL history to record 10 30 win seasons in his first 11 seasons. Nicknamed King Henrik, he has also been featured in countless fashion magazines due to his model looks and cutting edge style. With the Rangers victory, the team’s winningest goalie remains perfect in outdoor games, completing 29 saves on 31 shots. 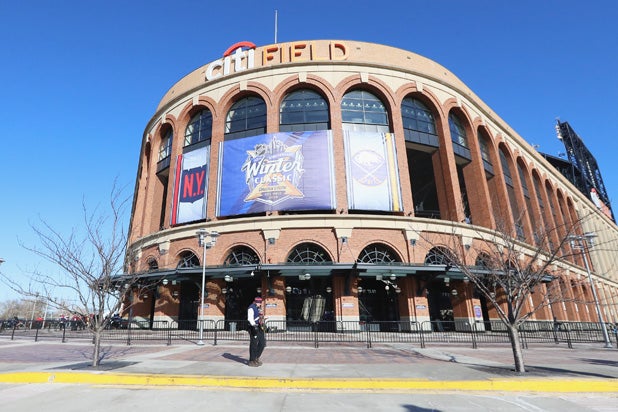 Road to PyeongChang begins at Citi Field
During the second intermission, players and coaches for the upcoming 2018 U.S. Olympic Men’s and Women’s Ice Hockey Teams and 2018 U.S. Paralympic Sled Hockey Teams were honored before they head to Pyeongchang in South Korea for the XXIII Olympic Winter Games.

David Bowie remembered
Max Weinberg and his band provided entertainment for the second intermission, even getting the ice crews up and dancing in their big, bulky coats when they played David Bowie’s hit “Rebel Rebel.” The fan favorite, however, was The Beatles’ “Twist and Shout,” which got an encore during the third period.

Frozen “Baby Driver”
Actor and diehard Rangers fan Ansel Elgort was among the famous, bundled up faces in the crowd. Let’s hope the “Baby Driver” star had a better day than two years ago, when he fell over into the aisle while exiting his seat during a Rangers-Blue Jackets game.

The Mooch sighting
Former White House communications director Anthony Scaramucci was spotted heading to a luxury suite with his family during the game. The Mooch had spent New Year’s Eve at Midtown steakhouse, Hunt and Fish Club, according to the New York Post.