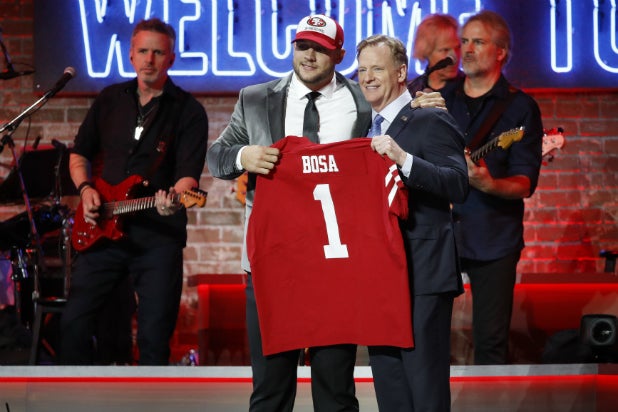 This draft had a combined 3.9 household TV rating and an average of 6.1 million viewers across linear television and digital platforms, according to Nielsen’s fast national numbers. That combined rating is up 11% and the viewership up 8% from 2018, when ABC also presented the whole thing.

On Monday, the NFL touted its draft telecasts combined to reach more than 47.5 million TV viewers across the event’s three days, which is up 5% from 2018, according to Nielsen’s fast total audience estimates.

The 2019 NFL Draft aired parts across ABC, NFL Network, ESPN, ESPN2 and ESPN Deportes, as well as on the NFL’s and ESPN’s digital and social properties.

“The 2019 NFL Draft was a tremendous continuation of the celebration of the NFL’s 100th season and an opportunity to welcome the next generation of stars,” NFL Commissioner Roger Goodell said. “Dramatic and emotional storylines played out in cities across the country with the energetic host city of Nashville serving as a breathtaking backdrop to hundreds of thousands of passionate fans who lined the streets and enjoyed a unique NFL Draft Experience. We congratulate our newest players and their families and thank the TN Titans, the Nashville Convention and Visitors Corp., the City of Nashville, the volunteers, and everyone who made the Draft such a memorable, entertaining, and successful experience.”

In addition to media consumption, the 2019 NFL Draft shattered records for attendance as more 600,000 fans fill the streets of Nashville to celebrate the newest class of NFL rookies, per the league. The NFL says the prior record for attendance was the 250,000 that showed up for Philadelphia’s turn two years ago.