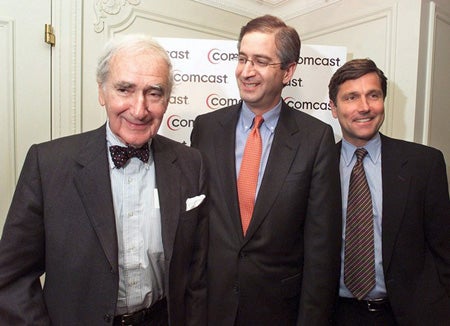 Steven Burke (above, right, with the Roberts clan) had a very nice day yesterday. The chief operating officer credited with engineering Comcast’s $37 billion buy of NBC Universal was given a new five-year contract with the cable and soon-to-be-content giant. The total package is worth $20 million. Burke’s been Comcast’s COO since 2004.

Not only that – Burke was also given a seat on the board of Berkshire Hathaway, Warren Buffet’s investment company.

According to observers, Burke has an inside track to becoming the next CEO of Berkshire when Buffet either “retires or dies.”

Well, for starters, he’s not considered a CEO candidate at Comcast because current chief Brian Roberts is the son of the company’s founder, and the two are roughly the same age. (That didn’t stop Comcast from locking up Burke for five years — or perhaps the potential pull of Buffet was the reason.)

The other reason: Burke’s father Dan is the president of Cap Cities ABC, whose partner, Dan Murphy, “is close to Buffett and sits on the Berkshire Hathaway board.”