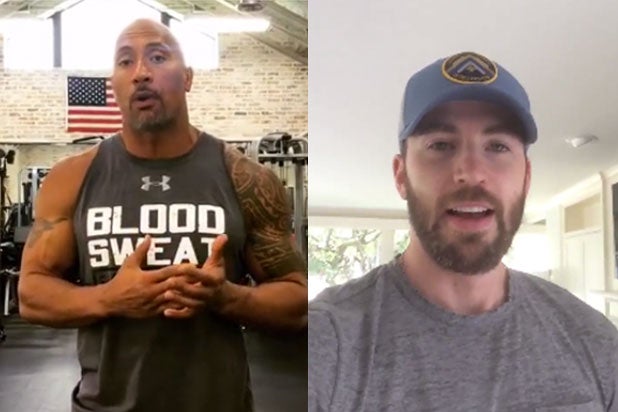 Dwayne “The Rock” Johnson, Chris Evans and Kevin Hart are just a few Hollywood stars who are taking part in a new viral call to action that is reminiscent of the popular Ice Bucket Challenge.

The 22 Push-Up Challenge, launched by military veteran organization 22Kill, asks people to upload a video of them doing push-ups, along with an explanation of why they’re participating. The organization wants to record at least 22 million push-ups in total.

The number in the challenge stems from the statistic that an average of 22 veterans commit suicide per day in the United States. The 22 Push-Up Challenge aims to raise awareness for the issue while honoring the men and women in service.

“#22PushUpChallenge Raising awareness for our 22 US vets who commit suicide daily. If you’re a vet and you’re going thru it, just know we’re thinking about you and you’re not alone. Be strong, have faith, keep fighting that good fight and there’s always a better day,” Johnson captioned on Instagram, accompanying a video of himself completing the challenge.

Chris Pratt, Scott Eastwood, and John Krasinski are just a few other Hollywood stars who have uploaded videos, increasing the odds that this is just the beginning of a popular trend starting to spread like wildfire across social media.

See Video: Oscar Isaac Takes ALS Ice Bucket Challenge on What May or May Not Be the 'Star Wars' Set

The official website for the organization stresses that it is not necessary to complete 22 push-ups if it’s not possible for you: “Every pushup counts so don’t be shy to show your support for our veterans. You can do as many or few pushups as you can or choose. Whether it’s 1 or 100 in a row, we will accept them however they come. They can be assisted (on your knees), incline (on a desk/wall), or if you physically are unable to do any, we’ll even take air pushups.”

Two years ago, the nation embraced the ALS Ice Bucket Challenge, in which participants dumped buckets of ice water on their heads to raise awareness and money for the disease. A Tech Times report stated that 17 million people participated, raising enough money to fund a research breakthrough.

See some Hollywood stars participating in the challenge below.

#22PushUpChallenge Raising awareness for our 22 US vets who commit suicide daily. If you're a vet and you're going thru it, just know we're thinking about you and you're not alone. Be strong, have faith, keep fighting that good fight and there's always a better day. I challenge my boys @kevinhart4real and @justinjames99 as well as our history making first black OLYMPIC Gold medalist in swimming @swimone13. Thanks to my bud @prattprattpratt for passin' the torch and Hobbs the beast for the bad breath kisses. I'll take em all day ????????????????????

I accept your #22pushupchallenge @therock and I now challenge @wayne215 Michael Ealy & @tstory88 …..Major salute to all of the soldiers that protect this country.

#22pushupchallenge raise awareness for our veterans. If you are suffering call 1-800-273-8255 @Ludacris Your Up! pic.twitter.com/i7lOE9UYpn