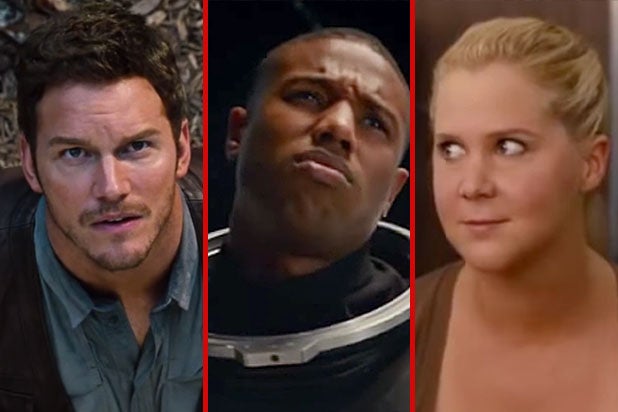 It was a big summer for dinosaurs, animated films and reboots — well, some reboots anyway, particularly if they starred Tom Hardy.

Overall, the box office was dominated by Universal and Disney, who together accounted for 61 percent of the nearly $4 billion collected so far.

But while the season is on target to become the second or third-highest grossing summer in history, the majority of the studios would probably opt for a do-over. Warner Bros. Paramount, Sony, Fox, Lionsgate and independent films all struggled.

Here’s a look back at the highlights and lowlights of the last four months:

Best Timing
Global grosses for “Jurassic World,” a sequel to Steven Spielberg‘s 1993 classic “Jurassic Park,” out-earned all the other throwback films combined to become the third-highest grossing movie ever, behind only James Cameron‘s “Avatar” and “Titanic.”

Worst Timing
Films that were remakes or new takes on decades-old film and TV hits failed to connect, including “Poltergeist,” “Vacation” and “The Man From U.N.C.L.E.”

Most Dino-mite Hit
The big lizards of “Jurassic World” resisted counterprogramming by appealing to young and old, males and females. A24’s sci-fi tale “Ex Machina” stirred up $25 million after its April release, and Roadside Attraction scored with “Mr. Holmes” and the Brian Wilson biopic “Love & Mercy.” But many intriguing indies were drowned out by the buzz around pricey popcorn movies. Ever heard of “Gemma Bovary,” “Tangerine,” Mark Ruffalo‘s “Infinitely Polar Bear” or Kristin Wiig’s “Welcome to Me”? We didn’t think so.

Spandex Score With an Asterisk
Disney’s Marvel superhero saga “Avengers: The Age of Ultron” conquered massive expectations and kicked off the summer with a $191 million opening, then went on to make $1.4 billion globally. But its hopes of breaking the original film’s record for a three-day opening were floored by a Floyd Mayweather-Manny Pacquiao boxing match on a Saturday night, which drew huge ratings on pay-per-view TV.

Hollow Follows
The summer was littered with sequels that failed to match the grosses of previous films, including “Ted 2,” “Magic Mike XXL” and “Insidious 3.” Reboots “Terminator: Genisys” and “The Fantastic Four” failed to deliver as well.

Also Read: Robert Downey Jr. Walks Out of 'Avengers: Age of Ultron' Interview After Reporter Asks About His Past Struggles (Video)

The Top Flop
Fox’s “Fantastic Four,” the $120 million reboot of the old-school Marvel series, may unravel an entire franchise despite the presence of some of Hollywood’s hottest young stars. In close second: Disney’s “Tomorrowland,” an original $190 million sci-fi saga directed by Brad Bird and starring George Clooney. Dishonorable Mention: “Entourage,” “Man from U.N.C.L.E.”

Bright New Star
Jason Mitchell drew raves for his portrayal of Eric “Eazy-E” Wright in the N.W.A biopic “Straight Outta Compton,” but none more telling than the one from the late rapper’s daughter, E. B. Wright, who called his performance “phenomenal.”

Big and Sharp
3D, Premium Large Format and IMAX Theaters got a major boost from action-heavy summer hits “Avengers: Age of Ultron,” “Jurassic World,” “San Andreas” and “MI:5” — which moved from Christmas in part to nab an IMAX run.

Best Four Play
Elizabeth Banks directed, produced and starred in “Pitch Perfect 2,” but Joel Edgerton topped that by writing, directing, starring in and producing the psychological thriller “The Gift” for STX.

Direct Hits
This summer’s top directors include Colin Trevorrow for his second feature, “Jurassic World,” and George Miller, whose “Mad Max: Fury Road” came 35 years after his first effort, “Mad Max,” and Pete Docter, who artfully took us inside the mind of a 11-year-old girl (yikes!) in Disney’s Pixar Animation hit “Inside Out.”

Fittest Second Fiddles
It was Charlize Theron, not Tom Hardy, that people were talking about when they walked out of “Mad Max: Fury Road.” But tough guy Jason Statham takes the big prize, after clicking hilariously in the Melissa McCarthy comedy “Spy.” Honorable Mentions: Rebecca Ferguson, “Mission: Impossible – Rogue Nation” and LeBron James in “Trainwreck.”

Golden Tea Leaf for Best Prognostication
While traditional tracking providers like NRG and Reel Pulse missing regularly — and almost always under — this summer, online ticket broker Fandango’s advance sales emerged as a surprisingly accurate gauge of box-office potential and its buzz-measuring Fanticipation service tapped the weekend winner 14 out of 16 weeks.

Most Welcome (and Welcomed) Return
Writer-director George Miller‘s 30-years-in-the-waiting sequel “Mad Max: Fury Road” was (along with “Shaun the Sheep”) the season’s best-reviewed movie and is closing in on $400 million at the worldwide box office. But it will be lucky to get into the black for Warner Bros. because of production delays and overruns on its $150 million budget.

Oh, the Horror
The creeper biz was crawling this summer as horror films either didn’t meet expectations (“Insidious: Chapter 3,” “Poltergeist,” “Sinister 2”) or missed badly (“The Gallows,” “The Vatican Tapes”). Remember though, horror films — especially those produced by Jason Blum — don’t need to gross much because they often cost less than $5 million.

Films That Didn’t Play in Low Altitudes
Two of the most buzzed-about movies to come out of Sundance this year were “Dope” and “Me and Earl and the Dying Girl.” Open Road quickly went wide with “Dope” while Fox Searchlight platform-released “Me and Earl,” but neither connected with mainstream moviegoers. “Dope” topped out at $16.6 million domestically, while “Me and Earl” hasn’t cracked $7 million.

Hottest Dog
“Max,” the Boaz Yakin-directed tale of a patriotic pooch who finds a home with the family of his master killed in battle opened with $12 million in June for Warner Bros. That’s better than the debuts of movies starring Sofia Vergara and Reese Witherspoon (“Hot Pursuit”), Bradley Cooper and Emma Stone (“Aloha”) and Meryl Streep (“Ricki and the Flash”). It’s up to $41 million domestically, double its budget.

Hottest Doc
“Amy,” the profile of the late soul singer-songwriter Amy Winehouse, was the highest-grossing documentary of the season at $7.6 million.

Best Calculated Decision
The Weinstein Company had just one release this summer, but it was a good one. “Southpaw,” the Antoine Fuqua-directed boxing saga starring Jake Gyllenhaal, Rachel McAdams and 50 Cent, has taken in $66 million on a $30 million budget. A hot soundtrack featuring Eminem, 50 Cent and Gwen Stefani and The Weeknd helped draw a young crowd.

Better Keep That Day Job
Supermodel Cara Delevingne landed the lead in “Paper Towns,” an adaptation of John Green‘s best-seller. The reviews were brutal and so was its sixth place, $12 million opening for Fox, then she made it worse with a cringe-inducing local news interview in which she sarcastically joked that she hadn’t read the script.