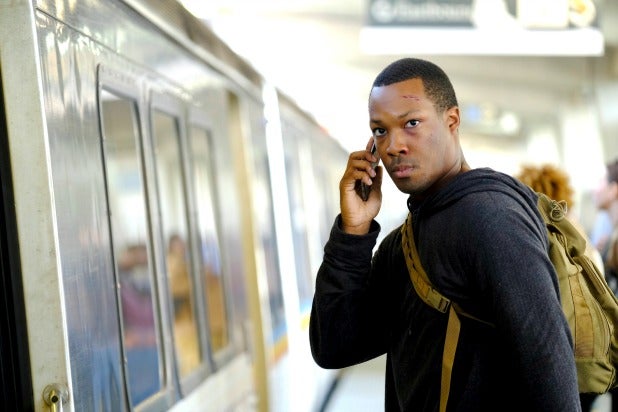 (Spoiler alert for the first two episodes of “24: Legacy”)

After two episodes of “24: Legacy,” it’s been exactly what you would expect from a show with “24” in the title. The bad guys are Islamic terrorists who are attempting to carry out attacks in the U.S., everybody does stuff that doesn’t make sense, the hero (Corey Hawkins, who is awesome as the new lead character) has a resting angry face, and it can’t help but end each episode on an obnoxious cliffhanger.

“24” basically invented the entertainment media’s obsession with having Islamic terrorists attack the U.S. (picking up the baton from Ed Zwick’s “The Siege” back in 1998). But 2017, in Trump’s America, it doesn’t really feel like the right time for a show to have that sort of focus. For one, it prevents “24: Legacy” from functioning as escapism given the incessant chorus from the right-wing government about the dangers of Muslim refugees (noting, of course, that the bad guys on “Legacy” did not sneak into the country by posing as refugees). It also comes off as insensitive and tone deaf for that same reason — do we really want another big network television drama to demonize Muslims? Especially now? James Poniewizik of The New York Times doesn’t think so, referring to “Legacy” as a “One-Hour Super Bowl Ad for Islamophobia” in the headline of his pretty good writeup. That’s been a common refrain since the show premiered after the Super Bowl.

It’s the inverse of how viewers were responding to the standard “we are all humans and Americans and we should love each other” rhetoric from commercials during the Super Bowl. There was nothing remarkable about them — ads have been like that for decades. Everybody’s favorite commercial ever, the “I’d like to buy the world a Coke” ad, aired way back in 1971. In 2017, that kind of stuff comes off as a dig at Trump and his nationalist regime. The ads haven’t changed — but the world has.

Likewise, “24: Legacy” isn’t doing anything that “24” proper didn’t do across its nine seasons (I’m including “Live Another Day” there). But the world is different now, and the Muslim terrorist angle gets less appealing by the day.

An important thing to remember about the “24” template is that events are rarely as they appear at the beginning — the show presents a basic conflict, lets it play out for a while, then turns it upside down. Often, this is about radical elements trying to bait America into war, or ruin a peace treaty that’s about to be signed or something like that, before it’s revealed that those dissident elements having surprising benefactors.

Like in season 8, when the U.S. was hosting a peace conference with a fictional “Islamic Republic of Kamistan.” Initially, the conference is interrupted by radicals from the Islamic Republic, but before long we discover that Russian hardliners and, as usual, a traitorous CTU agent are the real masterminds. It’s that formula that inspired me to put together a list of white characters on “Legacy” who might be a secret traitor.

With the exception of season 4’s surprising lack of complicated conspiracies, “24” has not featured a story that’s just Jack Bauer vs. the Muslims. The bad guys are myriad, and they come from everywhere — including the U.S. itself. Hell, season 5 turned out to be about the U.S. president pushing a false flag operation to try to justify a war, and season 7 saw an African despot storm the White House on the dime, and behalf, of a Washington-based defense contractor run by Jon Voight. “24” is just generally cynical and misanthropic.

The question for “24: Legacy” is not about whether its depiction of Islamic terrorists in the first two episodes is, divorced from the rest of the season, particularly offensive in the current climate. The question is, instead, if “24: Legacy” will have the cojones to pull the rug out from under its apparently by-the-numbers terrorist plot in a profound way.

Given that these particular terrorists kick off the series by murdering a bunch of former Army Rangers and their families in cold blood, it seems dramatically unlikely that the show could legitimately claim these guys are misunderstood antiheroes or something. But what it can do is bring out the “24” special — which would involve revealing that the entire terrorist threat is being facilitated behind the scenes by some white American.

Through two episodes, “Legacy has provided us with some easy suspects, like Henry Donovan (Gerald McRaney). But the secret mastermind doesn’t have to be someone we’ve already met. In season 7, Voight didn’t even show up until the second half of the season. “24: Legacy” could easily pivot in a new direction that better fits the pronounced empathic moral imperatives of art in 2017.

We saw the groundwork for a behind-the-scenes conspiracy on Monday — someone used a CTU director’s code to find the real identities of the Army Rangers who killed the terrorist leader Bin-Khalid, and Andy traced the code back to to computer of Nilaa Mizrani (Sheila Vand), Senator John Donovan’s (Jimmy Smits) Muslim presidential campaign manager. Mizrani is an obvious red herring, as she’s the character who exists to serve as the peaceful Muslim counterpoint to the radical terrorists.

So if it’s not Mizrani who is helping the terrorists, it’s someone else close to Donovan’s campaign. Which, unless it’s Donovan himself, means white people: Miranda Otto, who plays Donovan’s wife; Gerald McRaney, who plays his father; or someone who remains unseen, like Voight in “24” season 7. “Legacy” definitely feels like it has a strong pivot in its back pocket ready to go.

Let’s hope it does — both to help it live up to the legacy of the series that spawned it and to help, in some way, make the world a better place through art.

'24: Legacy' - Which White Characters Could Secretly Be Evil Traitors? (Photos)

There’s always at least one or two on each season of “24” (some spoilers ahead, and speculation)

"24" is back, sort of, in the form of the "24: Legacy" reboot that kicked off after the Super Bowl Sunday night. "Legacy" has all the hallmarks of "24," and if it stays true to form it should also have a secret white guy traitor -- a tradition that runs all the way back to Nina Meyers in season 1. We've already met two white terrorists: that Chechen high school girl and her teacher. Let's look at the other white people in the main cast who might turn out to be bad. Remember that there could be more than one.