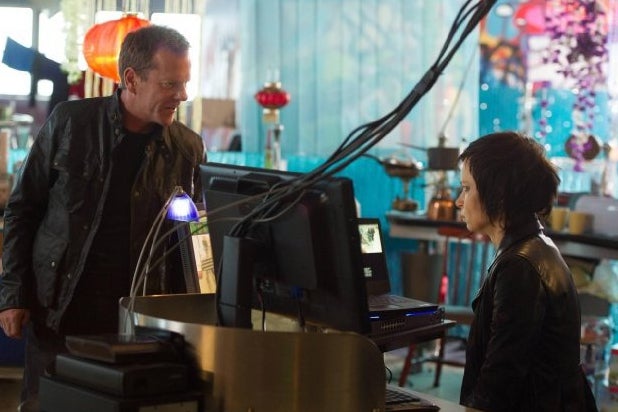 Fox’s “24: Live Another Day” has a familiar plotline, characters and format — and, hopefully for the struggling network, the entirety of its previously existing audience.

But the new event series, which debuts on Monday, was nearly trumped by a movie that was never made. The fact that a film didn’t come together is good thing, executive producers of the reboot told TheWrap. After all, 12 individual hours of real-time programming (representing 24 total hours of time) versus a movie’s two-hour run flows a lot better within the show’s trademark format.

Of course, the two iterations of “24” on TV won’t be completely identical anyway. The first time around, “24” had eight seasons, 195 episodes and a made-for-TV movie. This event series will have a dozen installments, leading executive producer Evan Katz to call the new version “not a sprint, [but] less a marathon.”

The real-time format means that “24: Live Another Day” will literally cover the events of “another day,” which recalls a burden for the writers: “[It’s] incredibly difficult … you can’t just cut to the good part,” executive producer Manny Coto told TheWrap.

Neither Katz nor Coto ever considered not being involved in the movie (which one could cynically argue is another reason they believe “Live Another Day” to be a superior idea) but they, like many “24” fans, expected that a movie version was coming.

And it still might come because of the new series — not instead of it — Coto said. “If the ratings are huge and people respond, who knows,” he said. “It could lead to a movie.”

What hero Jack Bauer (who doesn’t even speak a word for half of the debut episode) has been up to over the past few years is a bit of a mystery this time around. But what Chloe O’Brian (Mary Lynn Rajskub) has been up to — hardcore hacking and leaking of government secrets — will be far more in viewers’ faces.

“When I read in the script it just said, ‘Chloe like we’ve never seen her before,'” Rajskub said. “It wasn’t too specific … it was just ‘dark’ and ‘tortured’ and ‘in pain.'”

The result is goth, hacker Chloe — a look that took the actress a little while to warm up to: “Oh, people are going to think its ‘Girl with the Dragon Tattoo,'” Rajskub jokingly worried about her new look, which was the result of a ton of trial and error.

With so many challenges — including a network that is not exactly raking in the 2.8 rating average that “24” enjoyed in its final season — at least finding fodder for storylines was not too difficult in the WikiLeaks era.

“The world has been good to us in terms of providing storylines,” Katz said, citing Edward Snowden and Julian Assange as inspirations for characters and controversy in the now-London-based drama.

The network will find out over the next few weeks if topical drama and a franchise name is enough to match the 9.1 million viewers Season 8 pulled in per episode.

See video: ’24: Live Another Day’s’ Jack Bauer Puts Some English on His Return in New Promo

Fans should soak up the action now, while it lasts. The executive-producing duo said that this run will be one and done: “We’re approaching this as a single event, this is a closed story that won’t be left open,” Coto said.

However, Coto and Katz’s star doesn’t quite see it that way: “How could you NOT do another installment of the 12?” Rajskub teased.

“24: Live Another Die” premieres Monday on Fox at 8 p.m. with two one-hour episodes.