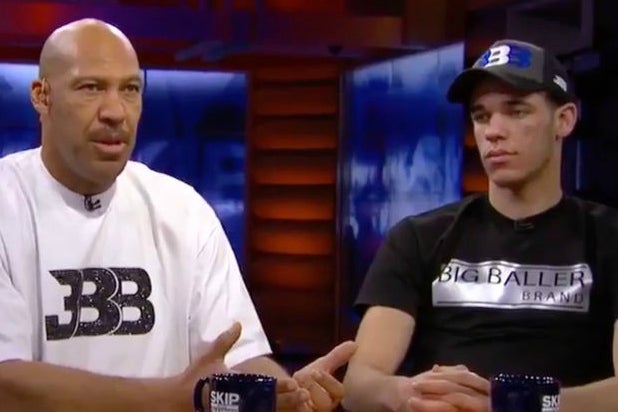 While the Boston Celtics won the NBA lottery on Tuesday night, giving the franchise the first overall pick in next month’s draft — the real winner across social media was clearly LaVar Ball.

The outspoken (to put it mildly) father of UCLA phenom Lonzo Ball — who appears destined to be drafted No. 2 by the Los Angeles Lakers — has become an internet sensation thanks to his outlandish comments and GIF-able mannerisms.

“Anything with Lavar Ball’s name attached to it is going to drive clicks,” Drew Ruiz, a contributor for Slam Magazine, told TheWrap. “He says the most wild things, man.”

Once the Lakers secured the second overall pick, and most likely Lonzo in the process as the Celtics are expected to take Washington guard Markelle Fultz, Twitter was flooded with LaVar memes.

And with the No. 2 pi — pic.twitter.com/5PuLmWF7EO

Ball Sr.’s comments soon followed, as he doubled-down on his previous claim his 19-year-old son would play for the Lakers because he would “speak it into existence.”

The former football player also made the brash proclamation that “the Lakers make the playoffs as soon as my boy gets there,” Bleacher Report reported. His younger sons, LiAngelo and LaMelo Ball, are both star players at Chino Hills High School, and are heading to UCLA “if you put Bobo the Clown in as coach,” their dad says.

For the uninitiated to the Lavar carnival, his internet appeal boils down to three core fundamentals.

1. He’s Loud
“It’s the brashness — the way he gives these one liners” that makes him the perfect fit for social media, according to Harrison Faigen, associate editor-in-chief of Silver Screen and Roll, a Lakers blog. His “punchy” quotes are tailor-made for Twitter.

Faigen pointed to Ball’s comments about Jason Whitlock, a national sportswriter who was critical of Ball after he told Fox Sports radio host Kristine Leahy to “stay in your lane.”

Lavar Ball: "Jason Whitlock can't comment on anything but snacks."

“If you’re the first person to transcribe it [what Ball says] and tweet it out, it’s going to get you a million retweets,” said Faigen. “What comes out of his mouth is generally gold.”

2. He’s Unpredictable
People are willing to click on a LaVar Ball story because he’s capable of saying anything. And it’s not going to be boring. Whether it’s saying his son is better than reigning two-time MVP Stephen Curry, or that he’d “kill” Michael Jordan in a game of one-on-one, Ball keeps topping himself when it comes to asinine statements.

It’s a cyclical — and cynical — process. Writers, radio hosts and TV shows fall over themselves to have Ball on their show. The more he speaks, the more often he goes viral, and the more likely he’ll be asked to come back — no matter how dumb his comments are.

3. He’s Polarizing
The audience for LaVar Ball content is divided into two camps: Those that love his loud personality, and those with a severe case of schadenfreude. As Ruiz puts it, “regardless of if you love him or hate him, you’re still going to talk about him.”

The trifecta of Ball’s persona goes beyond the realm of an obnoxious sports dad. There are plenty of those in every NBA draft, and you can’t name one from last year’s crop of players. It’s now become a weapon for Ball to utilize in his effort to build his nascent shoe and apparel company, Big Baller Brand.

Ball was widely clowned for having his “co-branding” pitch turned down by Nike, Adidas and Under Armour. After deciding to go solo, the jokes kept flying on social media when Lonzo revealed the $495 “ZO2” shoes he’ll sport next season. LaVar immediately fanned the flames, tweeting “If you can’t afford the ZO2’s, you’re NOT a BIG BALLER!”

“They’re taking a page from the Trump playbook: say outrageous shit, and you’ll cut through the noise,” Michael Bilello, CEO of Centurion Strategies, a public relations firm with NFL and NBA clients, told TheWrap. “Once you choose to [start your own company], the only way you’re going to get attention for this is to be extremely bold.”

Ball’s business prospects have now become inextricably linked to his ability to stay in the news cycle. To keep the free publicity flowing, he has to continue churning out tweet-able content.

But the long-term viability of his brash, social media-friendly game plan will ultimately come down to something he can’t control: how his son performs on the big stage in the NBA.