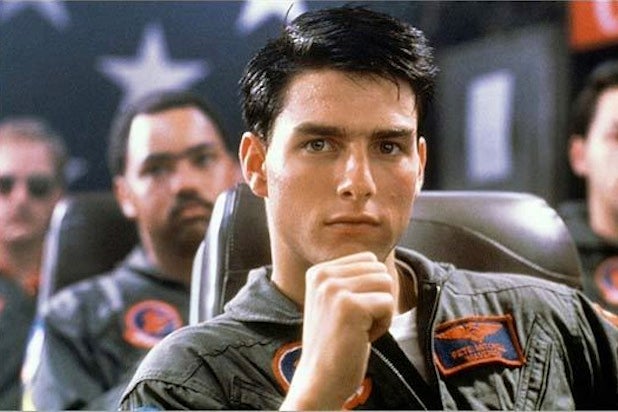 What’s more, the film’s soundtrack topped the Billboard albums chart and featured Berlin’s love theme “Take My Breath Away,” the winner of that year’s Best Original Song Academy Award (“Top Gun” was nominated for three other Oscars). And in 2015, the Library of Congress selected it for the National Film Registry, an elite honor that only goes to, you know, the top guns of film.

Scott’s only film credit prior to “Top Gun” was the dark and brooding art-house flick “The Hunger,” with Susan Sarandon and David Bowie. Needless to say, Paramount was nervous about making the film — which came close to never seeing the light of day.

A few of the key filmmakers are no longer with us, including director Tony Scott and Jerry Bruckheimer‘s producing partner, Don Simpson. But they left behind a legacy that should soon have audiences yearning all over again in a sequel that’s awaiting a green light.

Here are 30 lesser-known facts about “Top Gun,” in honor of the film’s 30th anniversary on May 16.

1. The role of Maverick was written expressly for Cruise — whose performance in “All the Right Moves” gave the writers inspiration for the part.

2. Cruise was reluctant at first to take the role of Maverick, but his mind was immediately changed after his first time up in the air with the Blue Angels.

3. Val Kilmer initially turned down the role of Iceman, until Scott tracked him down and passionately recruited him.

4. When it was in the casting phase, “Top Gun” became the hot title around town. Nearly all of young Hollywood men wanted to be involved, including a very young Charlie Sheen, who was said to be willing to take any part, even a small one. (He didn’t.)

5. Scott’s original vision for the film was “‘Apocalypse Now’ in an aircraft carrier.” He later realized it was a “definite popcorn movie … the rock ‘n’ roll stars of the sky.”

6. The original script called for Goose’s death to be the result of a midair collision. The Navy wouldn’t approve that, so they changed it to a scenario that was more plausible, depicting an accident that actually happened (but didn’t result in death).

7. The look of the actors in the pilot program was inspired by Bruce Weber photography, specifically his first book featuring scantily clad (and some nude) male models in a military theme.

8. The original title of the film was “Top Guns” — plural.

9. Kelly McGillis’ love-interest character, Charlie, was originally supposed to be an officer. But the Navy wouldn’t approve a script involving two officers fraternizing. Filmmakers needed the Navy’s involvement, so they changed her profession to that of a Navy consultant, one who assesses pilot performance.

10. Scott had to fight the studio to cast McGillis. Execs wanted a younger, “more fashionable” actress to play opposite Cruise.

11. Remember John Stockwell, who plays Cougar in a memorable scene at the beginning of the film when he gets so scared he struggles to land his jet? He’s gone on to direct sun-soaked popcorn flicks like 2002’s “Blue Crush,” with Kate Bosworth and Michelle Rodriguez, and 2005’s “Into the Blue,” with Paul Walker and Jessica Alba, along with the 2006 horror movie “Turistas.”

12. The famous love scene was shot after filming wrapped. Yes, there was no love scene in the script!

13. McGillis’ hair was different by that time, she recalled in a 2013 interview, so that’s why the sexy sequence made use of silhouettes and dim lighting. (McGillis’ wrong hairdo is also why she wore a hat in the elevator sequence, also part of reshoots.)

14. McGillis knew Kilmer before the movie, she revealed in the aforementioned interview. They went to Julliard together.

15. Encouraged by filmmakers, the cast partied a whole lot during the San Diego-area shoot, in order to get into character. “I remember it being one giant weekend, as far as making the thing,” Kilmer recalled in the film’s DVD commentary.

16. Hanging out constantly, the cast also played basketball and tennis and went to the driving range.

17. In order to keep their onscreen rivalry alive, either Cruise would join the group of partying cast mates or Kilmer would. But the two never hung out together.

18. According to Barry Tubb (Wolfman), the cast would pile into Kilmer’s van (a vehicle in which Kilmer claimed he lost his virginity). They would use it to “wreak havoc across the Mexican boarder” before racing back for their call time on set.

19. Kilmer ad-libbed the moment when he coughed the line “bullshit” in the hangar scene.

20. Pilot Art Scholl was killed while performing a stunt during filming. He intentionally dove into a spin to capture it on a camera mounted inside the plane and failed to recover, making impact with the Pacific Ocean.

21. Cruise was nervous and stressed, feeling the pressure of carrying the film. “He was as out of his depth as I was,” Scott recalled.

22. Edwards and Ryan, who play husband and wife in the film, also dated in real life.

23. Ryan was not Scott’s first choice to play Goose’s wife. The late director was initially reluctant to cast her because she had been a soap opera actress on “As the World Turns.”

24. The film originated from an article first published in California magazine.

25. Jack Epps Jr. wrote the movie with Jim Cash, his writing partner on films like “The Secret of My Success” and “Turner & Hooch.” Epps decided “Top Gun” was more of a sports movie than a military film after he went for a real jet ride. “Things happen with such force,” he said of experiencing six Gs of force in midair. “This was one of the greatest athletic things that I’ve ever been involved with in my life.”

26. The so called “Top Gun” award for which the pilots in the film compete doesn’t actually exist in the real Navy.

27. “We’re paying $1 million for Tom Cruise so we gotta show some flesh,” recalled technical adviser Pete Pettigrew of what filmmakers said regarding the need for a locker room scene.

28. Then-Paramount executives Jeffrey Katzenberg and Michael Eisner didn’t like the script. The film was sidelined until a new CEO, Ned Tanen, took over and greenlit it during a lunch meeting. He hadn’t even read the screenplay.

29. The actors who played pilots got certified and did a training course with the Navy, including riding in an F-14 jet. Rick Rossovich (Slider) earned the nickname “Rock” after he almost sunk like one in a pool during pilot training before filming.

30. The Navy reported a 500 percent increase in applicants to its aviation program after the film came out, according to the 2004 book “Operation Hollywood: How the Pentagon Shapes and Censors the Movies.”

The facts above that aren’t directly sourced came from the 30th anniversary edition Blu-ray/DVD of “Top Gun,” available now.