Since Donald Trump announced on Tuesday that he won’t be participating in Thursday’s Republican debate after Fox News’ refusal to remove Megyn Kelly as moderator, the candidate’s supporters have tweeted the word “c–t” at the Fox News host 34 times.

The word “bitch” was tweeted a shocking 423 times, while “bimbo” and “whore” were used 404 and 88 times, respectively. Data-driven media company Vocativ analyzed more than 80,000 tweets directed at Kelly’s Twitter handle from Tuesday to Wednesday morning, as well as looked at her Facebook page over the last month.

Trump’s supporters also used the words “hooker,” “slut” and “skank” in their rampage of tweets.

Also Read: Megyn Kelly Responds to Donald Trump Debate Boycott: 'I Will Be Surprised if He Doesn't Show Up'

About an hour after Trump announced he’d be a no-show at the Republican debate on Thursday, Fox News issued what the Trump campaign considered an incendiary response to the boycott.

“It should be clear to the American public by now that this is rooted in one thing — Megyn Kelly, whom he has viciously attacked since August,” Fox said about the GOP frontrunner’s decision to skip the debate.

Trump’s debate withdrawal came after he asked Fox to remove Kelly as a debate moderator and the network refused.

“Unlike the very stupid, highly incompetent people running our country into the ground, Mr. Trump knows when to walk away,” the Trump campaign said.

Kelly has since responded to the boycott, saying she would be “surprised if he doesn’t show up. Donald Trump is a showman, he’s very good at generating interest.”

See the infographic below. 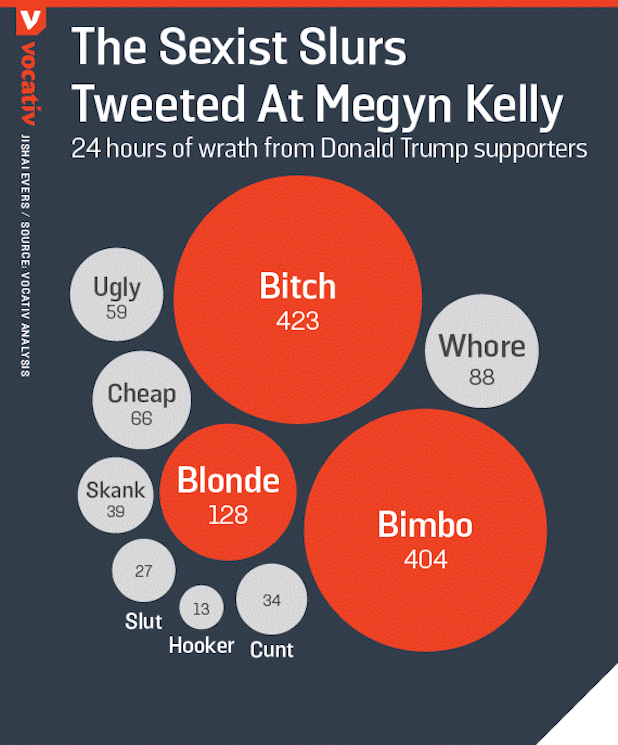 Following the GOP candidate’s call for a ”complete shutdown“ of Muslim immigration, the media has begun to push back — click through to see how