This morning one set of high-powered lawyers in the civil case of Matthew Krane vs. Haim Saban (pictured) prepared to move a multi-million dollar case from Austria to Los Angeles, while their equally super-charged opposites were set to do everything to keep the proceedings right where they wanted them to stay. In the land of Mozart.

But first, they all had to sit for hours on the hard benches of Dept. 64 in the Stanley Mosk Courthouse, waiting their turn, watching their rumpled, less-illustrious colleagues stumble through motions involving other cases in which the stakes were at most a couple of thousand dollars.

It couldn’t have been pleasant, sitting by as, one by one, Judge Kenneth Freeman impatiently interrupted, trying to get the lawyers to hurry along. 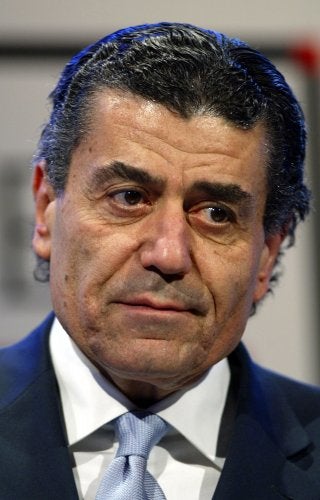 Fortunately for them, Judge Freeman was much more in a listening mood, when Century City super-lawyer Marty Singer addressed him on Krane’s behalf — more or less repeating the acerbic language of Krane’s complaint, which began:

“Haim Saban, believing he is above the law, has spent decades trying to avoid paying taxes on the many billions of dollars in income he has received, evidencing little restraint in his conduct other than seeking a convenient scapegoat.”

The trouble goes back to 2001, when media mogul Saban sold Fox Family Worldwide Inc. for a $1.5 billion profit and directed Krane, a prominent L.A. tax attorney, to set up a tax shelter for him.

Krane allegedly did so — pocketing along the way $36 million from the Quellos investment group for steering Saban’s business their way.

The feds, however, weren’t impressed with the legality of Krane’s handiwork. They stuck Saban with a $250 million tax bill.

They also arrested Krane for identity theft and passport fraud in 2008, later adding a money laundering charge in connection with the Saban case. Krane — whose brother Jonathan is a film producer (“Primary Colors,” “Swordfish”) — has sat in a federal lockup 14 months awaiting trial.

Saban, who produced the “Mighty Morphin Power Rangers” and other children’s fare for TV and film, is a well-known local philanthropist whose money built the Motion Picture and Television Fund’s Saban Center for Health and Wellness. He is also a major donor to the Democratic Party.

His lawyers successfully got Austrian authorities to freeze Krane’s $36 million, which had been placed in a bank in that country.

Today, Singer tried to get Judge Freeman to rule that Saban’s claims against Krane be moved to a California court from Austria, the case’s current venue, on the grounds that this is where both the defendant and plaintiff live, and where the original tax shelter plan was hatched.

Singer repeated the claim that Saban’s lawyers, who today included Sheppard Mullin Richter & Hampton’s Martin Katz, only chose Austria because that country has an “arcane” court system that does not allow for evidence discovery, as does the U.S.

Eventually, the judge realized he wasn’t hearing anything new from Singer.

"Your argument to me," Freeman told Singer, "is one of logic, not of law."

With that Freeman stayed the matter until Jan. 15, when the Krane lawyers will put in an amended motion to move the trial.