All right, so I’m ripping off Yogi Berra with that headline. Who doesn’t? What kid can’t remember a Little League coach reminding him, “Half the game is 90 percent mental” … which actually makes sense if you think about it! But that’s a story for another time.

Unfortunately, this is a sad story … and the results are likely to be as confusing for many in the industry for years to come.

But let’s recap: In 1947, the Justice Department entered into the so-called Paramount Consent Decrees, which banned “block booking” or, in layman’s terms, the right of the studios to own their own theaters (the Paramount in New York, the Fox in Westwood, etc.) because it kept competitors (who might happen to make better films, but had nowhere to show them) … out.

At the time, it didn’t seem important — except that television, which hadn’t been a factor before the war (the first TV broadcast was a 1940 Columbia-Fordham baseball game watched by, well, the dozen or so people in Manhattan who had experimental sets), was barely on the newly invented radar in ’48.

Unfortunately for the Tinseltown titans, TV came on faster than anyone could imagine. By 1950 — without the ability to control what you could see at their theaters anymore — the moguls suddenly found themselves running second in audience to recycled radio shows, Friday night boxing matches and Jack Benny.

So they did what they always do. Instead of making better movies, they started making bigger ones — that was the era of the famous “million-dollar movie,” the biblical epics (“Ben Hur,” “The Ten Commandments”) and, most importantly, 3D.

Oh, forget it — 3D was just the beginning. Before you knew it we had, heck, “Smellovision.” Some of you are old enough to remember the desperate slogan “Movies are better than ever.” They weren’t. and it didn’t work.

By the ‘60s, business was in the toilet and what movies worked were being made abroad.

That wasn’t necessarily bad — who could complain about England’s “Dr. No,” “Lawrence of Arabia,” “Alfie” or “Blow-Up,” France’s “Breathless” (starring American actress Jean Seberg), Italy’s “The Good, the Bad and the Ugly” (starring American TV star Clint Eastwood) or “The Pink Panther,” with Robert Wagner? 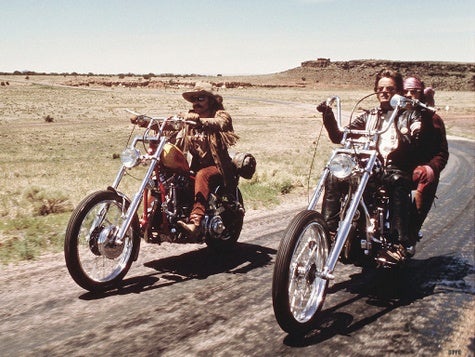 By 1969, almost all the so-called “big” American movies, including “Sweet Charity” with Shirley MacLaine and “Paint Your Wagon” (Clint Eastwood sings!), bombed, while a tiny movie made by a bunch of Roger Corman acolytes, “Easy Rider,” swept the Cannes Film Festival and the box office as well.

By the next year, Warner Bros. was up for sale, and before the decade was out, UA had disappeared, Columbia gave up its headquarters and moved to the Burbank Studios, and Paramount’s lot was for sale, with the studio moved to office buildings in Beverly Hills.

I’m reminded of this not by Jeffrey Katzenberg’s insistence that the “new” 3D will save the business (gimmicks just prolong the agony), but rather by a disturbing email I got recently from a real estate broker offering me “prime office space” on a now-emptying Paramount lot. When was the last time Paramount had space on its lot? Yes, it’s déjà vu all over again.

From the fiscal doldrums of the ‘70s, a brilliant man named Barry Diller rode to the rescue. Hired away from ABC, where he’d created the TV movie, Diller — a Beverly Hills native — was appalled to see what had happened to Paramount. He immediately ordered the studio back on the lot, ramped up production on a bunch of lower-budgeted movies known internally as “The Seven Samurai” — seven movies made for under $7 million each, or a total of $49 million, so that if one hit, it would pay for all the rest, and if two hit they’d be rich.

Well, two hit — “Flashdance” and “An Officer and a Gentleman,” both made by new filmmakers who hadn’t been spoiled by the old “bigger is better” phenomenon. Those successes allowed Diller to follow up with Academy Award winners like “Reds” and “Terms of Endearment,” not to mention other low-budget hits like “Footloose.”

Soon, the rest of Hollywood realized what they were missing and either began aping Paramount or just raiding them — Marvin Davis lured Diller to Fox, where he created the Fox TV Network; Disney stole Diller’s aide-de-camp Michael Eisner and protégé Katzenberg and became the hot studio of the ‘80s with the same low-buck, high-concept formula.

That’s where I come in, of course. When they left Paramount to take over Disney, Eisner and Katzenberg were smart enough to hire a bunch of executives unspoiled by the old, “bigger-is-better” school of thought. And while I was far from a huge success at Disney, I did take the lessons I learned to companies like Michael Douglas’ Stonebridge Entertainment, where we made a high-concept hit like “Flatliners” for $15.9 million and grossed more than $150 million — a “10-bagger” as they say on Wall Street.

Similarly, on my own I could produce a picture like “Shadow Hours” for an original budget of $1.9 million and watch it become the No. 1 seller at Sundance that year for more than $6 million — or three times its cost.

Unfortunately — déjà vu — those days are, á là the ‘50s, over. For the great untold truth is that what really killed the film business in the ‘50s and ‘60s was not creativity but the loss of the studio’s captive audiences (their theaters) and the rise of TV, which they didn’t control. And as brilliant as Barry Diller was, what allowed him to revive Paramount and, later, Fox (and, through his intellectual heirs, Disney) was another sea-change — the rise of cable, video and then DVDs that provided a cushion for their risk-taking, successful or not.

Once again, like the ‘50s, those days are now ending — new viewing platforms that the studios don’t control on the internet and elsewhere are stealing their exclusivity (not to mention profits) even as Hollywood Video folds, Blockbuster is on life support and Redbox steals profits from everyone.

And just like the ‘50s, when the studios first lost control of their means of distribution, today they’re resorting to the same old, bigger-is-better philosophy (what did “Robin Hood” cost to make and market? $250 million?) or gimmicks like 3D.

It didn’t work then, folks, and it won’t work for longer than a year or two now. I recently wrote in this space about the declining health of Dennis Hopper. Just as Paramount rents out (once again) its quickly emptying lot, MGM finally disappears and Lionsgate is swallowed up by Carl Icahn, some new Hopper will emerge with today’s “Easy Rider” and show us once again how it is all done.

Till then, all I can wish all of us making a living in the film business is, to echo another ‘50s pundit, Edward R. Murrow, “Good night and good luck.”

They are hiring in Chatsworth, though, I hear.