Despite arriving a decade too late, there’s a version of the small-town coming-out comedy “4th Man Out” — about a young, gay Average Joe whose friendship with his blue-collar buddies is tested by his newly announced sexuality — that could feel relevant. But first-time director Andrew Nackman’s emotionally shallow, vaguely misogynistic take isn’t it.

Foul-mouthed yet ultra-tame, this bromance might have made a progressive-for-its-time companion piece with “Friends,” that gay panic-fueled ’90s TV staple. Many of the jokes — and later, a plot point — hinge on auto mechanic Adam’s (Evan Todd, “Grumpy Cat’s Worst Christmas Ever”) possible attraction to his pals.

Every last effeminate character is a cartoon nightmare of a sissy, suggesting a “right” and “wrong” (or at least a “desirable” and “undesirable”) way to be homosexual. And the film is disappointingly timid about showing the very thing it’s championing: same-sex desire. For all the talk of Grindr and club hook-ups, poor Adam only ever gets one make-out — and even that ends in flatulent calamity.

Too scared to come out on his alcohol-soaked 24th birthday as he’d planned, Adam blurts it out the morning after. His best friend Chris (Parker Young, “Arrow”) immediately throws up — and I don’t want to meet the person who laughs at this gag, even though Aaron Dancik’s script clearly intended it to be hilarious. (Chris explains it was just his hangover.)

Adam’s friends are the kind of lugs who can’t believe that a guy who eats steak for dinner would also want to have sex with other men. Bearded slobs Nick (Chord Overstreet, “Glee”) and Ortu (Jon Gabrus) are the most convinced that, naturally, Adam is constantly eye-banging them. (The jokes are on them, but also far from funny.) Chris knows better, but he, too, can’t help giving into doubts, especially when his harpy girlfriend Jessica (Jordan Lane Price) insists that Adam wants him bad.

In addition to the Irish-Catholic, purple-state milieu, we’re in sitcom-hijinks territory. Clued in about Adam’s sexuality, the neighboring church lady begins to suspect that he and his three friends are all gay and sleeping with one another. She bakes Adam a Virgin Mary cake to… sweeten his gay away? In one of the film’s better — but still barely amusing — lines, Ortu riffs that what the neighbor’s conversion cake could have used to have its desired effect is a big ol’ rack for the Mother of God. 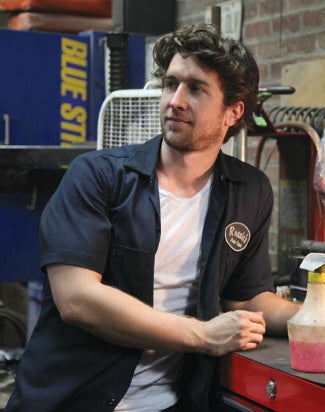 After a string of bad online dates, Adam finally meets a client at the auto shop that he can see himself with — then flubs the interaction by flirtatiously admitting to the guy that he sniffed the ChapStick in the glove compartment. It’s a bizarre, implausible line — and yet it works, because despite being in his mid-20s, long-closeted Adam’s still a teenager when it comes to dating. It’s one of the very few emotional insights about the very condition the film’s devoted to depicting — and gleefully married in this instance to the script’s love-hate, gross-out approach to bodies.

But “4th Man Out” barely cares about Adam’s romantic life, because it’s too busy dwelling on straight Chris’. Jessica’s the kind of unimaginatively terrible girlfriend who only exists in movies and reality shows about teenage bridezillas, and so there’s a barely engaging slog to get through about Chris’ journey toward Tracy (Jennifer Damiano), a girl who’s perfect because her interests line up with your average dude’s (beer and “Ghostbusters”).

Perhaps there’s comfort to be derived from this crowd-pleaser’s portrayal of the advantages of being gay in a small town. (The film took home Outfest’s audience award last year.) The simple act of coming out was how homophobic ignorance and prejudice were overcome so rapidly in the last couple of decades, after all: Ellen DeGeneres made headlines when she came out less than 20 years ago, and now she’s everyone’s mom’s favorite daytime star.

“4th Man Out” is certainly relevant to someone in America today. But, like Chandler and Joey jumping two feet in the air every time they accidentally touch hands, it’s probably retrograde to many more.

TheWrap takes a look at the hot commodities at this festival, from John Krasinski’s ”The Hollars“ to the documentary ”Holy Hell“