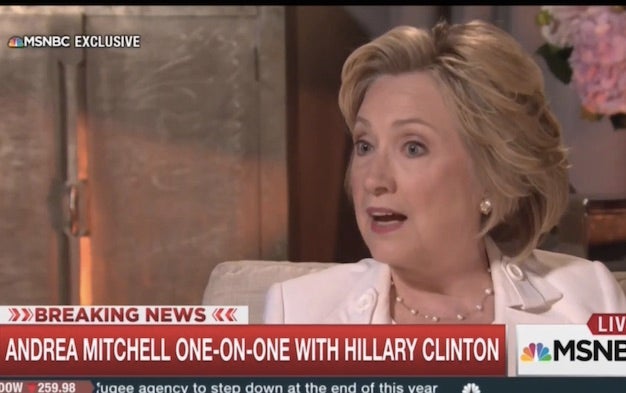 In her second national broadcast interview of the 2016 presidential campaign, Hillary Clinton sat down with MSNBC’s Andrea Mitchell to try and set the record straight on the email controversy swirling around her for months.

She also touched on the “unfortunate development” that is GOP frontrunner Donald Trump as well as the potential of Vice President Biden to become her latest Democratic challenger (by not really addressing it at all).

Here are the 5 biggest revelations from Clinton’s MSNBC sit-down.

Mitchell pressed the former Secretary of State twice on whether she wanted to apologize to the American people for using her private email server instead of a government one while at the State Department; Clinton evaded.

“I certainly wish I had made a different choice, and I know why the American people have questions about it and I wanted to make sure that I answer those questions. When Mitchell tried again, she got the same record player: “It wasn’t the best choice.”

It will serve Clinton to have a less rehearsed answer that appears more introspective during the first Democratic presidential debate in October.

Clinton took on the Donald for his “innuendo, conspiracy theories and really defaming people.”

“It’s an unfortunate development in American politics that his campaign is all about who he’s against, whether it’s immigrants, or women broadcasters, or aides of other candidates,” she said.

“He is the candidate of being against,” she continued, claiming he is the opposite of her vision for bringing Americans together.

3. I am Just As Cool as Bernie and Donald!

Responding to a question from Mitchell about the perception that she is “lawyerly” compared to Donald Trump and the rising, more authentic Bernie Sanders, Clinton gave, well … a lawyerly answer.

“That’s just not my experience out campaigning, I feel very, very, good about where we are,” she said, pointing to the strong organization her campaign has built without mentioning Sanders or Trump by name.

4. Don’t talk to me about Joe Biden

If Hillary is worried about a potential Biden entry into the race, she has a good poker face.

“I’m not going to address any of the political questions around my friend Joe Biden — he has to make a really difficult decision,” she said, wishing the Vice President and his family well in the aftermath of his son Beau’s death.

“I think everybody should give him the space and respect he deserves to make what is a very difficult decision for himself and his family.”

When Mitchell asked Clinton how she feels about being called a liar by the masses, Clinton denied being one.

“Certainly, it doesn’t make me feel good,” she said, adding she’s confident that by the time this campaign has run its course, “people will know that what I’m saying is accurate.”

“At the end of the day, I am sorry that this has been confusing to people and has raised a lot of questions, but there are answers to all these questions. And I take responsibility and it wasn’t the best choice.”