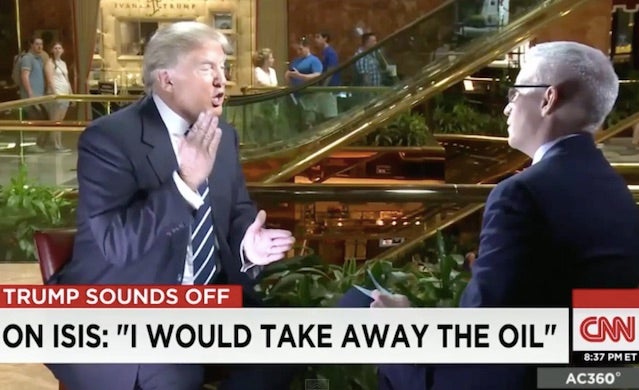 In classic Trump fashion, he attacked everyone from Cooper to Hillary Clinton, Jeb Bush and Rick Perry. He also had compliments — for Bush’s wife, at least.

“Anderson when you have to go back 35 years to tell me about something, I think that’s pretty pathetic to be honest with you,” Trump said in response to Cooper probing him on Polish workers with questionable immigration status that worked for him.

Cooper kept calm and carried on, unfazed by the jab.

2. Hillary Clinton was the worst Secretary of State in history of United States
For Republican candidates, the road to the White House most likely runs through Hillary Clinton–and Donald Trump isn’t mincing words.

“She was the worst Secretary of State in the history of the United States,” he said. On why he would donate to someone he holds in such low regard, Trump answered, “I was a businessman… that’s part of the game, and that’s part of what’s wrong with this country.”

3. Illegal immigration is killing the country, but I can’t guarantee I don’t employ them
When pressed on reports that his construction sites employ illegal immigrants, Trump deflected, suggesting he hires contractors who then hire subcontractors, making it impossible for him to know if all his workers were legal immigrants.

“I can’t guarantee it, we have 34 million in the country,” Trump said in response to whether he can guarantee he doesn’t have illegal immigrants working for him.

[For the record: TheWrap looked at a bulk of studies which suggest there are 11 million illegal immigrants in America.]

4. I hear Jeb Bush’s wife is a “lovely woman”
Donald–haven’t you ever heard not to talk about another man’s wife on national TV?

That’s exactly what the real estate mogul did when asked about whether he regrets retweeting a tweet that said Bush liked illegal immigrants because of his Mexican-American wife.

“I don’t regret it,” Trump said, suggesting if his wife was from Mexico, he’d probably have a soft spot for Mexicans too.

He went on to subtly imply that Bush was sympathetic to Mexican immigrants because of his wife, who he hears is “a lovely woman by the way,” Trump said.

5. “There is no Iraq”
Trump foreshadowed bombing Iraqi oil fields to wage war on ISIS. When Cooper pressed him on whether that would harm the wealth of Iraq, the Donald countered, what’s Iraq?

“Excuse me, there are no Iraqis, they’re broken into so many different factions,” Trump responded, doubling down that he’d “bomb the hell out of those oil fields.”

Watch the interview below, and then have more fun at the presidential candidates expense by watching a stirring game of “Who Said It? Donald Trump or Mr. Burns.”