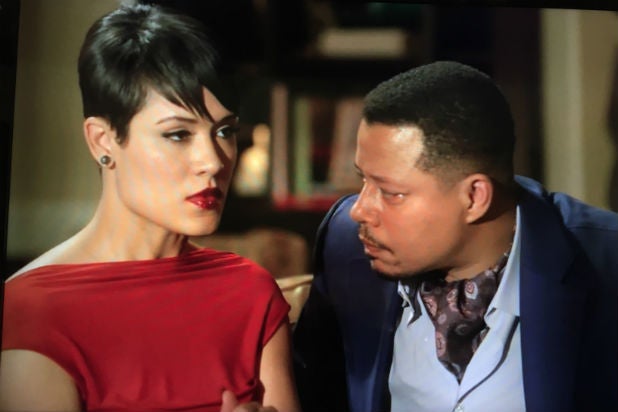 (Spoiler Alert: Please do not read on if you haven’t watched Wednesday’s episode of “Empire.”)

Lee Daniels‘ “Empire” has rapidly turned into must-see TV, and Wednesday night’s episode did not disappoint.

The Fox drama’s ninth installment titled “Unto the Breach” got off to an explosive start as Cookie outed Anika as a traitor, spiraling the Lyon family and Empire Enterprises into a crisis.

1. Cookie exposes Anika
Viewers quickly learn the extent of Anika’s (Grace Gealey) betrayal within the opening minutes of Episode 9 when Cookie (Taraji P. Henson) and Porsha burst in on her with fiancé Lucious (Terrence Howard) while planning their wedding. “She’s playing you,” Cookie  announces as she reveals that Anika has secretly been working with Billy Beretti. “You in the middle of getting your ass gone … this bitch is planning how to steal everything you’ve got,” she said. Cookie and Anika’s dislike for each is no secret, and she clearly takes pleasure in chasing her nemesis out the door. “Bye, Felicia!” she screams as she exits.

2. Family in Crisis
As his impending nuptials fall apart, Lucious calls the Empire team together for an emergency meeting and puts the office in lockdown, bluntly declaring they are at war. “The heart of Empire is family. When any family is in crisis, they put their differences aside and come together,” he tells his staff. “We have less than 24 hours to assure these streets that Empire is stronger now then its ever before and it can keep the artists it has.”

3. Beretti shows his emotional side — for a moment
Judd Nelson is cool, calm and collected as the owner of Creedmoor Entertainment, and reveals how Lucious was the first artist that he signed after his son died. “Then he took the money and ran,” he tells Anika, as he reveals that his son succumbed to leukemia when he was 9 years old. The warm and fuzzy moment doesn’t last long, however. “Tell me what I need to know about Lucious to take him down,” he demands. “Is he gambling again? Doing drugs?”

4. Guns are drawn between Beretti and Lucious
The two music moguls come face-to-face with their armed entourages backing them up, as Beretti boasts: “I’ll produce all the hits but the artists will be the stars.”

“That’s what you hate about us, and that will be your tragedy,” said Lucious in return, as guns are drawn when the standoff turns to the topic of Anika. “I got what I needed from her and I got rid of her,” he tells Beretti — who then points a gun right at his chest, but that still doesn’t stop any wise-cracking.

5. Andre goes off his medication with disastrous results
After Andre (Trai Byers) flushed his bipolar medication down the toilet at the beginning of the episode, we later see the heartbreaking results as he explodes on his family in the boardroom. “Andre doesn’t have to relax, Andre is carefree baby,” he rants, while charging around the room as Lucious tries to calm him down.

“Touch me and I’ll kill you,” Andre threatens his brother, before paramedics rush in and are forced to sedate him. They ask Lucious to sign a 48-hour hold as next of kin, but he passes the burden off to Rhonda.