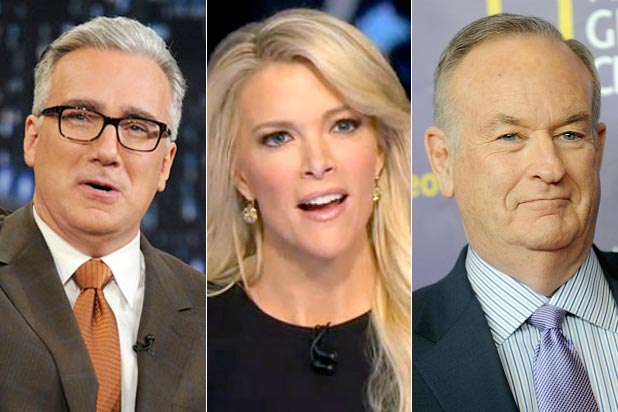 TheWrap’s presented 2015’s media winners and losers, but there’s a whole other crop of personalities and outlets destined to spark headlines in the New Year.

Some have been out of the spotlight for awhile while others are one right move away from megastardom.

Here’s the five media players to look out for in 2016.

1. Keith Olbermann
It’s a presidential election year involving Donald Trump, Ted Cruz and several other colorful GOP players — and you expect Keith Olbermann to be lying on the couch watching the spectacle from a distance?

The two-time ESPN host, former MSNBC star, and flash-in-the-pan Current TV host will return to the airwaves somewhere, either on TV or the web.

Even with drama and heavy baggage taken into consideration, Olbermann’s simply too talented not to be poached by a political outlet looking to make a big splash in 2016.

The most likely candidate: MSNBC, which has been set to shake up Olbermann’s former time slot — now inhabited by Emmy winner Chris Hayes — forever. Reports in recent months suggest the two sides have already had talks, so as Rachel Maddow says best, “Watch this space.”

It drew the ire of conservative outlets and personalities, like Bill O’Reilly and Glenn Beck, while forcing major coverage of stories such as the police shootings of African American youths like Freddie Gray in Baltimore and Laquan McDonald in Chicago.

The movement has also played a role in the 2016 election, forcefully interrupting a Bernie Sanders rally and demanding to speak to Hillary Clinton and Jeb Bush.

Unfortunately, recent history forecasts increased tension and violence between police and African Americans fighting against what they deem are endemic injustice against them, making Black Lives Matter primed for an even bigger spotlight — and impact — in 2016.

3. Fox Fight? Bill O’Reilly vs. Megyn Kelly
Fox News is going on 15 years as the No. 1 cable news network, and Bill O’Reilly‘s dominance has been the driving personality behind it.

But Megyn Kelly’s star has been on the rise since inhabiting the 9 p.m. ET slot two years ago. In the third quarter, Kelly beat O’Reilly in the advertiser-coveted 25-54 demo, snapping his 10-year streak (Fox’s record-breaking GOP debate helped lift Kelly’s numbers).

O’Reilly is a notorious ratings hound, making Kelly’s rise a threat for the king of cable news, who’s not retiring anytime soon.

The beginning of a sea of change at Fox News makes both of its stars must-watch TV in 2016.

4. Washington Post
The New York Times-Washington Post feud heated up in 2015 as the Post closed in and then surpassed the paper of record’s digital audience numbers.

In November, the Post’s website reached another all-time high for the third straight month, totaling 71.6 million unique visitors, beating the Times, which had 66.9 million.

More impressive, the Jeff Bezos-owned paper is closing in on CNN.com and BuzzFeed, which had 73.6 million and 75.3 million unique visitors in November, respectively.

Aside from impressive growth, there’s a Post staffer all journalists should continue to look out for and keep in the news throughout 2016.

Jason Rezaian has been imprisoned in Iran’s Evin Prison for over 500 days on fraudulent espionage charges. Sentenced to an unknown prison term in October, Rezaian’s ordeal will continue to keep journalists writing and acting throughout the year.

And let us not forget…

5. Barack Obama’s Fourth Quarter
Ever the NBA-enthusiast, President Obama will preside over his last full year in office in 2016 and doesn’t seem to be the kind to take a backseat to the presidential campaign spotlight.

Daily saturation coverage of the Obama administration concluded months ago as the campaign took centerstage, but this is a president unlikely to rest on his laurels.

Obama has made more regular use of his executive actions authority recently, and enraging Republicans in the process. He’s hinted at taking unilateral action to tighten loose gun laws and still has eyes on fulfilling his original promise to close Guantanamo Bay prison.

The 44th president cares about his legacy, so expect him to fight for the camera rather than lying back and running the clock out.