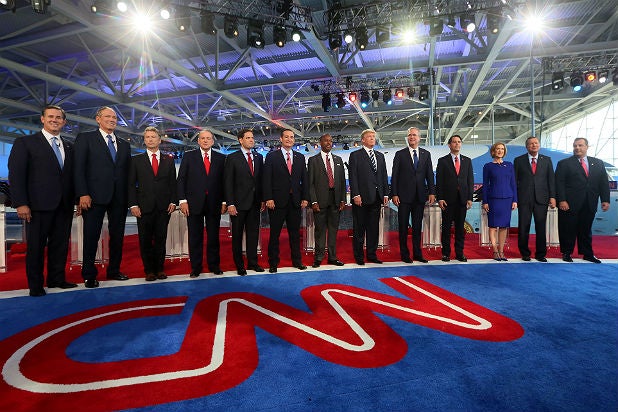 The second GOP presidential debate Wednesday on CNN produced a sea of soundbites along with several substantive moments.

Donald Trump opened strong but remained relatively tame most of the night, while Carly Fiorina and Jeb Bush both came out of the gate ready for battle and got in some strong zingers against the GOP frontrunner.

Here are the 5 most explosive moments.

1. Trump Opens Strong, But Dials It Down Later

The GOP frontrunner opened by saying Senator Rand Paul is at “1 percent” in the polls and doesn’t belong on the stage, drawing noticeable groans from the crowd. He also gave a classic Trump resume opener. “I say not in a braggadocious way, I’ve made billions and billions of dollars dealing with people all over the world.”

The attack right off the bat gave viewers the impression that the outspoken former “Celebrity Apprentice” host had arrived for the second debate. But the GOP frontrunner stayed mostly calm, cool and collected for the remainder of the evening, mostly playing defense.

Trump did get in a little sparring with Jeb Bush, Scott Walker and Carly Fiorina, slamming her tenure as head of Hewlett-Packard.

Her leadership at the firm “led to the destruction of the company,” he said. “She can’t run any of my companies — that I can tell you.” But even when many pundits have dismissed him as a bully, Trump has rebounded in the polls. This debate performance should be no different.

2. Bush Comes Out Swinging Against Trump

Jeb Bush was anything but low energy tonight, coming out more aggressive against Donald Trump.

“He supports [Nancy] Pelosi, he supports Clinton, he supports Schumer,” Bush said about the real estate mogul. Trump countered with his usual line about getting along with everyone as a businessman.

Bush also took aim at Trump for his endorsement of a negative tweet about the former Florida governor’s Mexican-American wife. Bush called on Trump to apologize to his spouse, who was sitting in the audience. Of course, the Donald did no such thing.

To wrap up the debate, Bush dropped in a high energy joke, even slapping hands with Trump.

Also Read: Donald Trump Deletes Tweet About Jeb Bush's Wife: You Like 'Mexican Illegals' Because of Your Wife

In a highly unscientific reporter’s eye test, Fiorina got the most applause, most frequently for her comments on Iran, the economy and of course, Donald Trump.

On Trump’s attacks on her looks, Fiorina was unwavering: “I think women all over this country heard very clearly what Mr. Trump said.”  Trump countered that she has “a beautiful face” and is a beautiful person.

Many social media users agreed that Fiorina’s performance was strong. She’ll likely be among the favorites of the political pundits during Thursday’s post-debate analysis.

Annoyed by the time being sucked away during the ongoing Trump-Fiorina tit-for-tat, Chris Christie went off on the “childish” games.

“They can care less about your careers, they care about theirs,” Christie said about struggling American workers not needing to hear monologues on Trump or Fiorina’s track records as CEOs.

The New Jersey Governor got a round of applause from the debate, but his performance isn’t likely to lift him from low single-digit poll numbers.

In a continuation of the Trump/Bush battle, the GOP frontrunner slammed George W. Bush for giving America Barack Obama. According to Trump, the last few months of Bush’s administration were such a disaster that voters ran from Republicans and elected a Democrat as president.

The moment might help Bush in the post-debate pundit analysis, but is an attack ad waiting to happen from the likes of Hillary Clinton?