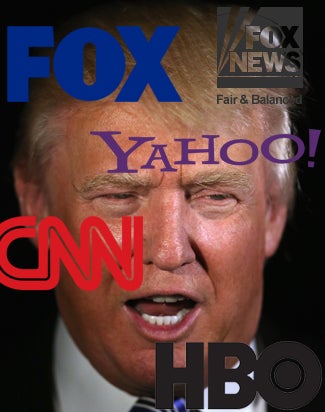 Most political pundits think he’ll never get the chance: kind of hard to win the presidency if you’ve alienated the fastest rising demographic in the country–Latinos.

But now that NBC has fired The Donald–or he fired them, according to Trump–the former “Celebrity Apprentice” star will be on the market if and when his presidential run flames out. And there will be suitors.

1. Fox News
With Mike Huckabee leaving the network for his own presidential bid, Fox could be looking to fill the vacuum of political-media hybrid. Most media experts would suggest Trump wouldn’t connect with FNC’s heavily midwest and southern viewer, but his presidential run might change that as he evokes positions friendly to those two regions.

Most importantly, love him or hate him, Trump is must-see TV. He’s got the bravado cable news viewers tend to gravitate too, and Trump gives Fox a voice prone to going up against both parties, potentially setting up a ratings rocket to go after potential presidents Hillary Clinton or Jeb Bush.

Another advantage for Fox in tabbing Trump would be his ability to contribute cross-network: Trump could certainly have a show on both Fox News as well as contribute specials for Fox Business, which has tried to bring in bigger names over the years like Maria Bartiromo.

2. CNN
This scenario would hinge on Trump softening his stance on Mexico, to avoid alienating a large swath of viewers domestically and internationally. With that assumption, Trump fits on CNN in a number of scenarios.

Trump could make an Apprentice-style reality show for the network, fitting into its original series strategy that’s been a success over two years. From real estate to entrepreneurship, Trump provides a variety of possibilities for  show formats and topics.

He also could boost other shows, appearing as a guest across primetime and host specials.

3. Fox
Fox broadcasting is a possibility, owned by Rupert Murdoch and eager to find a signature reality show to compete with ABC, NBC and CBS.

With hit show Empire boosting the network this past season, an Apprentice-like program with Trump could add another signature program to the lineup. Under the 21st Century Fox portfolio, Trump could also cross over to do specials for Fox/Fox Business.

4. Yahoo
The search-engine giant continues its quest to become a digital news and entertainment player. With Katie Couric as its biggest name to date, Trump would instantly become the face of Yahoo, giving it versatility to offer reality series in addition to its news programs and specials.

Like with CNN, Trump would have to backtrack on his controversial statements about Mexico to even get a sniff of Marissa Mayer’s office, but the Donald knows what to say when he has to.

Yahoo could also offer one of the bigger paydays to the billionaire real estate mogul; Couric just re-signed for a cool $10 million annually, a number Trump wouldn’t likely land in a cable news role.

5. HBO/Showtime
If Trump wants to say whatever he damn well pleases, premium TV might be the place to be.

HBO’s never been one to shy away from polarizing loudmouths, i.e. Bill Maher, and could position Trump as a weekly variety show host or do a more gritty version of “The Apprentice.” Ditto for Showtime.